New York funeral home accepts bodies while others are full 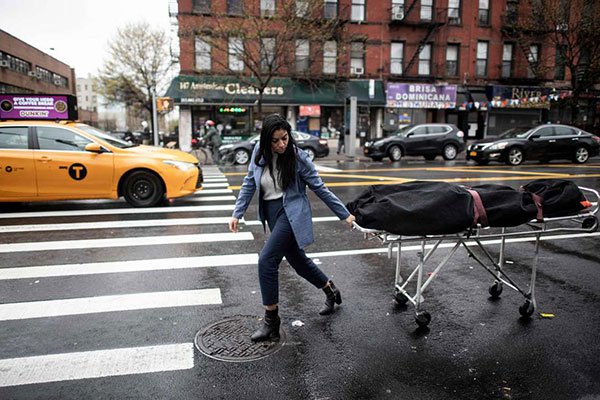 Alisha Narvaez, manager at International Funeral & Cremation Services transports a body to the funeral home on April 24, 2020 in the Harlem neighbourhood of New York City. Her funeral home tries not to turn anyone away, even if it means being under stress. PHOTO | JOHANNES EISELE | AFP

New York funeral home accepts bodies while others are full

At a New York funeral home, the undertakers can’t bear to disappoint grieving families so they try to accept all coronavirus victims even if it means they are overwhelmed.

The number of daily Covid-19 deaths has halved from the peak 799 that New York recorded on April 9, but the phone at International Funeral & Cremation Services, a female-run business in Harlem, is still ringing off the hook.

“They’re desperate, they’re like, ‘Hey, they’re going to send my loved one to Potter’s Field, the hospitals can’t hold their body anymore. Can you help? Can you help?'” said funeral director Nicole Warring, one of four women who run the parlour.

“And it is so hard to say, give me a call back in two days, so that just breaks my heart,” she told AFP.

They have been inundated with Covid-19 victims since New York became the epicentre of America’s outbreak last month.

For many families in the state, where more than 20,000 people are thought to have died from the virus, finding a funeral home able to accept their relative is a challenge.

“We had people from all over the boroughs calling because a lot of funeral homes are filled to capacity. They’re not even taking any more calls,” said Warring.

Manager Alisha Narvaez also hates adding to the pain of the recently bereaved so endeavours to accept every body, meaning the staff are working day and night.

“It’s frustrating for me to not be able to service them the way I’d like. So the hardest part is turning families down, which I try not to do,” said Narvaez.

One day last week AFP watched the undertakers bring two bodies to the funeral home in the back of a nondescript minivan.

Often they have driven to one of several white refrigerated trucks strewn across the city in recent weeks to collect the dead.

“Some of the trailers, the bodies (are) on the floors,” said Warring. “I don’t want to step on anyone – it’s just an overflow of bodies and it’s traumatising.”

Narvaez, wearing heels, and staff member Lily Sage Weinrieb transported the bodies, which were in bags marked “Covid-19,” into the premises on a stretcher.

Inside, the team prepares the bodies, completes administrative procedures and performs ceremonies in a special room where only ten people are permitted because of social distancing restrictions.

The bodies are then cremated at another site. When it’s a Covid-19 case relatives rarely attend.

“People are in quarantine and don’t come for services. So it’ll just be us — the director with the loved one at the cemetery. And so we’ll record it and send it to (friends and family). It’s tough,” said Narvaez.

Narvaez, in her 30s, has been working seven days a week throughout the crisis but doesn’t envisage being able to get some rest anytime soon.

“We have a backlog. So for us it will be a bit chaotic still for another two months maybe.

“I just hope it does slow down a little bit because I really need a break. I need a vacation after this,” she said.

New York funeral home accepts bodies while others are full Reviewed by samrack on April 30, 2020 .

Alisha Narvaez, manager at International Funeral & Cremation Services transports a body to the funeral home on April 24, 2020 in the Harlem neighbourhood of New York City. Her funeral home tries not to turn anyone away, even if it means being under stress. PHOTO | JOHANNES EISELE | AFP  New York funeral home accepts