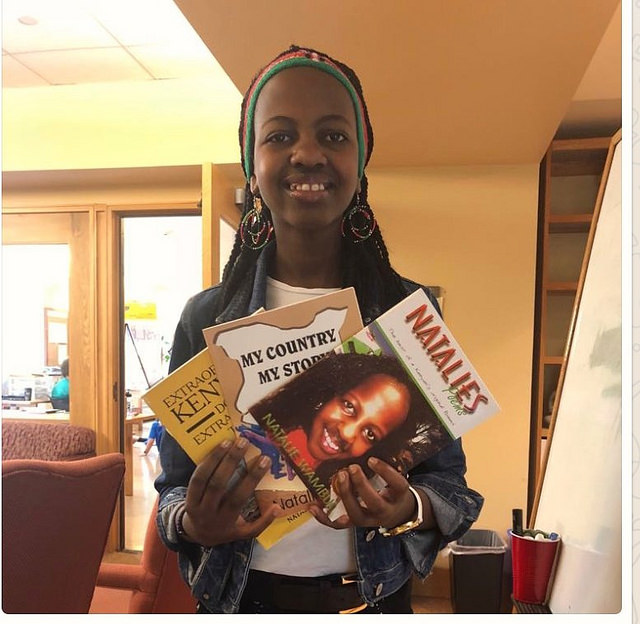 Natalie Wambui and her mother tour Belmont,Massachusetts.Over 100 children ages between 7 and 12 were in attendance where Natalie Wambui made a couple of  presentations and had an opportunity to connect with the children and later sell some of her book

BASEC is a community where children in Belmont learn, play, and grow

Natalie Wambui is a young Kenyan writer. She is 10 years old and has written 3 books.
She began writing after going through a heart surgery at the age of five.
She would write short poems of prayers and thanksgiving.
Her writing passion grew and when she was eight her first book Natalies Poems was published.
The book made people interested to know more about her.
She was featured in the Kenyan media and the whole experience made her grow as a writer.
At the age of nine, her second book which is short stories; My Country, My Story Volume 1 was published.
It had afew stories of Kenyans who were empowering their communities. The book generated support from Kenyans and made her get invited to the Statehouse by first lady. She kept on writing and thus year (2019) in April, her 3rd book was launched.
It’s called Extraordinary Kenyans Doing Extra Ordinary Things. It’s a volume 2 of her second book and it touches of forty great Kenyans who are doing great things.
Through her writing she has won 2 international awards, the first one was from Read Africa Global for best creative story of the year 2017.
And the second award was from American Friends Service Committee for using her writing talent to promote peace during the election period of Kenya in 2017. She has changed many lives and especially young children and taught them to dream big while they are still young.