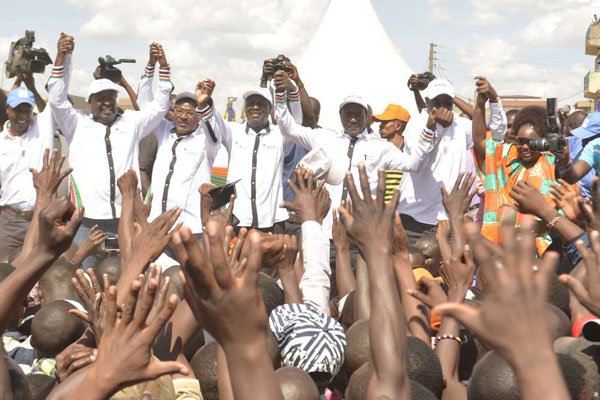 Nasa leaders display their unity at Masinde Muliro Stadium in Mathare on March 24, 2017. The Nasa co-principals may not need to go for a retreat to agree on the coalition’s presidential candidate. PHOTO | NATION MEDIA GROUP

The National Super Alliance co-principals may not need to go for a retreat to agree on the coalition’s presidential candidate, it emerged on Wednesday.

Nasa coordinating committee members hinted that the four leaders were edging closer to a decision as they announced that on Thursday, they will officially receive Bomet Governor Isaac Ruto and his Chama Cha Mashinani into their fold.

Committee co-chairmen James Orengo, Sakwa Bunyasi and Johnson Muthama said it was no longer necessary for the four principals to go on a retreat to deliberate and agree on a presidential candidate, with a number of them insisting that the matter could be dealt with in Nairobi.

Asked whether the retreat, which was scheduled for Monday to Wednesday this week, was still on, Mr Orengo responded: “A retreat must not be held at the Coast, it can be (held) anywhere.”

Mr Bunyasi tellingly added: “With or without a retreat, the deliberations between the principals are ongoing.”

The three declined to divulge details about the ongoing search for a flag bearer with Mr Muthama only stating that they were at an advanced stage.

“We have our flag bearer, very soon and soon, Kenyans will know who it is,” said the Machakos senator. Other sources said the decision could be taken as soon as this weekend.

“Only the Ruto matter is outstanding, they have agreed in principle on almost all other matters,” said one source.

Mr Orengo noted that the coalition agreement signed by the four Nasa leaders had a provision for the inclusion of more parties, hence the coming on board of Mr Ruto and his party. “What we only need to do is to inform the registrar of political parties on the new entrants,” he added.

Mr Ruto has however not attended any of the meetings as he was held up in Bomet coordinating Chama Cha Mashinani primaries in the South Rift.
He only left Bomet on Wednesday afternoon for Nairobi to attend Thursday’s event.

The chairmen said Mr Ruto will be received by Mr Odinga, Mr Mudavadi, Mr Musyoka and Mr Wetang’ula at the Bomas of Kenya — the same venue where the coalition was born in January.

Mr Orengo termed the event as “very significant” saying it was proof that Nasa was growing. “We are a growing coalition, we have expanded from three to five constituent parties,” he said.

Nasa to receive Ruto officially at Bomas Reviewed by samrack on April 19, 2017 .

Share thisFacebookTwitterPinterestEmailWhatsAppNasa leaders display their unity at Masinde Muliro Stadium in Mathare on March 24, 2017. The Nasa co-principals may not need to go for a retreat to agree on the coalition’s presidential candidate. PHOTO | NATION MEDIA GROUP  Nasa to receive Ruto officially at Bomas The National Super Alliance co-principals may not need to