My mheshimiwa husband left us homeless in Scotland 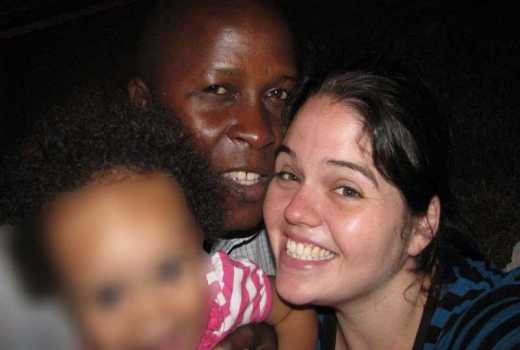 My mheshimiwa husband left us homeless in Scotland

When a young Scottish missionary met the Mayor of Kitale in 2008, it was love at first sight. But now she claims she has not seen her estranged husband for four years.

Narooma McDiarmid was 26 and planning to set up the Schecaniah Children’s Centre in Kitale town where Joshua Werunga was the Mayor.

Werunga is now the Trans-Nzoia County Assembly Speaker, and Narooma, a heartbroken, homeless single mother, is in Scotland.

Narooma had paid a courtesy call on Werunga, the politician with a bewitching toothy gap, and theirs was love at first sight beginning with their first date at the Kitale Club.

They married a year later with 120 guests attending their nuptials at the Bethel Chapel in Washington State, USA on February 7, 2009.

This week marks their ninth wedding anniversary and she needs help to launch a legal suit.

Then the nightmare began.

“Werunga walked out on me and my parents and disappeared to Kenya when I was 20 weeks pregnant. He didn’t see her (our daughter) till she was four months old. Who can’t be there for their child’s birth?” she asks, adding that she has done everything to make their marriage work, including her late mother sending Werunga  Sh304,000 to travel to the US and re-unite with the family.

“My mother took a loan of $3,000 for him to come and join us, but he never came.  He spent the money and never bothered to repay,” she says, adding that she wants him to refund the money, “which I will give to my handicapped father who’s in poor health and living with my brother.  I want assistance to also compel him to pay the nine years of support he owes me.”

Contacted by The Nairobian, Joshua Werunga does not deny the claims from his mzunguwife. His dilemma is that he has another family in Kenya. He can’t leave them to be with Narooma and their daughter in a foreign land.

Narooma now says she’s at the end of her tether from the on and off marriage in which Werunga has kept them at an arm’s length.

Since she moved to Kenya after their wedding, she has never spent a night at Werunga’s rural home in Endebess where he unsuccessfully contested the 2013 Parliamentary seat. He claimed it was unsafe as politicians have many enemies.

Werunga told her that it was safer for her to live with his sister in Lessos in Kitale town but she was suspicious of his explanations.

“I allowed him to stay at a guest house with me but we slept in separate rooms. I wanted him safe, never in my wildest of dreams did I ever imagine he could betray me at some point, says Narooma.

The couple has lived in Kitale, Eldoret and Kitengela, where, “he abandoned me in 2014, saying he could no longer afford the Sh18,000 rent as he had no money and no job. We had stayed at a rental house in Kitengela for five months where we slept on the floor. We had to leave the country,” says Narooma who laments that she loved Werunga but he, “used and abused me to date.”

Narooma now lives in a hostel for the homeless in Edinburgh, Scotland with her eight year old daughter where, “there is no laundry, cooking facilities or furniture in my house apart from the bed, which is also serves our ‘table’. I miss living in a quiet house. Joshua has never supported us, he only sent Sh1000 when we lived in Kenya in 2014. That is the only support he has ever given us in nine years. He’s never sent money in all the years, never sent his daughter a birthday or Christmas gift.”

She survives on hope and philanthropy of church members.

“My daughter is so anxious because of all the moves she can’t even settle in school,” she says.

Narooma’s mother died in 2012 from stress caused by her difficult marriage.

“The man I married neglected me and my daughter. He has provided nothing for us since I gave birth, not even when he was a mayor or after he was elected the Trans-Nzoia County Assembly Speaker,” says Narooma who claims she cannot even afford airtime to make a call.

My mheshimiwa husband left us homeless in Scotland Reviewed by samrack on February 9, 2018 .