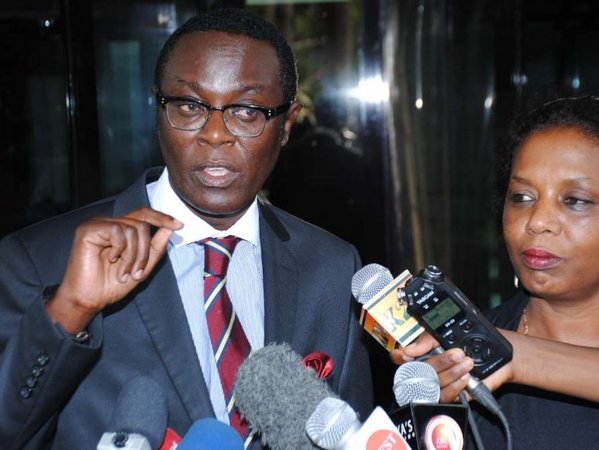 Ngunyi, who fielded reporters’ questions after hours of questioning by Ethics and Anti-Corruption Commission detectives, said that when his company, the Consulting House, was contracted to advice the Ministry of Devolution and Planning, he soon realised that the procurement processes were thick with loopholes through which unscrupulous firms could swindle the NYS out of cash.

“I was consulting for the minister. When we went and saw the manner procurement was being done, we raised the matter. We were unfortunately told we were given specific instructions. We were told your job is not to go there to fight corruption,” Ngunyi said.

Ngunyi was accompanied at the EACC by lawyer Jennifer Shamalla and was grilled for four hours and left after writing a statement.

Shamalla said Ngunyi was summoned by the anti-graft detectives to shed light on what he knows about the Sh791 million NYS fraud.

Ngunyi was summoned to record a statement over the allegations made in an affidavit filed in court by businesswoman Josephine Kabura detailing the money trail and those who handled the NYS cash.

The EACC has so far questioned former Devolution and Planning CS Waiguru, Kabura, and a number of top police officers from the Banking Fraud Investigation Unit in relation to Kabura’s affidavit that adversely mentioned several people.

The former powerful CS last week asked for police protection, claiming her life was in danger after she filed a counter-affidavit in which she named National Assembly Majority leader Aden Duale and Senator Kipchumba Murkomen as part of the web of crafty influence peddlers who visited the offices of one of her key officers and demanded tenders READ MORE