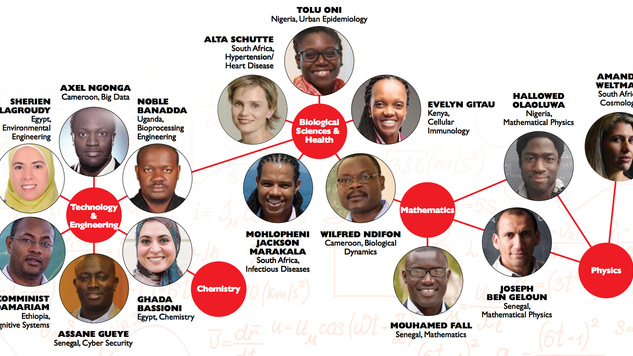 Their biographies, to the lay-man, look like something akin to the work of a superhero, and they could just save the continent.

THE first global gathering of African scientists, the “Next Einstein Forum”,  is taking place in Dakar, Senegal. With over 1,000 people from more than 100 countries in attendance, it is shaping up to be the most significant global discussion yet in harnessing Africa’s scientific talent.

Among the delegates is a small group of 15 young African “fellows” who were selected for the impact of their work and to showcase some of the incredible research that Africa’s scientists and technologists are doing.

Their biographies, to the lay-man, look like something akin to the work of a superhero. Their resumes include; research on the ability to predict biological outbreaks that are bound to happen, the use of green chemistry to solve fresh water issues, the creation of bioreactors that could save a city’s water supply, the causes of disease and immunity and predicting global behaviour through IT systems.

Others are Challenging Einstein’s theories on quantum properties, developing better therapeutic and diagnostic tools to fight Tuberculosis and other HIV-related opportunistic infections and intelligent applications that can bridge humans and large amounts of data.

But just who are they? Meet these incredibly talented scientists:

Noble’s area of research is bioprocessing engineering, specifically mathematic modelling of biological systems and interactions. The ability to predict what is bound to happen based on current biological observations before it happens is very important for prevention and control especially in countries that lack the resources to contain outbreaks. Noble led a team that has pioneered the first ever farmer-based low cost multiple purpose vehicle in Uganda and in 2015 he was honoured as a young scientist at the World Economic Forum in Dalian, China. In waste management research, Noble is ranked 35th globally and 2nd in Africa according to Google Scholar rankings

In terms of research, Ghada has been interested in a variety of sub topics within chemistry and chemistry related subjects. In her undergraduate, she dabbled in inorganic chemistry, then went into organometallic chemistry during her masters only to end up in physical chemistry and interfacial science phenomena in her postdoctoral studies in the field of construction materials and petroleum chemistry. Ghada plans to spearhead initiatives around chemical safety and the use of green chemistry. She hopes to use interdisciplinary approaches to solve societal challenges like fresh water supply.

Shrien is an Associate Professor of Environmental Engineering at Ain Shams University in Egypt and the founding director of the first Solid Waste Management Center of Excellence in the country. For her PhD studies at Ryerson University, Sherien modelled the settlement of bioreactor landfills and then built a field-scale prototype of that novel landfill in Cairo. Her new bioreactor stopped methane emissions and the leaching of wastewater into Cairo’s water supply. Sherien is currently engaged in several research grants of more than $3.5 million in the fields of solid waste management, biochemical waste treatment technologies and waste to energy.

Joseph’s area of research is mathematical physics in particular quantum properties of matter. Today, there is a large consensus among physicists, that at very small distances, much smaller than the parts of an atom, the geometry of our spacetime are no longer in the form observed around us. Thus, this predicts that Albert Einstein’s laws fail at this very tiny scale. Building models consistent with this quantum understanding using mathematical scenarios is the focus of Joseph’s research. For his “pioneering work on Renormalisation on Tensor Field Theory and the discovery of their generic asymptotic freedom’‘, he was awarded a Young Scientist Prize in Mathematical Physics 2015-2017 by the International Union of Pure and Applied Physics (Switzerland).

Evelyn’s studies focused on cellular immunology, investigating the changes in protein levels as markers of severe disease where she employed proteomic tools to identify protein differences in plasma and cerebrospinal fluid of children with cerebral malaria compared to children presenting with other encephalopathies (a disease in which the functioning of the brain is affected by some agent or condition). It is estimated that around 40-50% of infectious diseases remain undiagnosed in sub-Saharan hospitals mainly due to limitations of classical techniques such as microbiological culture of pathogens from patient samples, as well as the high cost of more sensitive molecular based techniques. This has a devastating impact on childhood survival, but also is a contributory factor to the over prescription of antibiotics with severe long-term consequences for the health of the population as a whole. Knowing the exact cause of disease may potentially improve decisions on therapy, reduce mortality and sequelae and lead to specific protective therapies. To do this, Evelyn believes that Africa needs to embrace new technologies to improve on how common diseases are diagnosed. With this in mind, Evelyn has played a key role in helping establish the technical platform necessary to undertake internationally competitive research on disease pathogenesis and immunity, in Kilifi Kenya.

Assane’s current research focuses on investigating a science-based approach to the security and the performance of large-scale information and communications systems. His aim is to establish theories, develop models, and propose algorithms that can be used to design and operate information and communication systems for which (a) global behaviour can be predicted, (b) the risks of catastrophic events can be managed and mitigated, and (c) the effectiveness of control actions can be measured. Assane also dreams of implementing the Enabling African Universities (EAU) project. The goal of EAU is to “develop a collaborative platform that enables knowledge exchange and technology transfer between African researchers and researchers across the world.”

Jackson’s research is focused on the development of better therapeutic and diagnostic tools to fight Tuberculosis and other HIV-related opportunistic infections. He has published in leading peer-reviewed journals and has presented his work at international conferences. In 2014, Jackson was part of the first-ever Commonwealth Science Conference that was aimed at using science to tackle problems in Commonwealth countries. He was honoured as a Young Scientist at the 2015 World Economic Forum New Champions Meeting in China. He was also invited to the 2015 Commonwealth Day reception in London where he met Her Majesty Queen Elizabeth II and The Duke of Edinburgh.

The central focus of Wilfred’s research is the immune system – an extremely complex system of cells, tissues, and organs that protects us against diseases.  Based on its job description, the immune system is mostly beneficial, but it sometimes malfunctions and becomes detrimental. Understanding the mechanisms that govern the functioning of the immune system is key to enhancing its ability to protect us against diseases (e.g. by designing vaccines), and bringing it back in line when it malfunctions. His research seeks to advance this understanding by applying mathematical thinking to the design of experiments that probe specific aspects of the immune system, and also to the interpretation of data. Applications being pursued include the design of an improved vaccine for malaria, and the development of technologies for predicting immunological predisposition to specific diseases so that they can be prevented before symptoms appear.

Axel’s main area of research is semantic web technologies, which aim to facilitate the development of intelligent data driven approaches to support humans as they perform complex tasks as diverse as learning new subjects, analysing large volumes of data or even surgery. His vision is to develop intelligent applications that will bridge humans and large amounts of data. The resulting techniques support the development of intuitive information systems for bio medicine, agriculture and education that can provide contextually relevant information at low cost, thus fostering an equal opportunity data landscape for Africa.

Hallowed is the youngest person to be awarded a PhD in Mathematics in Africa.  His research focuses on Functional Analysis, with a focus on Fixed Point Theory which has its applications in optimisation of allocations of resources such as network, power, workforce and Government Budget. Comprehensive optimisation schemes have tremendous impact on transportation network (traffic control, construction of routes to decongest heavy traffic), services offered by hospitals, industrial productivity and national budgets taking into account various economic, financial and social constraints.

Tolu is working on establishing the Research Initiative for Cities Health and Equity (RICHE), an interdisciplinary research programme for urban health research in Africa. Her research investigates urbanisation and health and population health transition and aims to contribute significantly to existing knowledge on the changing patterns of disease and implications for health and wellbeing of the population in the context of urbanisation. In particular, her work explores the interaction between chronic infectious and non-infectious diseases, and the impact of the physical and socioeconomic environment on the health profile of populations living in unplanned urban settings.

As part of the Hypertension in Africa Research Team (HART), Alta has made numerous scientific discoveries explaining the significantly increased risk of Africans to develop heart disease. She, however, has also sounded the alarm that hypertension in Africa will not be controlled by medication due to challenges in health systems. Alta dreams of spearheading alternative “treatment”, with prevention starting from younger ages.

Kommy’s education and research career in development is focused on creating innovative solutions that impact lives.  He is developing evidence-based solutions that aim to transform education in Africa by individualising its delivery to each child. Success in education will create future African scientists and create citizens that can compete and position the continent on a global level.

Amanda’s love of solving problems has led her to the playground of the universe, theoretical physics. She is most well-known for proposing the Chameleon field – a particle that could be responsible for causing the observed accelerated expansion of the universe while also causing interesting and unexpected local and solar system physics effects that could be observed in purpose built experiments. Her work has created new research subfields in cosmology and experimental physics. Her current research focus is on explaining and observing the two greatest unknown components of our universe, Dark Energy and Dark Matter. She is also trying to understand the nature of time, and whether the universe had a beginning and how it will end.

Meet 15 of Africa’s most brilliant young scientists – one of them could be the next Einstein Reviewed by samrack on March 9, 2016 .

Meet 15 of Africa’s most brilliant young scientists – one of them could be the next Einstein Their biographies, to the lay-man, look like something akin to the work of a superhero, and they could just save the continent. THE first global gathering of African scientists, the “Next Einstein Forum”,  is taking place in Dakar, Senegal. With over