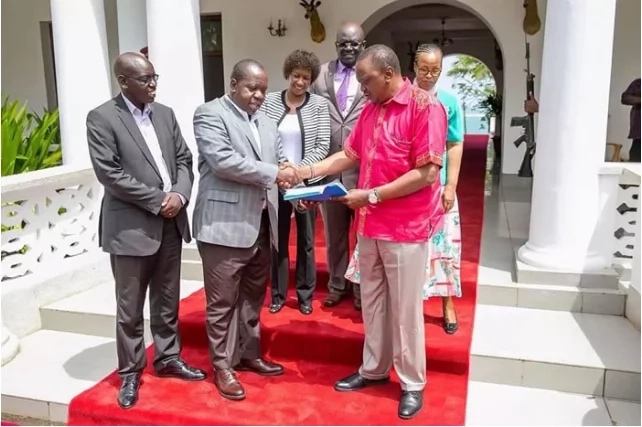 NASA’s plans to safeguard their votes has been declared illegal – CS Matiagi announced that anyone unauthorized found at the polling station will be dealt with thoroughly and within the full extent of the law – NASA intended on having 5 agents per polling station across the country to ensure no rigging takes place – Only one agent is allowed despite the opposition brigade seeking KSh 410 million to fund their adopt a polling station cause The National Super Alliance’s adopt a polling station plan to safeguard their votes from being stolen on August 8 has been declared illegal. Acting Interior Cabinet Secretary Fred Matiangi ruled out the plans, saying the government will not allow any unauthorized persons near a polling station on the material day. “Anyone not accredited by the Independent Electoral and Boundaries Commission will bot be allowed at the polling stations on August 8. The government will act firmly and will not allow anyone to cause chaos or break the law. Nobody is beyond the law,” said Matiangi on Friday, July 21.

According to Citizen TV, Matiangi also directed the poll body to furnish him with the names of people supposed to be at the polling station, noting that the government is mandated to facilitate the IEBC to conduct its constitutional mandate in an objective and honest way. “There is need to be objective, honest and firm according to the law. Kenyans depend on the security forces,” concluded Matiangi. For months now, the NASA brigade has been touting the adopt a polling station plan to rule out any chances of being rigged out.

The opposition alliance was seeking KSh 410 million to fund 5 agents per polling station across the country, even as IEBC boss Wafula Chebukati re-iterated that the plan was unlawful. The law only allows one agent per candidate per station.

Matiangi declares Raila’s move to safeguard his votes illegal 16 days to the poll Reviewed by samrack on July 22, 2017 .