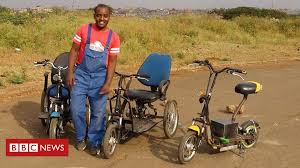 Warnae designed and makes the Liccel chair himself. Central to the design is the battery – it needs to be reliable enough to keep the chair powered for up to 70 kilometres (43.5 miles). He finds what he’s looking for in the narrow back alleys of Ngara in Nairobi.

Here, he buys old laptop batteries. “All the batteries that are here are from dead laptops or maybe the batteries are dead themselves,” says Warnae “Then from here I go to my workshop and disassemble them and get the correct, the good cells from them, and those are the cells that I use to make my vehicles.” Back at the workshop, Warnae groups the batteries together according to voltage and viability.

He can set the distance a chair will cover on a single charge by varying the number of cells he installs in one battery. Wamae invented the Liccel wheelchair especially for the Kenyan market.

“The reason why I designed and started building the wheelchairs is because I saw people with disabilities had a lot of issues moving from point A to point B.

And the challenges they had included the Matatus (public service buses) failing to carry them, the roads that are in Kenya were not good for the imported wheelchairs to cover,” he explains. “I couldn’t design a chair that was using fuel, because I am a good champion of green energy, so I had to consider how I could use recycled material that included the batteries.”

Apart from the electric motors imported from China, everything else is made from used or recycled parts. As well as old batteries, Warnae reuses metal parts he buys from a second-hand motorbike dealer. Even the seats are sourced from used office chairs A Liccel wheel chair has transformed Maryann Wanjiru’s life.

She’s been paralysed since she was eight years-old after a relative brutally beat her and damaged her spine. Her disability meant she couldn’t go to school, and for 45 years, she was forced to crawl on her hands and knees or use a manual wheelchair to get around.

“It used to make me weak because I would try to ride it till my hands and chest get tired. But when I was given this electric tricycle, it was way better because this one you don’t use energy, you only press a button,” says Wanjiru.

On a single charge, Wanjiru can use her wheelchair for at least three days. It costs Lincoln about $250 to make one of these and he sells them for about $300.

Lincoln Wamae Inventor from Kenya 🇰🇪 builds custom wheelchairs from recycled laptop batteries that last up to 3 days. Reviewed by samrack on February 15, 2020 .

Share thisFacebookTwitterPinterestEmailWhatsAppLincoln Wamae Inventor from Kenya builds custom wheelchairs from recycled laptop batteries that last up to 3 days He’s off in a cloud of dust. Lincoln Wamae is testing one of his electric wheelchairs.   He knows how to do all the best tricks on three wheels – but this is also a routine stress test