The Returning Officer for the Kibra MNA By election 2019 declared ODM’s Okoth Bernard Otieno as the validly elected MNA for Kibra Constituency after garnering 24,636 votes. Jubilee candidate MacDonald Mariga was second with 11,280

Vote counting has kicked off in Kibra constituency after a day of voting that was marred by chaos in some polling stations.

The polling stations were closed by 6pm.

Congratulations to Kibra MP Elect @ImranOkoth & Kibra people for voting in a true son of Kibra. Thank you for honouring the handshake. Walikucheka lakini #kwagroundvitunidifferent. Long live the #Handshake ; forward, onward to #BBI#volumeikosawa?#KibraDecides

“We have won the Kibra seat, as per our tally. We are only waiting for the official declaration of results and handing over of certificate to our candidate,” Mr Sifuna said. 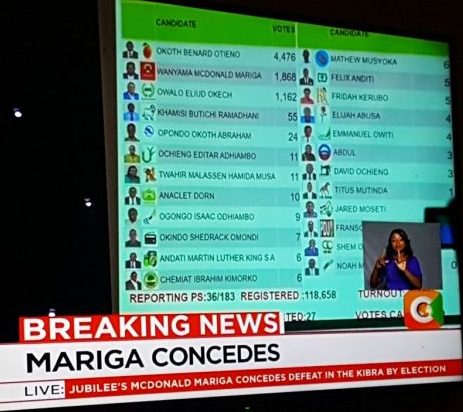 In a video clip, Mr Mariga called Mr Okoth to congratulate him for his victory.

He said he was happy that the contest was carried out peacefully and that they will continue being friends.

Mr Mariga conceded defeat when the Independent Electoral and Boundaries Commission (IEBC) figures from 40 out of 183 polling stations showed he was trailing Mr Okoth who had garnered 4,988 votes with 2,106.

Security was beefed up around various parts of Kibra as constituents cast ballots.

Officers from the GSU and the regular police were on standby manning the hotly contested seat in an exercise that was marred by claims of voter bribery and intimidation.

US e-commerce giant Amazon to set up a data centre in Nairobi; facility to make it easy and cost effective to share information housed in Kenya.

US e-commerce giant Amazon to set up a data centre in Nairobi; facility to make it easy and cost effective to share information housed in Kenya.