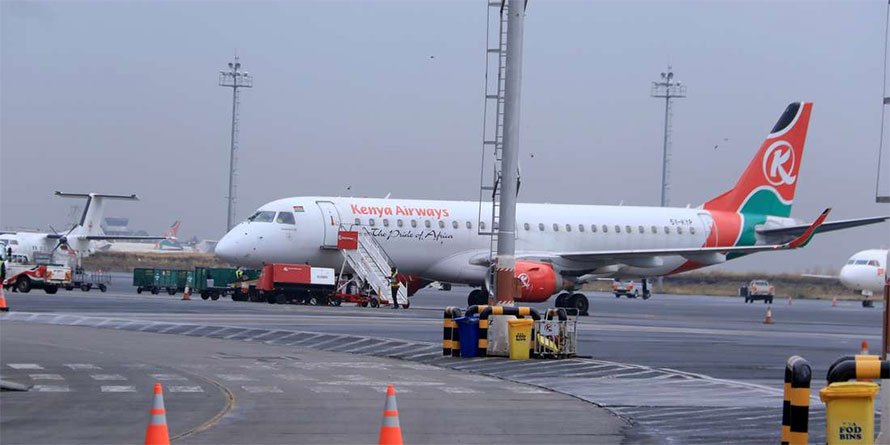 Kenya Airways pilots will reject planes from the national carrier following a maintenance row that looks set to cause flight cancellations and delays.

Though their lobby– Kenya Airline Pilots Association (Kalpa)—they warned Wednesday that they will not operate aircraft that KQ has released through a maintenance dispatch known as ‘Crew Concept’.

Under the crew concept, pilots are expected to undertake some safety checks that are ordinarily done by engineers.

The pilots lobby now reckons that it will ground flights whose maintenance checks have not been signed off by engineers.

The move looks set to deepen flight cancellations that have recently been attributed to pilots shortage at the national carrier.

Kenya Airways sank into steep losses in 2014, causing some of its engineers and pilots to seek greener pastures, especially among deep-pocketed Gulf carriers.

“By copy of this letter, with immediate effect, Kalpa members will no longer comply with the crew concept procedure,” Murithi Nyagah, Kalpa secretary-general said in a letter to Kenya Airways.

“Kalpa members will only accept aircraft whose sections of the technical-log page that require to be filled are completed accordingly by the dispatching engineer, as prescribed in the law,” said the letter seen by the Business Daily.

On Wednesday, the aviation regulator—Kenya Civil Aviation Authority (KCAA)—summoned Kenya Airways and the pilots for a meeting to settle the dispute.

KCAA director-general Gilbert Kibe did not respond to requests for comment on this story.

Among the safety checks that Kalpa accuses KQ of breaching is the release of planes without engineers approving the flight security checklist.

The lobby argues that pilots have been filling in receipt details of fuelling operations carried out by non-maintenance personnel, adding that the practice is exposing the pilots to litigation.

“Kalpa is therefore left with no alternative but to insist on the rightful procedure to be undertaken as per the law and regulations,” the pilots said in the letter.

Kenya Airways in September said it would be forced to cancel more flights in the weeks ahead due to the pilots shortage.

Kenya Airways has 435 pilots, against a fleet requirement of 497.

The carrier has been locked in a row with Kalpa over plans to recruit 20 new pilots for its Boeing 737 jets on two-year contracts, allowing existing pilots to take time off.

Frequent cancellations of the airline’s cargo freighter has also led to cargo customers opting out.

Kalpa, the bulk of whose membership is drawn from Kenya Airways, blamed the carrier for not recruiting enough pilots on time.

Kenya Airways reported a first-half pretax loss of Sh8.56 billion, more than double that seen in the same period of 2018.

The airline flies to 53 destinations around the world from its hub in Nairobi, 43 of which are in Africa. The destinations stood at 47 in 2010.

The airline faces stiff competition, not just from major players like Emirates and Turkish Airlines, but from African carriers as well.

Parliament plans to nationalise the loss-making airline, which is struggling under a mountain of debt and taxes and has also had three changes of chief executives in the past five years.

The Kenyan carrier, which is 48.9 percent government-owned and 7.8 percent held by Air France-KLM, was once held up as a model of successful privatisation after its shares were floated at the Nairobi Securities Exchange.

Share thisFacebookTwitterPinterestEmailWhatsAppKQ pilots reject planes in maintenance fight Kenya Airways pilots will reject planes from the national carrier following a maintenance row that looks set to cause flight cancellations and delays. Though their lobby– Kenya Airline Pilots Association (Kalpa)—they warned Wednesday that they will not operate aircraft that KQ has released through a maintenance dispatch