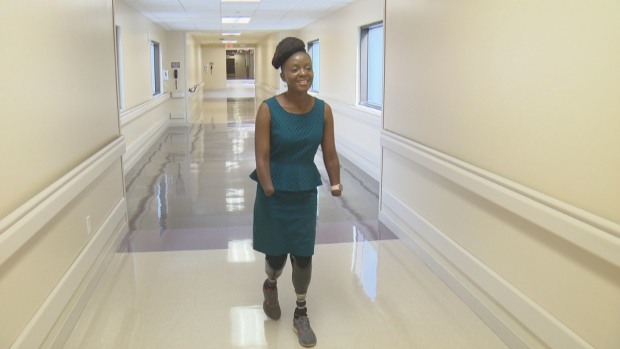 A mother from Aurora is a quadruple amputee. She lost her hands and her legs when pneumonia led to septic shock.

But Victoria Mugo is grateful to be alive.

Each year, more than 250,000 Americans die as a result of sepsis. The key is catching and treating it early.

Victoria is a celebrity of sorts at The Medical Center of Aurora (TMCA). The medical staff considers her a miracle.

For months, Victoria was in the ICU there. She lost both hands and both legs. Yet, on Monday, she came back to say “Thanks.”

“You don’t get any sicker than Victoria was,” explained Carolyn Golas, Sepsis Coordinator at TMCA.

On Jan. 9, Victoria was rushed to the ER with pneumonia. Within hours she was in septic shock, a toxic response to the infection.

“She had about an 80% chance that she would not survive,” said Golas.

Victoria was put in a coma and on life support. Blood flow to her extremities slowed down. When the 38-year-old mother woke up, her hands and legs were dying.

“I could just snap them and not feel anything,” she said.

All four were amputated.

“I am not sitting in a corner feeling sorry for myself because I don’t have my arms or my legs, I’m walking now (on prosthetic legs),” Victoria said.

Victoria’s faith in God is her strength.

“He got me through it. He is the one who has brought me this far,” she said.

She said she has what matters most, her son, Alexander, and the rest of her loving family.

Her smile is a smile of gratitude. Her fighting spirit is fueled by faith.

Facts about sepsis from TMCA:

Share thisFacebookTwitterPinterestEmailWhatsAppKenyan Victoria Mugo in Aurora, Denver Loses Hands, Legs Due To Septic Shock [VIDEO] A mother from Aurora is a quadruple amputee. She lost her hands and her legs when pneumonia led to septic shock. But Victoria Mugo is grateful to be alive. Each year, more than 250,000 Americans die as a result of