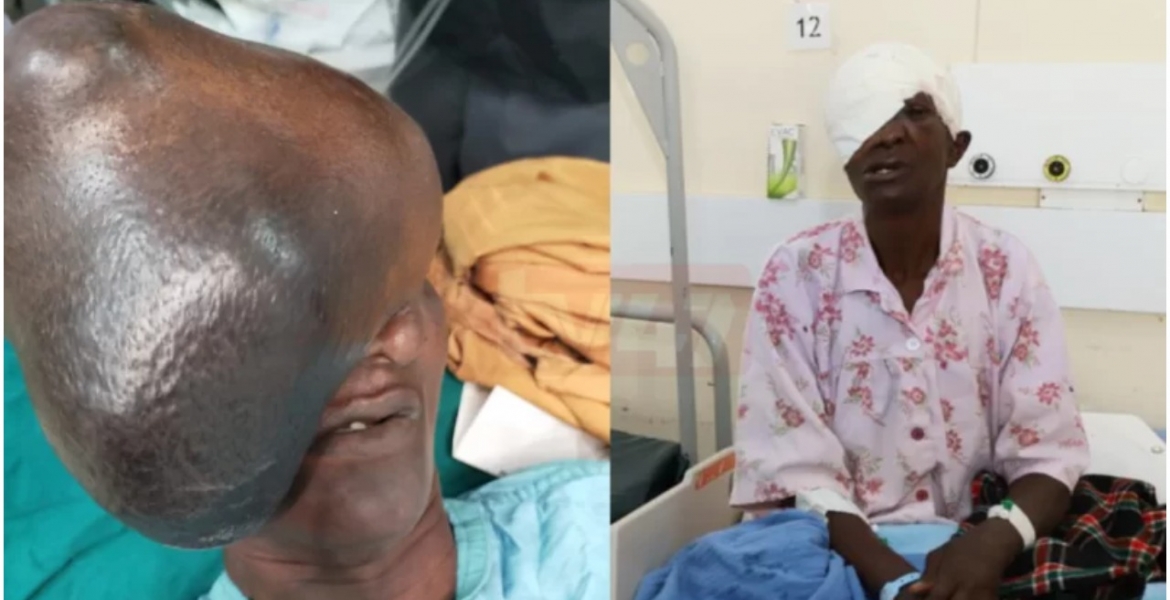 A team of doctors at Moi Teaching and Referral Hospital (MTRH) in Eldoret has successfully removed a three-kilogram cystic growth on an elderly woman’s face.

68-year-old Beatrice Nanjala Makokha, a resident of Kimilili, Bungoma County, had lived with the growth for 21 years. It had occupied one side of her face including the eye, frontal bone, ethmoid and frontal sinus, making it hard for her to breathe.

The hospital’s CEO Dr. Wilson Aruasa said: “Beatrice is doing well and she is upbeat. I have talked to her and she is so grateful to the hospital and all the support she has received.”

Beatrice says the growth began as a mild pain on the right side of her head but she thought it was nothing serious and took some painkillers. But with time, the pain aggravated and degenerated into growth.

“It felt like my eye was being stabbed with a knife and I just couldn’t stop rubbing it. The rubbing would slowly get intense and vigorous until my eye turned red,” she told The Star in an interview.

“I was diagnosed with a rare growth. I stayed in the hospital for eight months but there was no improvement so I was told to go home,” she added.

Beatrice, a mother of 14 (eight of whom have died), underwent surgery after well-wishers raised funds for her treatment, with former Nairobi Governor Mike Sonko contributing Sh300,000. MTRH said it conducted the operation for Sh550,000.

“MTRH will treat Beatrice as a Corporate Social Responsibility client under the Universal Health Coverage,” the hospital said in a statement.

Kenyan Doctors Remove 3kg Growth on ElderlyWoman’s Face, Ending 21 Years of Agony A team of doctors at Moi Teaching and Referral Hospital (MTRH) in Eldoret has successfully removed a three-kilogram cystic growth on an elderly woman’s face. 68-year-old Beatrice Nanjala Makokha, a resident of Kimilili, Bungoma County, had lived with the growth for 21