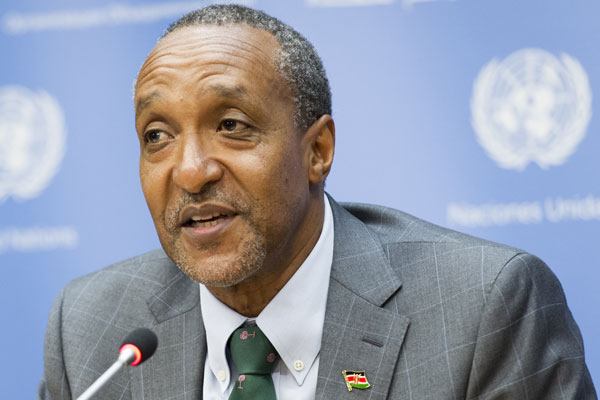 NEW YORK/UNITED NATIONS
Kenya United Nations Ambassador Macharia Kamau was appointed on Friday as one of two UN special envoys on El Niño and climate.
UN Secretary-General Ban Ki-moon also named former president of Ireland Mary Robinson to the newly created post.
Ambassador Kamau “has had a long and distinguished career in the service of the United Nations,” the UN spokesperson’s office said in announcing the appointments.
The Kenyan diplomat is widely respected in international circles as an articulate advocate for his country and for the UN system.
He serves as chair of the UN Peacebuilding Commission and recently played a leading role in drafting the Sustainable Development Goals.
In a message sent to the Nation, Ambassador Kamau cited his work in formulating the new set of development goals as having heightened his “global profile.”
He said he intends to use that prominence to “highlight challenges and responses to climate change and El Niño.”

GREAT URGENCY
Mr Ban’s spokesperson said “these appointments come at a time of great urgency. Drought and flooding associated with El Niño have created massive needs across the world, especially in the four worst affected regions of East Africa, Southern Africa, Central America and the Pacific.”
One million children in Eastern and Southern Africa alone are severely malnourished, the spokesperson noted.
“The United Nations Special Envoys will provide the leadership required to tackle these challenges, raising the profile and sounding the alarm,” Secretary-General Ban said. “It is vital that we scale up our humanitarian response urgently.”
Ambassador Kamau told the Nation that he and Ms Robinson will decide after next week’s World Humanitarian Summit in Istanbul “how we wish to proceed and where our engagement will be most impactful.”