Kenya to Spend U.S.$4.6 Billion of Revenue On Paying Debt 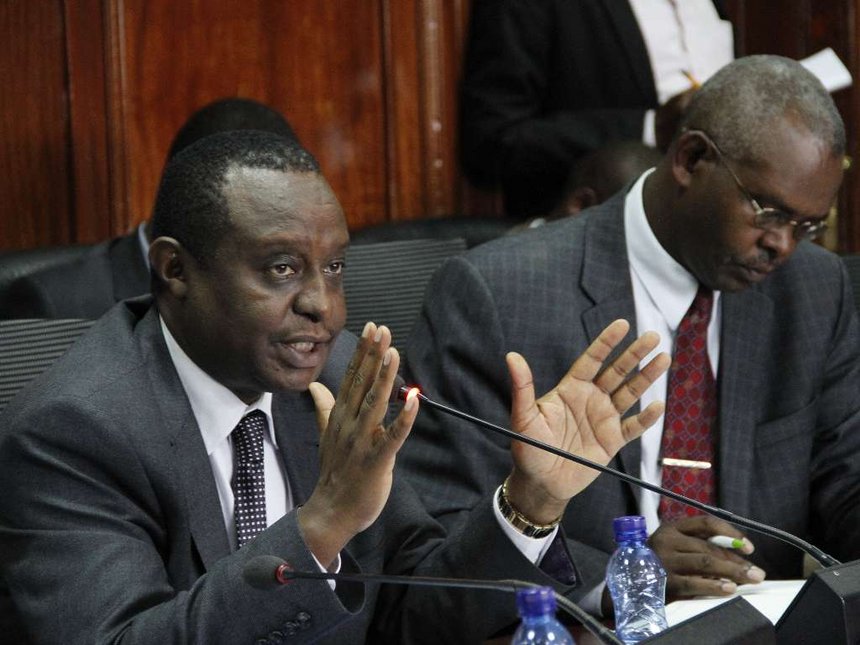 Kenya to Spend U.S.$4.6 Billion of Revenue On Paying Debt

Kenya proposes to spend $4.66 billion on public debt repayments in the financial year starting June, effectively locking 20 per cent of budget expenditure into debt repayment and putting the country’s hopes of a lower inflation and interest rate regime in doubt.

At the start of the current financial year, Kenya’s debt was the highest in the region at $31.6 billion, with more than 60 per cent of it being domestic, while Tanzania’s national debt stock peaked at $19.14 billion, with 80 per cent of this in external debt.

Uganda’s public debt stood at $7.6 billion, with 60 per cent of it being external, while Rwanda’s was at $1.85 billion, of which 76 per cent was foreign debt.

Thomas Kinyonda, an economist said the country will struggle to bring down interest rates, inflation and this puts at risk the country’s ratings.

“We are staring at undesirable fiscal consequences. We have seen the interest rates remain high, raising the cost of money for businesses. As it is, our debt is growing faster than tax revenues. We can either grow the tax base or accumulate more debt. I feel the government will prefer widening the tax bracket,” Mr Kinyonda said.

Kenya’s debt expense estimate is contained in the budget summary for the 2016/17 financial year submitted to parliament by the National Treasury Cabinet Secretary Henry Rotich.

In the estimates, Kenya is proposing that out of its $2.15 billion going to principal repayment, $1.72 billion or 79 per cent will be spent on domestic debt with the remainder settling foreign debt.

Of the $2.51 billion marked for interest, $1.97 billion will go towards settling the domestic debt and the rest for foreign debt.

John Mutua, the public finance programme officer at the Institute of Economic Affairs, expressed concern that the payment of interest on existing debt exceeds the repayment of principal by 16.2 per cent.

“The government should curb its appetite for borrowing and look for ways of repaying the rising public debt,” Mr Mutua said at a briefing on budget estimates.

Kenya spent close to 40.9 per cent of its tax revenues to settle its debts in the first nine months of the 2015/16 financial year. Data from the Treasury shows that the country spent $3.17 billion in the year to March, to service its debts against tax collections of $7.75 billion over a similar period.

On the other hand, the country’s tax revenues have only grown by 40 per cent over the same period, with the Kenya Revenue Authority currently collecting $10.7 billion up from $7.95 billion in June 2013.

In its Budget Policy Statement released in February, Treasury revised its domestic borrowing target downwards to $1.7 billion from $2.2 billion with a preference for foreign borrowing.

Mr Rotich admits that current conditions in the international market aren’t conducive for the country. “External borrowing remains the preferred option for the government to source for financing on concessional terms. However, the borrowing terms have hardened,” he said.

Kenya is proposing to attain a 60:40 ratio of external and domestic borrowing to finance its 2016/17 budget deficit, with a Treasury bonds to Treasury bills ratio of 76:24.

“We have taken this decision to account for both cost and risk. We recommend the issuance of medium to long term issuances to ensure the maturity structure of the existing portfolio is lengthened to minimise refinancing risks,” Mr Rotich said.

The only risk Kenya runs with increased foreign borrowing is that it is difficult to reschedule debts once due, while foreign currency fluctuation exposures makes interest repayments costly.

As at June last year, Kenya’s total debt to be repaid within one year stood at 9.2 per cent of GDP as compared with6.9 per cent of GDP five years ago, a source of worry for the Treasury.

Mr Kinyonda also said that the current debt-to-GDP ratio is the highest in a decade, which has seen the annual interest payment as a share of GDP increase from 2 per cent to the current 3.5 per cent annually.

Mark Bohlund, an economist with Bloomberg-Africa and Middle East, said that Kenya has one of the highest public debt levels among large sub-Saharan African economies.

“This is partly a result of it having neither the commodity revenue sources of Nigeria and Angola nor the budget support from donor countries enjoyed by neighbouring Tanzania and Uganda,” Mr Bohlund said, adding that Kenya’s intention to reduce its budget deficit may be undone by the ongoing devolution and elections in 2017.

“The 2016/17 financial year budget policy statement included a reduction in the fiscal deficit after a period of expanded spending, mainly for infrastructure. Treasury is targeting a budget deficit of 9.3 per cent of GDP in the new financial year,” Mr Bohlund said

Treasury CS Henry Rotich with PS Kamau Thugge Kenya to Spend U.S.$4.6 Billion of Revenue On Paying Debt By Allan Olingo Kenya proposes to spend $4.66 billion on public debt repayments in the financial year starting June, effectively locking 20 per cent of budget expenditure into debt repayment and putting the country’s hopes of a