Kenya gets Sh38bn to step-up war on HIV, malaria 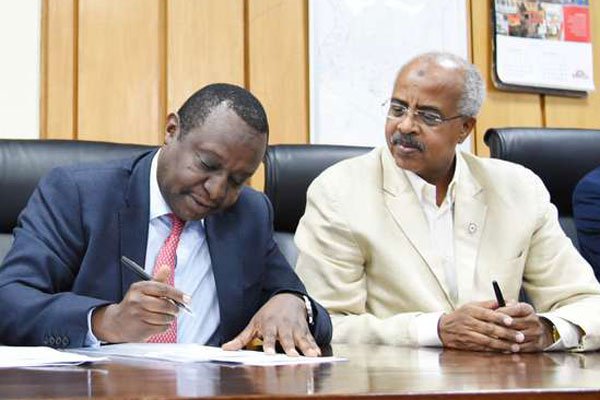 Kenya gets Sh38bn to step-up war on HIV, malaria

Kenya has finally received a cash grant of Sh38 billion from the Global Fund to finance malaria, HIV and tuberculosis programmes in the country.

Release of the three-year grant contained in six agreements meant for 2018-2021 was signed last week following an approval in August and will see the Treasury and two non-governmental organisations – African Medical Research Foundation (Amref) and Kenya Red Cross Society – receive the funds.

With the grant of Sh25 billion, an estimated 1.3 million Kenyans living with HIV will be able to access lifesaving anti-retroviral treatment drugs.

The country has committed an additional Sh13 billion (US$130 million) to investments in these deadly diseases.

TREATMENT
Signing the deal, National Treasury Cabinet Secretary Henry Rotich said: “We are pleased that we can all work together in the fight against diseases.
Through this investment, we will accelerate our efforts to respond to HIV, TB and malaria with the aim of ending the devastating effects of these diseases in our country.”

Three grants worth Sh26.3 billion will be handled by Treasury while the remaining three will be implemented by Amref (Sh4.6 billion) and Kenya Red Cross (Sh7.1 billion).

According to a breakdown issued by the Ministry of Health, the funding, which will be managed by two principal recipients – The National Treasury (Sh17.9 billion) and Kenya Red Cross (Sh7.1 billion) – will also be used for HIV testing services, elimination of mother-to-child HIV transmission as well as addressing barriers that affect access to services among other things.

MEDICINE
Some Sh6.7 billion has been allocated to malaria.

The largest chunk of this money, which is up to the tune of Sh5.4 billion, will be controlled by the Treasury as Amref Health Africa gets Sh1.3 billion for provision of 6.3 million doses of anti-malarial drugs known as Artemisinin Combination Therapy (ACTs), 5.8 million malaria rapid diagnostic kits and 7.9 million bed nets in malaria endemic regions.

The ministry once again allocated Sh3.3 billion to Amref Health Africa, and the Treasury got Sh3 billion.