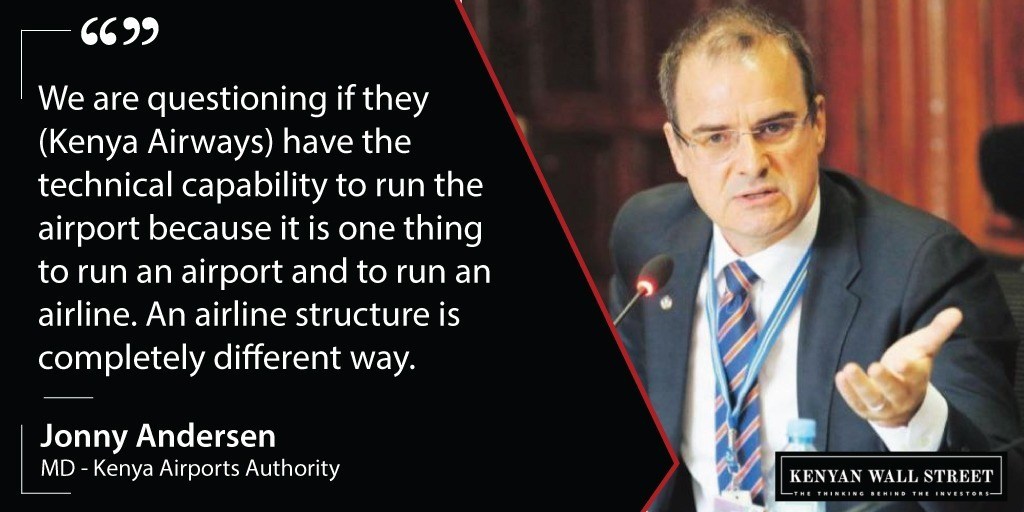 Kenya Airports Authority is skeptical about the merger between Kenya Airways and JKIA. The agency presented a report to parliamentarians raising questions on KQ’s ability to run the country’s main airport.

A due diligence report by the aviation authority revealed that Kenya Airways lacks financial, technical and legal capacity to take over operations at the Jomo Kenyatta International Airport.

Mr. Andersen also highlighted KQ’s inadequate technical capacity to run JKIA. While speaking to lawmakers, the top executive said, “….it is one thing to run an airport and another to run an airline. An airline structure is completely different.”  “We have the capacity, but the question is, do they?” the KAA boss continued.

KAA collects up to KSh12 billion in revenue from JKIA every year. This forms approximately 80 percent of the agency’s income. As a result, the organization is reluctant to give up its main revenue source to a loss-making airline.

The due diligence report also revealed that KAA Act Cap 395 prohibits airports from being acquired by private entities thereby presenting a legal challenge to the KQ-JKIA union.

However, KAA’s managing director and Chairman agree that Kenya’s aviation industry needs to change to stop the loss of business to regional airlines such as Ethiopia and Rwanda. The chair of the parliamentary committee on Transport Mr. David Pkosing added to the discussion saying, “We are losing our market directly to Ethiopia….between 2013 and 2017, (Ethiopia) were at 34 percent while we were at 47 percent, but now the picture is opposite, we are trailing them.”

Share thisFacebookTwitterPinterestEmailWhatsAppKAA officials raise concern over proposed takeover of JKIA by Kenya Airways Kenya Airports Authority is skeptical about the merger between Kenya Airways and JKIA. The agency presented a report to parliamentarians raising questions on KQ’s ability to run the country’s main airport. A due diligence report by the aviation authority revealed that Kenya