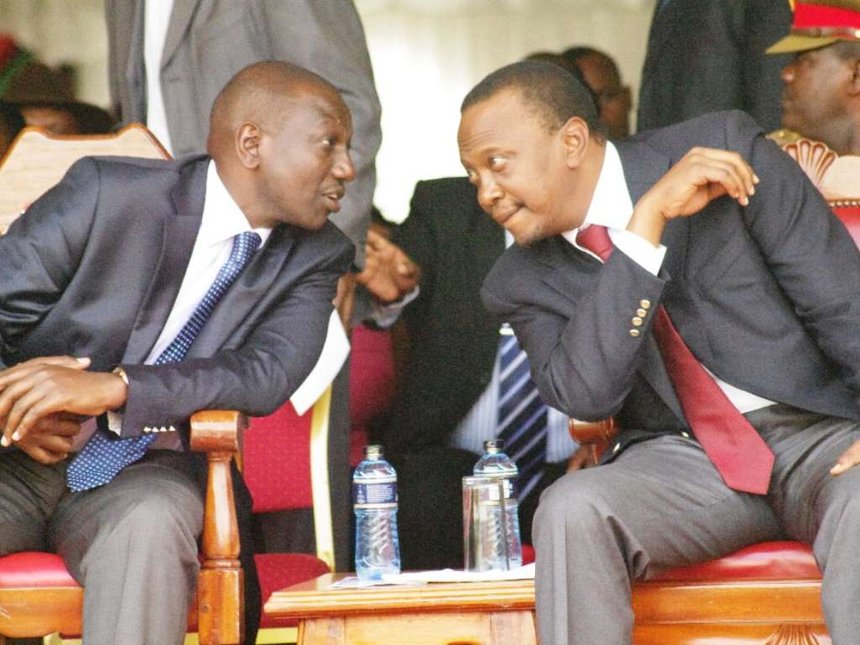 President Uhuru Kenyatta and his Deputy William Ruto during a prayer Rally on Sunday held at Ruiru stadium where thousands of poeple thronged ahead of Ruto’s trail which is starting today.

I have written in this column again and again that President Uhuru holds the key to Ruto’s bid to succeed him. Uhuru’s re-election in August will give Ruto a head start. So, the allies should stop campaigning for two elections and focus on this poll. The 2022 election can wait – the 2017 election cannot.

A few months ago, the leaderships of 11 Jubilee affiliate political parties finally agreed to dissolve their outfits and form a strong political party. During the launch of the new Jubilee Party, which had been thrice postponed, President Kenyatta would unveil its manifesto and cite two of its key pillars as fostering peace and unity; enhancing socio-economic development.

Political observers argued Deputy President William Ruto had played a key role in the formation of this party and his move was strategic. He knew his ambitions to succeed Uhuru in 2022 will face many political challenges. The formation of a strong political party would help him to significantly overcome this. This is because all members of JP will be bound to rally behind his candidature.

It should be noted in the countdown to 2013 General Election President Kenyatta, then Jubilee flagbearer, signed an MoU with Ruto. One of its key highlights stated Uhuru will run the government for 10 years and hand over to his deputy to run for another 10 years. The Constitution provides for a maximum of two terms of five year each.

We have heard at least two leaders from Central Kenya telling the DP that the region’s support will not be automatic. In 2022, we would expect you to come and sell your manifesto. More importantly, the residents would be expecting to hear how you will safeguard their interests if you lead the government.

One of the proposals is that he should pick a running mate from that region. Kiharu MP Irungu Kang’ata has been fronting for former Gatanga MP and 2013 Presidential candidate Peter Kenneth. In a rejoinder, Ruto would promise to heed that call. Kenneth has already declared he will back the DP in 2022.

And President Kenyatta has reiterated that he has confidence in the DP to succeed him.

This strategy leaves no doubt the focus of the allies is the 2022 polls. The aim is to nurture a number of small parties and enroll them to spearhead Ruto’s campaigns. But who tells you the parties will support the DP throughout?

Share thisFacebookTwitterPinterestEmailWhatsAppPresident Uhuru Kenyatta and his Deputy William Ruto during a prayer Rally on Sunday held at Ruiru stadium where thousands of poeple thronged ahead of Ruto’s trail which is starting today.  By PETER NDONGA JP has two more elections – let’s focus on August 8 2017 I have written in this column again and