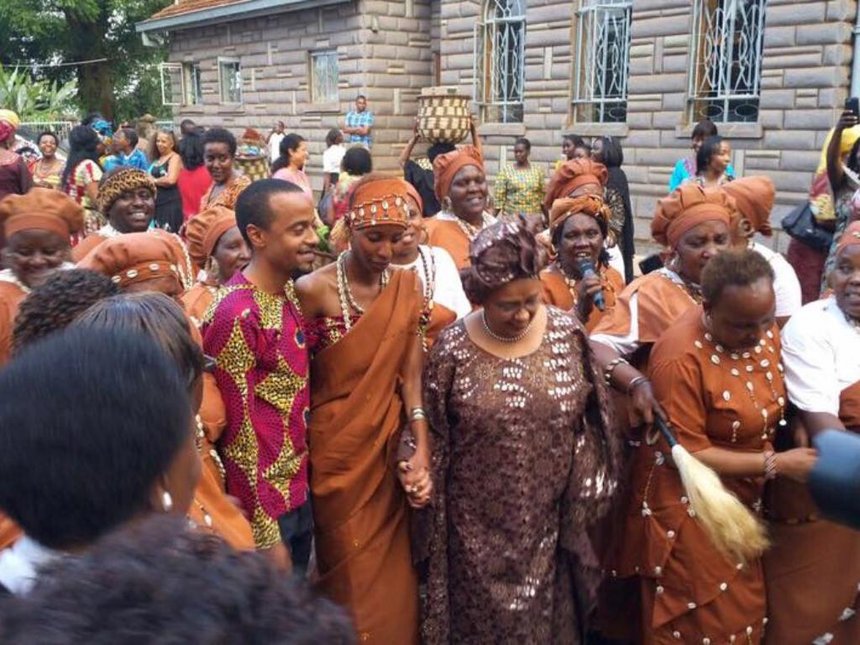 Jomo with Achola who is received by he mother in law Margaret Kenyatta.

She was received by hundreds of people including the President’s family members, friends and neighbours. The ‘itara’ ceremony is where the bride’s family visit the grooms home to see where their daughter will settle.

Itara refers to the Kikuyu traditional firewood storage in the kitchen and the ceremony is an assurance that the presence of firewood ensures the house will always have food and warmth and that their daughter is in safe hands.

Achola was escorted by her mother Ruth Omamo and handed over to her mother-in-law First Lady Margaret Kenyatta before being escorted to her new home by her aunts and her husband’s aunts amid ululations and cheers.

On coming out from the house, the bride was adorned by her mother-in-law and sister-in-law Ngina before receiving gifts from her aunts who included Senator Beth Mugo, Kristina Pratt, Nyokabi Muthama, Anna, Pip, and Christine Gakuo (First Lady’s sisters) and Defence Cabinet Secretary Raychelle Omamo among others.

Uhuru’s mum, Mama Ngina Kenyatta could not hide her joy as her new “co-wife” (Jomo is named after her husband) was ushered in her new home.

In his brief speech to the guests, the President told the youth that the future belongs to them but it comes with responsibilities.

“Now that my son has his own home is a sign that we are aging and we shall have to hand over some of the authority to the young people but it comes with responsibilities” he said.

Jomo’s aunt Kristina Pratt said the marriage was a culmination of a long standing friendship between the Kenyattas and the Omamos where siblings from the two families went to the same school when the late Odongo Omamo, Achola’s grandfather was serving in Kenyatta’s cabinet.

Jomo and Achola’s ‘Itara’ ceremony Reviewed by samrack on November 14, 2016 .

Share thisFacebookTwitterPinterestEmailWhatsAppJomo with Achola who is received by he mother in law Margaret Kenyatta. Jomo and Achola’s ‘Itara’ ceremony President Uhuru Kenyatta’s new daughter in-law Fiona Achola got a warm reception at the President’s rural home in Ichaweri Gatundu on Saturday during the traditional ceremony “Itara”. She was received by hundreds of people including the