It’s a living hell for Kenyans flying back from overseas 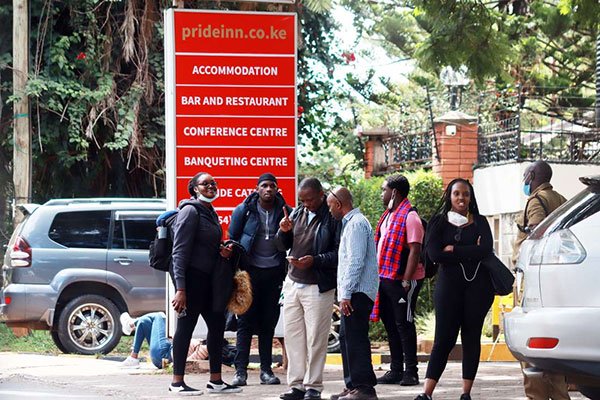 Some of the Kenyans who were turned away at PrideInn Hotel

It’s a living hell for Kenyans flying back from overseas

Overwhelming numbers, poor planning and Kenyans’ indiscipline have been blamed for the mess that is the quarantine plans for passengers arriving from abroad.

With the government expecting at least 3,000 international passengers, the selected hotels for self-quarantine had not anticipated such numbers.

The reality of being a passenger arriving at Jomo Kenyatta International Airport (JKIA) during this Covid-19 season hit hard for 22-year-old Okari Wabunya and 20-year-old Jamie Nyamongo when their KQ plane from London touched down Tuesday at 4:30am.

The two are university students in London and among dozens of passengers who were Tuesday held at JKIA for about four hours before they could be screened and allocated a National Youth Service (NYS) bus to transport them to selected mandatory quarantine facilities.

The Nation caught up with them outside PrideInn Rhapta in Westlands. They were stranded and confused after missing space at the hotel, with their parents following behind but keeping a safe distance.

While for them their main problem was not how to pay for their 14-day stay at any hotel, other passengers who had travelled in the same bus with them had to get alternative accommodation because they could not afford to stay at the hotel.

They said the hotel was charging $60 (Sh6,380) per night, an amount they felt was too expensive.

“Initially, we had been told there were 16 spaces at the hotel but upon arrival, the management said it had been fully booked. We are waiting to see what will happen. We are willing to quarantine ourselves even here but the whole process needs to be better planned,” Mr Wabunya said.

The two came home for the upcoming Easter holidays now that schools in London have closed to curb the spread of the new coronavirus.

“There was no point of staying there when we just wanted to be with family,” said Mr Nyamongo.

After waiting outside the hotel for several hours, the team was driven to the University of Nairobi’s School of Business in Lower Kabete, where they met with another team that had been ferried to the venue by a NYS bus. But for some reason, both teams could not be accommodated there.

In the midst of the confusion, the two teams mingled with each other, made contacts with family and the officers escorting them, oblivious of the danger they were exposing each other to.

Later, the two buses were sent to different locations. The Nation followed a team of about 10 passengers, including a child, who were driven to Corat Africa, next to Catholic University of Eastern Africa. They arrived at about 2pm, hungry and still nursing some jet lag.

Mr John Mutwiri Miriti, a master’s student at the London School of Economics, said they arrived at JKIA on Monday night and were only allowed to leave the airport yesterday at 7.20am.

He said they spent almost an entire day in a bus looking for accommodation. From JKIA, they were driven to Kenyatta University, where they were denied access. They were then driven to PrideInn Hotel, then UoN and finally to Corat Africa, where accommodation was available for nine.

“This is a new phenomenon to all of us, but we are asking the Ministry of Health to make the logistics more bearable. At least ensure that we get water, meals and accommodation with no much trouble,” said Mr Miriti.

Sources at Kenyatta University said the institution opened its doors to over 60 passengers on Monday night. They are staying at the conference centre. The sources said the university did not have extra accommodation as students left their belongings in the hostels.

PrideInn Hotel, which had been closed temporarily, was reopened on Monday night to accommodate passengers arriving via JKIA. A team that arrived Tuesday from Addis Ababa, Juba and other cities mingled with each other as they shared a breakfast meal that was served in a buffet.

Despite the hotel indicating that all customers would be subjected to utmost screening using thermo guns by trained staff, passengers who are booked there said they are yet to be taken through any procedure. Staff at the hotel served the passengers without wearing face masks.

One passenger, who requested anonymity, said he had sat next to a woman who arrived from the US inside the bus that took them to PrideInn.

“While I had my face mask on, she had no protective gear, but we kept talking and sharing our experiences,” the passenger said.

“We came from different cities but have shared utensils and mingled freely. Is this how quarantine is conducted? Our company had made reservations for us at a hotel on Thika Road, where the firm’s doctor was meant to attend to us, but we were forced to come here.”

“The bills are high, who will cater for them? We arrived at a time when they had closed due to lack of customers but they opened and called in some few staff, who helped us to settle. The rooms are dusty, we are mingling freely and it’s chaotic.”

It’s a living hell for Kenyans flying back from overseas Reviewed by samrack on March 26, 2020 .

Share thisFacebookTwitterPinterestEmailWhatsAppSome of the Kenyans who were turned away at PrideInn Hotel It’s a living hell for Kenyans flying back from overseas Overwhelming numbers, poor planning and Kenyans’ indiscipline have been blamed for the mess that is the quarantine plans for passengers arriving from abroad. With the government expecting at least 3,000 international passengers, the