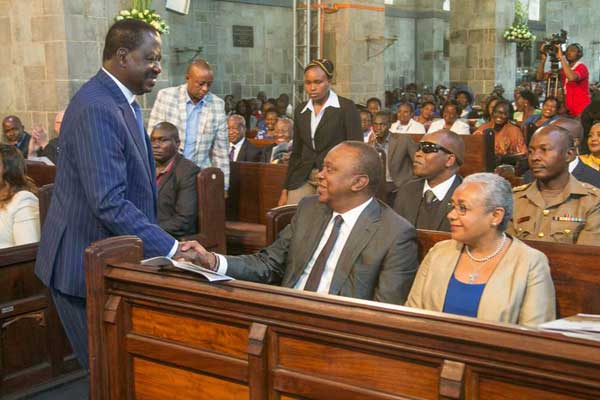 President Uhuru Kenyatta on Sunday extended an olive branch to Nasa leader Raila Odinga by inviting the opposition chief for talks to end the current political stalemate in the country.

But Mr Odinga, while indicating that he was willing to meet with the President, insisted that the opposition would only take part in talks aimed at addressing the electoral injustices of the August and October elections, and nothing else.

President Kenyatta, responding to calls for dialogue by the Archbishop of Canterbury, The Most Rev (Rtd) Justin Welby, during centennial celebrations for the Anglican Church of Kenya at All Saints Cathedral in Nairobi, said he was open to talks on uniting the country and rebuilding broken relationships. Also present during the event were Mr Odinga and Chief Justice David Maraga.

This was the first time President Kenyatta and the opposition leader were meeting in public since the October 26 repeat presidential elections.

In his sermon, Archbishop Welby said reconciliation was the only way that the country could retain its status as a model nation for Africa, and that disagreements can only be sorted out through understanding.

“Kenya has been a good model of peace and reconciliation across Africa,” he said. “Reconciliation is a supreme gift of Jesus, and is so costly it caused Jesus to die on the cross.”

“We have heard your message on the need for reconciliation and I hope everyone in the congregation has heard it as well,” President Kenyatta responded to Archbishop Welby’s request, in the process giving what appeared to be a veiled challenge to Mr Odinga.

But the former Prime Minister, talking to journalists minutes later, remained adamant that his victory in the August 8 elections was “stolen”.

“The foundation of any reconciliation in any country is justice,” he said. “Kenyans must be given justice, and for electoral justice to be served, the vote must count. Votes cast at the polling stations must be the same votes announced at the tallying centers. Until we do that, there will be no justice.”

Mr Odinga spoke after a closed-door meeting, which lasted about one hour, with the ACK archbishops and the British High Commissioner to Kenya Nic Hailey, in which the opposition leader is said to have explained his coalition’s position on the quest for electoral reforms.

Just two hours after the calls in church for reconciliatory talks, opposition MPs held a rally in Kamukunji, Kibra constituency, where they threatened to swear in Mr Odinga in two weeks’ time should Mr Kenyatta, who won the repeat election boycotted by Nasa on October 26, be sworn in.

The MPs said Mr Odinga won the August election. There were indications yesterday that a petition against Mr Kenyatta’s October 26 victory will be filed at the Supreme Court today, meaning Mr Kenyatta might not be sworn in yet, as the court must first determine the case.

Siaya Senator James Orengo said “Jubilee should not make the mistake of swearing in Uhuru Kenyatta, or else as they use Kasarani, we will use Nyayo Stadium to also swear in Raila Odinga as the president”.

“I want to tell our supporters not to despair because we have crafted our plans well,” he continued. “We have read the Constitution and understand the law very well. Our plan will work out perfectly.”
Constitutional lawyer Mutakha Kangu told the Nation that two parallel swearing-ins ran the risk of delegitimising both Mr Kenyatta’s and Mr Odinga’s victory claims.

“Government is not just about the law, but legitimacy,” said Mr Kangu. “We risk having a situation where two people will claim to be president, and from there on we will still be questioning the legitimacy of their election.”

The opposition, also in a bid to express their displeasure of the electoral injustices, said they were planning the “mother of all demonstrations” this week.

In addition to the demonstrations, the opposition will this week also start debate on the establishment of people’s assemblies, with the ultimate goal of passing a resolution not to recognise President Kenyatta’s leadership.

The legislators urged their supporters to continue boycotting products and services from Safaricom, Bidco and Brookside, claiming they are supporting Jubilee in subverting the will of the people at the ballot.

The All Saints Cathedral has in the recent past been a refuge to pro-democracy activists who were escaping the state tyranny.

Among those who have found refuge in the Cathedral were former President Mwai Kibaki and the late Prof Wangari Maathai.