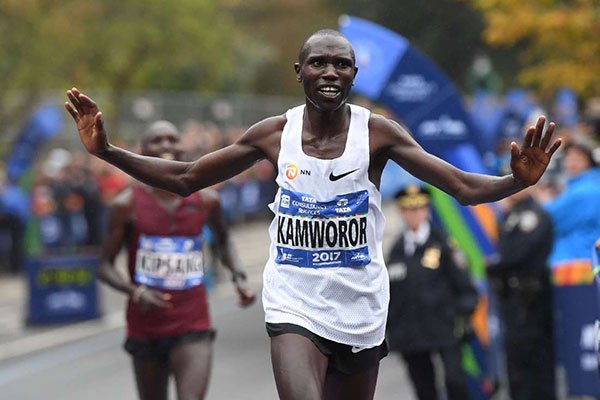 Geoffrey Kamworor of Kenya reacts after crossing the finish line to win the Men’s Division during the 2017 TCS New York City Marathon in New York on November 5, 2017. PHOTO | TIMOTHY A. CLARY |  AFP

Kamworor broke away from a pool of four athletes with three kilometres to go to win in 2 hours, 10 minutes and 53 seconds.

Kamworor, who had finished second in 2015 behind Stanley Biwott, was this time around the master as he broke away from among others Kipsang and Ethiopian Desisa Lelisa and Lemi Berhanu in the last three kilometers to win.

Kipsang finished second in 2:10:56 just three second behind Kamworor, as Dedisa wrapped up the last podium place finish in 2:11:32 followed by Berhanu in 2:11:52.

Kamworor was on two occasions used as a pacesetter at 2011 Berlin and 2012 Rotterdam Marathon, before his full marathon debut at 2012 Berlin.

At the 2011 Berlin Marathon, Kamworor pushed Patrick Makau to break the world marathon record with new times of 2:03:38 as Ethiopian Yemane Tsegay won in 2012 Rotterdam.

The Kenyan would go for his full marathon debut in September, where he ran a fast time of 2:06:12 hours for third place at the 2012 Berlin Marathon where Geoffrey Mutai triumphed.

Kamworor was also in the 2014 Berlin Marathon field that saw compatriot Dennis Kimetto breaking the world record in 2:02:57. Emmanuel Mutai from Kenya settled second in 2:03:13 followed by Ethiopian Abera Kuma in 2:05:56 and Kamworor 2:06:39.

Kamworor won the World Half Marathon title in 2014 Copenhagen before defending in in 2016 Cardiff. He also won the World Cross Country championships in 2015 in China before staging a successful defence in 2017 Kampala.