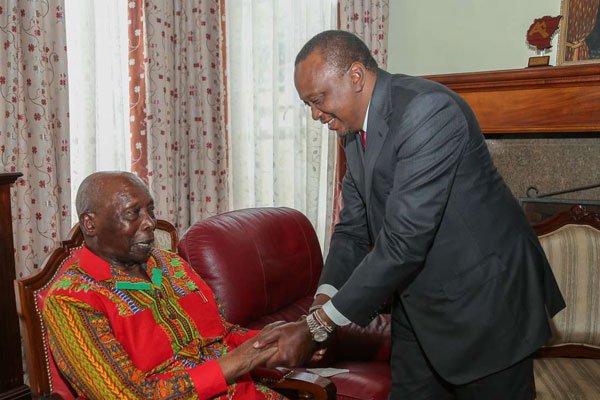 When Mr Daniel arap Moi won the presidency in 1992, with a paltry 36 per cent of the votes cast, his opponents quickly raised the question of legitimacy — just as Mr Raila Odinga’s National Super Alliance has done after President Uhuru Kenyatta’s October 26 re-election.

But how Mr Moi managed to survive an energised civil society, and an opposition that had learnt from its mistakes, is something that involved local and diplomatic manoeuvres.

Mr Moi was shrewd and scheming; a perfect barnstormer in African politics who manipulated the opposition like wooden marionettes.

How he outfoxed the opposition and the civil society and why the Americans came to his aid is a story that informs the trajectory of African politics.

It tells the other half of the story on why the opposition floundered.

As a bloc, the opposition could have easily won that race with an overwhelming 64 per cent of the vote — which was more than the 61 per cent that Mr Mwai Kibaki received in 2002.

FOOD CRISIS
What they didn’t know was the game had already changed and that the Americans, who had been backing the opposition, had shifted their loyalty thanks to the food crisis that was enveloping Somalia.

They had found good ground in Mombasa from where they conducted a low-key reconnaissance of Somalia identifying the airfields and routes for US ground involvement.

As the campaign tempo towards the General Election increased, and when the opposition was talking of a boycott, the US sent their Undersecretary of State for African Affairs Herman Cohen to see Moi at State House.

FRIEND OF THE US

He also had a cheque donation of $5 million (about Sh500 million of today’s rates).

There was a reason for that: “Moi was one of our best friends in Africa. He never refused any of our requests, including rights to use the port of Mombasa and the international airport at Nairobi for US military movements in the Indian Ocean,” Mr Cohen writes in his book The Mind of the African Strongman.

Earlier on, during the clamour for multiparty politics, Mr Cohen had approached President Moi and asked him to release the political detainees — Mr Matiba and Mr Charles Rubia — and those convicted of political crimes.

Mr Cohen was shocked that the President had without much prodding said: “OK, I will release all of them. They are not worth the food that we feed them.”

Mr Cohen and President Moi had been friends — and for a reason.

When the Americans were looking for somebody who could convince Mozambique rebel leader Mr Alfonse Dhlakama, the head of the anti-communist guerrilla movement Renamo, to commence talks with Mozambique President Joaquim Chissano, it was Mr Moi who offered to help.

He not only gave the rebel leaders Kenyan passports but also secretly sent his permanent secretary Mr Bethuel Kiplagat to take charge.

On October 1992 — two months to Kenya’s election — a treaty had been signed.

KENNEDY FAMILY
Thus, when Mr Cohen arrived in Nairobi ahead of the December 29, 1992 General Election, those who keenly watched the body language between the two could easily tell the ground had shifted.

Elsewhere, the influential Kennedy family — which was pro-opposition — was trying to organise a meeting between Mr Cohen and the opposition leaders in Nairobi.

Mr Cohen refused since that could have jeopardised their relations with Mr Moi whose help they were seeking in taming the emerging Horn of Africa crisis.

Shortly after the meeting with Mr Moi, and 20 days to the Kenyan election, President George Bush Snr ordered a large US military force to Somalia with the first US Marines landing in the first phase of “Operation Restore Hope” on December 10, 1992.

YK92
As Kenyans voted, Mr Moi had the backing of the Americans who were looking upon him.

The bank coffers had been opened thanks to Cyrus Jirongo’s Youth for Kanu ‘92, and Kamlesh Pattni’s Goldenberg, which oiled the Kanu campaign to levels that destroyed the economy.

Between the nominations and ahead of the election, some 50 politicians defected back to Kanu, which easily won nine parliamentary seats unopposed.

FRESH ELECTIONS
After the elections — and Kanu was accused of cooking some numbers against Mr Matiba — the opposition embarked on a campaign that questioned the legitimacy of the victory.

An international journalist asked: “But Moi was elected?” and an obviously irritated Mr Matiba mused: “Who elected him. Even in his home area he was not elected…”

That was not true, though, even if Mr Matiba had few sympathisers within the opposition for wrecking the original Ford party.

VOTES
As Kenya historian Charles Hornsby would later write in his book, Kenya: A History Since Independence, “Moi almost won the presidency legitimately, in that he polled a larger number of genuine votes than any other candidate…the splits between the DP and Ford, then within Ford, allowed Kanu to win on a minority vote.”

After Mr Moi managed to knock out Mr Matiba’s presidential petition on a technicality, the President embarked on a campaign to undermine the opposition.

Mr Matiba had made the mistake of boycotting parliament, which he said was a “waste of time” and only made “technical appearances” to save his seat.

This weakened his party, and was also ridiculed by the media.

DEFECTOR
Mr Matiba had become the official leader of opposition — thanks to a single seat more than Mr Odinga Snr’s Ford Kenya.

And since he was the incessant trouble-shooter, the Kanu mandarins approached one of his MPs, Makuyu MP Julius Njoroge, to defect to Kanu.

And he did, opening a hilarious battle inside parliament on who would occupy the Leader of Opposition seat.

The ground had been tested earlier after Bonchari MP Protus Momanyi abandoned DP and easily won the seat with 4,288 votes against Ford-Kenya’s Richard Mbeche, who polled 1,276.

The doyen of opposition politics accepted the money though he would later say he only saw “a young man” whom he thought was a supporter.

But at the party, the Secretary General, Gitobu Imanyara, said the Sh2 million was a “bribe intended to shut Odinga up over Goldenberg”.

HARAMBEES
Whether this was plotted by State House is not clear but what followed this donation wrecked the once-vibrant party.

With the Young Turks out of the party, President Moi went on to consolidate his hold on Ford Kenya and started what was known as “cooperation”.

He not only invited Mr Odinga Snr to a tour of Turkwel Gorge Dam but also started a wave of harambees in Western and Nyanza provinces with his famous mantra “siasa Mbaya, maisha Mbaya”.

In one of the Harambee rallies in Bondo, Mr Moi’s education minister, Prof Jonathan Ngeno said the opposition leader would succeed President Moi.

Mr Moi’s next target were defectors from the marginal areas, which had voted for Mr Matiba.

Between August 1993 and August 1994, Ford Asili lost five Luhya MPs and several councillors in quick succession — a move that frustrated the opposition.

The first to be targeted was Nicodemus Khaniri of Hamisi who defected to Kanu on August 1993 followed by Apili Wawire of Lugari in November.

In all these, Kanu won the seats at a time the opposition was in disarray.

OCCUPIED
In Nairobi, Starehe MP Kiruhi Kimondo defected from Ford Asili in 1994 and although then Nairobi Mayor Steve Mwangi won the seat, he resigned in 1996 citing disappointment and surprisingly, Kanu won the by-election.

It is not clear if Mr Mwangi was sweet talked to defect but what we know is that a few weeks after his resignation, he hosted Mr Moi in Gatundu where some opposition councillors defected to Kanu.

There were other defections in Nyanza where Mr Charles Owino Likowa defected as Migori MP, Tom Obondo in Ndhiwa and Ochola Ogur in Nyatike, all from Ford Kenya.

But the opposition retained these seats.

Kept busy by the defections and their own internal intrigues, the opposition soon forgot to question Mr Moi’s legitimacy.

With the defections, Kanu now had 122 members including the nominated MPs while the opposition had only 78.

The defection of John Keen as Mr Kibaki’s DP Secretary General and Ms Agnes Ndetei, another senior figure within the party, became an indicator of Mr Moi’s determination to eclipse the opposition.

Meanwhile, there was tension within Ford Kenya, then the official opposition, over Mr Pattni.

The Ford Kenya Chairman, Wamalwa Kijana, who chaired the Parliamentary Accounts Committee (PAC), was at loggerheads with Mr Raila Odinga over the Goldenberg scandal.

On the one hand, Mr Odinga was angry that PAC had decided to exonerate Mr Pattni from wrongdoing and was pushing for investigations.

On the other hand, Mr Wamalwa was accusing Mr Odinga of embarrassing and disrespecting him.

Mr Wamalwa had even recommended that Mr Pattni be paid a further Sh2.1 billion, which was rejected by parliament thus sinking the opposition into the Kanu mess.

It is these battles that saw Mr Odinga defect to the National Development Party and abandon the tainted Ford Kenya.

“There might be other things I could compromise but not this,” he wrote in his autobiography.

They could not agree on a roadmap towards unity as the 1997 elections approached.

By this time, Mr Moi had weakened them and the only tangible opposition remained in the Mt Kenya and Nyanza regions.

The only major addition to the 1997 race was Mr Odinga and the boycott by Mr Matiba.

After Mr Kibaki lost the race to Mr Moi, who won with 40 per cent of cast votes, it was now the younger Mr Odinga’s turn to fall to Mr Moi’s “cooperation” trap.

The rest is history and it was Mr Odinga who had the last laugh after he destroyed Kanu from within.

But history, has not been kind to him either and now he is facing President Moi’s two apostles: Uhuru Kenyatta and William Ruto.

Whether they will apply Mr Moi’s tactics is not known but it is a political scene worth watching.

How Moi outplayed opposition on legitimacy queries Reviewed by samrack on November 5, 2017 .

President Uhuru Kenyatta pays Daniel arap Moi a courtesy call at his Kabarnet Gardens residence in Nairobi on February 16, 2017. Mr Moi was shrewd and scheming; a perfect barnstormer in African politics. PHOTO | COURTESY  How Moi outplayed opposition on legitimacy queries When Mr Daniel arap Moi won the presidency in 1992, with a