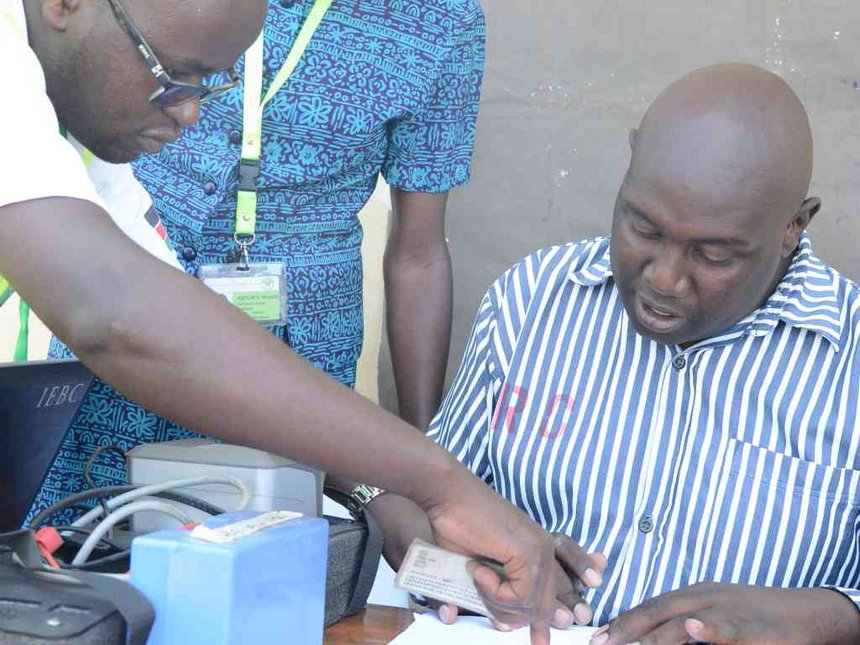 The IEBC registered 3.7 million new voters against its target of 6.1 million in the just concluded mass listing, chairman Wafula Chebukati has said.

The commission registered 3,782,089 in two phases of the mass listing.

“It is important to note that these are not final figures,” the chairman said.

“We expect the new voters to be added to the roll after clean-up and verification,” he said, adding they were ready for a free and fair election on August 8.

The IEBC boss said the cleaning of the register will involve the removal of dead voters and matching of entries to ensure there are no duplicates.

He said the preliminary register will be ready 40 days to the election and will be sent to field officers for confirmation of entries before presentation to the public from May 10.

Pius Lumumba, who is serving a life sentence at Naivasha GK prison, shows his new voters card, after getting registered by the IEBC, February 21, 2017. /GEORGE MURAGE

The IEBC said there are 49,867 prisoners in 118 facilities across the country.

Noting 30,388 were convicted and did not have IDs, Chebukati said only those with IDs will be allowed to register.

“To be registered, prisoners must be of sound mind and should not have been convicted of an election offence in the last five years,” he noted, adding they will only vote for president.

“It must be noted that this is the first time in history that prisoners will be given a chance to participate in an election as directed by the Supreme Court.”

Chebukati said some 5,952 convicted inmates and 2,236 others who were still in remand had IDs.

He added that the commission established that some 5,696 convicted inmates had left their IDs at home compared to 5,613 inmates who were in remand.

The IEBC’s registration of prisoners is expected to end on February 28.

Chebukati added that the commission received 1,001,819 applications for transfers with some areas registering more of these than new applications.

He said a clearer picture on the trend will be established once data is analysed.

“These figures mean a lot with regard to how balanced polling stations are and other areas of preparedness,” he said.

Chebukati said the commission had rolled out registration of Kenyans in Diaspora after the closure of mass voter registration.

David Ongai, who is serving a life sentence at Naivasha GK prison, shows his new voters card after getting regsitered by the IEBC, February 21, 2017. /GEORGE MURAGE

The chairman said on February 10 that political parties will conduct all their party primaries in April 2017 as the IEBC reviewed timelines ahead of the general election.

Following the review, the IEBC boss said political parties have 14 days – between February 20 and March 2 – to submit party nomination rules.

They will present party membership lists between March 9 and March 19 and the names of candidates for party primaries from March 26 to April 5.

The gazettement of candidates and dates of primaries, Chebukati said, will be done between March 30 and April 12 while party primaries will be held from April 13 to 26.

The chairman urged political parties and aspirants to conduct primaries within the rule of law and ensure the processes are peaceful and credible.

“We shall not hesitate to take action against those violating the electoral code of conduct,” he said.

Chebukati said that the Elections Act allows the commission to conduct party primaries although he did not confirm whether they will oversee Jubilee Party’s primaries.

He said they will meet Jubilee on February 28 to discuss issues touching on costs and the conflict of interest where the commission will be the arbiter in case disputes arise from the primaries.

“My view would prejudice the meeting. But I wish political parties would carry out their primaries without involving us…but we have to abide by the rule of law and that is why we will have that meeting to clear the grey issues,” Chebukati said.