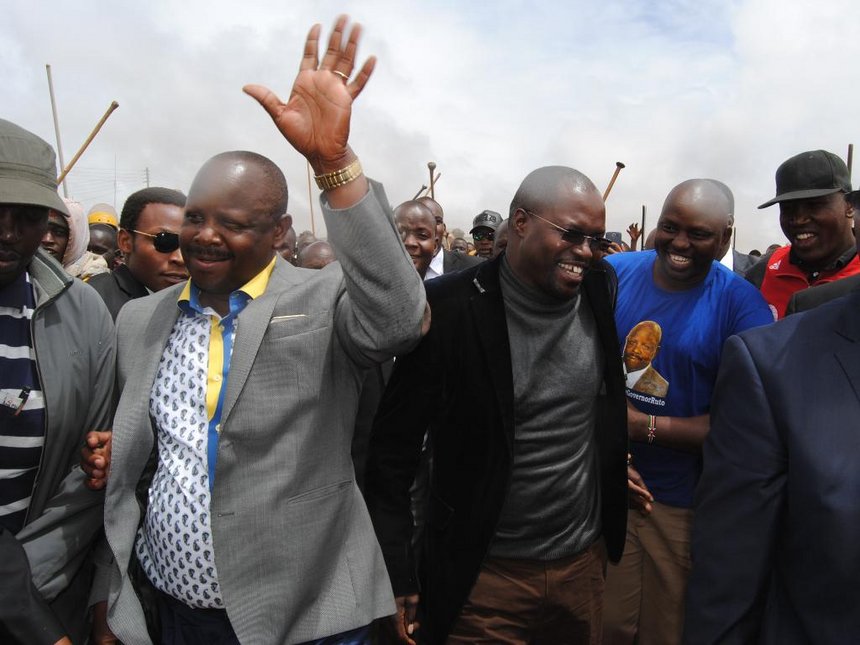 Bomet Governor Isaac Rutto and Emurua Dikirr MP Johana Ngeno are welcomed by the residents of Ntulele trading centre on Saturday during a stop-over on his way to Bomet town for a homecoming ceremony to be held on Sunday, November 20, 2016. /KIPLANG’AT KIRUI.

Hundreds of people turned up in Narok and Bomet counties on Saturday to welcome Governor Isaac Rutto on his return from South Africa.

The residents, who started lining up along the Narok-Bomet highway as early 8am, chanted songs and danced in praise of the governor for his efforts to protect devolution in the country.

Rutto, who returned from SA on Friday where he left for an eye surgery, made stop-overs at Ntulele, Narok town, Ololulung’a, Mulot, and Longisa.

He later addressed a gathering in Bomet town in the company of MPs Johana Ngeno (Emurua Dikirr), Zakayo Cheruiyot (Kuresoi South) and his wife Esther Rutto.

Rutto said that he has forgiven the Administration Police officer who allegedly lobbed a teargas canister and injured him at Silibwet on November 6.

The governor was injured during a confrontation at a football match between Bunge FC and Silibwet FC.

This was after his supporters and those of National Assembly deputy speaker Joyce Laboso clashed.

Rutto said it was not the officer’s fault that he was injured but only that the latter was was working under “instructions from above”.

“I have forgiven the police for what happened. It was not his wish…he was acting on instructions from some power quarters in the Jubilee administration,” Rutto said.

He said that it is sad that the an officer from discipline force can be misused so that some few people can earn political mileage.

“I pity this officer. As Kenyans, we should oppose such leaders whose main agenda is to misuse young people so as to advance their own interests,” Rutto said.

While thanking Kenyans for praying for him and the quick recovery wishes, Rutto said he will not relent in the fight against police brutality in the country.

He was airlifted to Nairobi hospital before being flown to South Africa for surgery.

Rutto said that it is sad that the Jubilee government has been frustrating devolution by scuttling release of more funds to counties.

“I want to make it clear to Kenyans that when we are demanding for more monies to the counties, it should not sound like we are undermining or want to wrestle power from the Jubilee government,” Rutto said.

He added that the some of the top government officials have fought so hard to reverse the gains brought about by devolution.

“They have used every opportunity to demonise counties and governors whenever they demand for more money,” he said.

The former council of governors chairman said that he formed the Chama cha Mashinani (CCM) because of Jubilee’s take on devolution.

He said that the new outfit will fight for equitable distribution of resources and urged Kenyans to support it.

On his part, Ngeno challenged the Jubilee government to stop corruption saying it has now reached an ‘alarming state’.

“We cannot move as a country with the high level of corruption. It is more unfortunate that top government officials are the ones perpetuating the vice,” said Ngeno.

Cheruiyot urged Kenyans that during the next general election, they should only elect leaders who will protect their resources.

Hundreds line up on Narok-Bomet highway to welcome Rutto from SA Reviewed by samrack on November 19, 2016 .

Share thisFacebookTwitterPinterestEmailWhatsAppBomet Governor Isaac Rutto and Emurua Dikirr MP Johana Ngeno are welcomed by the residents of Ntulele trading centre on Saturday during a stop-over on his way to Bomet town for a homecoming ceremony to be held on Sunday, November 20, 2016. /KIPLANG’AT KIRUI. Hundreds line up on Narok-Bomet highway to welcome Rutto from