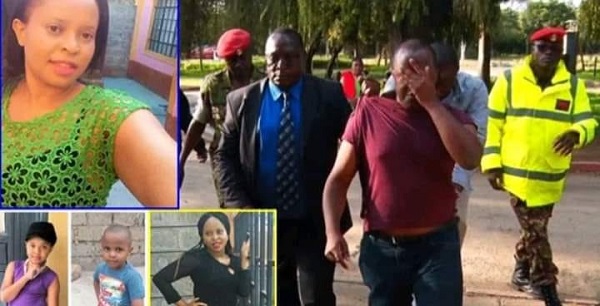 Nyeri High Court has revealed how a casual worker was duped by a former military officer Peter Mugure to dispose of the bodies of his ex-lover and children.

While ruling on Mugure’s bail application, Justice Jairus Ngaa revealed how Collins Pamba, in his police statement, narrated how he helped the former soldier to dispose of the bodies.

The former military officer is accused of murdering Joyce Syombua, Shanice Maua and Prince Michael on October 26, last year at the Laikipia Airbase in Nanyuki.

Their bodies were recovered in Thingithu area, within Nanyuki after Pamba led the police to the site. The casual worker was in Nairobi on October 26 and while on his way back to Nanyuki, he received a call from Mugure asking him where he lived. The former military officer told him there was some work to be done at the barracks.

“He asked me to go there so he could show me the work,” read Pamba’s statement.

The casual worker revealed that Mugure called him again to inquire about his destination and he (Pamba) later switched off the phone.

He arrived in Nanyuki at 5pm and switched on his phone only to find that Mugure had attempted to call him several times.

“Mugure called Pamba and asked him to board a motorbike and meet him at Kirimara Sprigs hotel in Nanyuki,” the judge read, adding that the former military officer paid the motorbike rider Sh50.

“He took me behind the hotel and gave me Sh100 and asked me to board a motorbike to the airbase. I went to the bar hall of the officers’ mess where I waited for him for about 30 minutes.”

Pamba got impatient and left for his house in Thingithu area. Mugure called him again at 6.30pm to find out where he was. Pamba called the former military officer at 10pm and he instructed him to board a motorbike to the barracks.

“I entered the bar but I did not find him. One lady asked me why I was at the mess at that hour and I told her that I had gone to collect my phone battery that I had left charging,” he said.

Tied it with a rope

Pamba proceeded to Mugure’s house on Block A behind the officer’s mess and found him at the parking lot, next to his car, a Subaru Impreza. He led the casual worker to the bathroom.

“I saw a body of a girl tied with a rope inside a clear gunny bag lying on the bathroom floor and a boy’s body in the bath tab. I was shocked but he told me that was the work he had called me to do,” read the statement. Mugure asked Pamba to help him carry the bodies to his car. Prince Michael’s body was loaded first in the car’s boot followed by Shanice’s. “I followed him back to the house and proceeded to his room where I saw the body of a woman lying behind the chairs.”

Syombua’s body which had the face covered was not in a gunny bag.

They put the body in a gunny bag and Mugure tied it with a rope before they carried it to the car’s boot.

“She was so heavy and we stopped several times before putting it in the car. We placed it on top of the children and Mugure covered them with a car mat,” he revealed.

“He drove off and on the way I asked him why he did it and he said that he loved Syombua and wanted to marry her as a second wife but she was not faithful. He said the only wanted him to spend money on her and the children,” Ngaa read the Pamba’s statement. Mugure told Pamba that Syombua had a disagreement with his first wife despite the fact she was not opposed to his idea of marrying her as a second wife. They drove to Makaburii in Thingithu where there were heaps of soil dumped by contractors. The former military officer turned off the car lights. Pamba revealed that Mugure had already dug a shallow grave where the bodies would be dumped.

Syombua’s body was put in the grave first followed by her son and the daughter.

Mugure collected a spade from the car and Pamba helped him to bury his family.

The former military officer threatened to kill him if he disclosed the matter to anyone.

Mugure promised to push for Pamba’s recruitment in the military which was going on at the time. “He asked me to take my academic certificates to him the following Monday and also clean his house and car the following day,” he said.

Pamba disembarked near Nanyuki Maternity and Nursing home and walked to his house some minutes after 1am.

Mugure had applied to be released on bail or bond but Justice Ngaa ruled that there was damning evidence against him and he could interfere with witnesses including Pamba, a co-accused in the matter.

Prosecutor Peter Mailanyi had opposed the bail application. The Judge also revealed that another witness identified as Peter Mwangi Maina stated that Mugure had asked him to kill Syombua, a request he declined.

Mugure will remain in King’ong’o prison. Hearing continues on March 23.

Share thisFacebookTwitterPinterestEmailWhatsAppFormer military officer Peter Mugure at Nyeri High Court Pic: Pic Courtesy How ex-soldier Killed, ferried, buried bodies of lover, two children Nyeri High Court has revealed how a casual worker was duped by a former military officer Peter Mugure to dispose of the bodies of his ex-lover and children. While ruling on Mugure’s