This comes as the developer continues to face challenges growing revenues from sale of land and property, further frustrating revenue generation to finance completion of its projects. 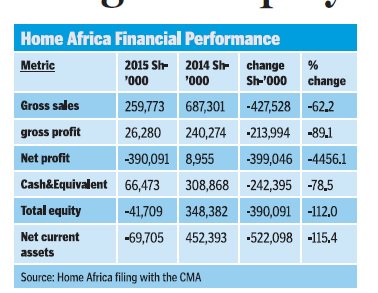 “The average projects’ percentage of completion, which determines how much deferred revenue is booked as sales of the group, stood at an average of 40%. As the percentage of completion increases over time, the sales booked as deferred revenue will be gradually transferred into the group’s profitability statement,” Home Afrika said in a statement to the Capital Markets Authority.

The company will now sell on behalf of other developers and property owners as well as offer property management services to this new customer base.

“The new business model will see the company venture into real estate management and real estate agency services with the goal of diversifying revenue and cash flow sources,” the listed property developer said.

As part of the changes in the business model, Home Afrika has also instituted board and management changes, with only three of the founding directors surviving a boardroom shakeup announced last week.

Linus Gitahi has come in as Chairman while resolution health Chief Executive Peter Nduati and Rachel Mbai coming in as directors. The changes in the boardroom have seen the exit of seven directors, five of whom had held the positions since the firm listed on the Nairobi securities Exchange.

Home Afrika had last week sought and received approval from the capital markets authority to delay the release of its results.