From Vision 2030 To Wheelbarrow Legacy: What Time Is Kenya?

From Vision 2030 To Wheelbarrow Legacy: What Time Is Kenya?

The prophets of doom unto despair are brainwashing the youth to focus on their immediate problems by deceiving them with small gifts that are not in line with vision 2030 of a Kenya competing with other countries in the global market.

The 2030 vision was meant to be a long term development blueprint for the country and the same, was designed to include the Diaspora whose remittances could be directed to help them while at the same time impacting the economy of Kenya.

The aim was to create a better society for all and especially among the middle and low income earners. It was not a local narrow vision but a global one that would improve the quality of life for all by the year 2030. The envisaged vision however may not be achieved as a lot of time has been wasted and is still being wasted on village politics to nowhere and whose only purpose is to clinch the top seat with or without any agenda. 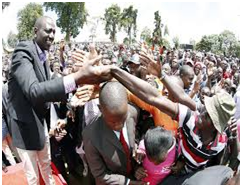 The vision was from a wide perspective of stakeholders who were motivated by a collective aspiration for a better society by the year 2030. If followed to the word, it was to transform Kenya to a newly industrialized country that would eventually yield a middle income economy with all enjoying a secure clean environment.

After that is achieved, it will then allow and make Kenya into a globally competitive and prosperous Nation. If we now focus on the current trend of politics happening in Kenya, it is clear that the same vision is now being trashed slowly and being replaced by a dependency kind of vision where those with potential to advance the country are ignored.

The focus is to those that cannot progress without being pushed materially and are now fed with cheap propaganda of enjoying meals at the house at the hill when the General elections are concluded.

The long term vision is now replaced with short term ones that aim at brainwashing the youth to sing a song of promised empty joy till election day and the same song to be concluded the day they will cast their ballot.

Progressive Kenyans however still believe that they voted for a Jubilee Government that vowed and promised to continue with the 2030 development policy and shortened the same while calling it the 5 pillar agenda. It was still in line with the said policy. The President even later added a different but a combined vision of uniting Kenya beyond the year 2050 where every Kenyan will be able to move anywhere in the country freely.

We are now not anywhere near the accomplishment of the vision 2030 and the remaining 10 years, may never achieve the same and its like an abandoned vision given the fact that the Deputy President, has devised his own low-priced deceiving wheelbarrow legacy.

If the Government we voted to serve Kenyans have failed to deliver its promises, who will deliver the same and why is the person derailing the vision not getting impeached for gross misconduct as his actions amount to the same?.

It was just the other day at Bomas of Kenya where the crowds jeered him as he tried to convince them on the need to amend the BBI proposals, and 5 days later still ignoring their cries and continuing disobeying the President wishes.

President Uhuru will not do any justice to Kenyans if he hand the baton to a person not waiting at the mark line but one that has gone half way the field. He will be too tired to run to hand him the baton and just like he put it at Bomas of Kenya, the runner may not complete the race without a baton as he will be disqualified and rejected.

William Ruto in essence has disqualified himself by distancing himself from the vision they started with Uhuru Kenyatta and starting a new vision that does not embrace all in Kenya, is a mission in futility and a doomed vision. We are in a defining moment as we come close to President Uhuru term and the future of Kenya, will be determined by those that are willing to continue with vision 2030 and beyond.

We must say no to short term vision and get serious with the vision that will embrace all in Kenya and those outside Kenya in the so called Diaspora that are forgotten and not taken as part of the process of building a united Kenya. The Diaspora is an integral part of progress in Kenya due to the part they play in helping the domestic consumption and if there is a Government in place that will focus on Diaspora with a more serious approach, the lost time in developing our great country can still be recovered.

It’s all the same Kenyans who will decide, and if they go by short term visions and choose to be dependents, then it will be their choice and the world will accept their wishes and watch silently for another five years.

Are you willing to change Kenya or to remain stagnant? Protect your vote like a true citizen and make a good decision in 2022 that will not only benefit you, but the many generations to come.

All the same, never give up on your hopes and inspirations in life and don’t be derailed by the auspicious confines others have placed on their own lives and want to include others. The vision of your true destiny, does not dwell within the narrow-minded outlook of the naysayers, and the prophets of doom as theirs is short term and bound to fail and therefore, the way forward, is to aim for a bigger vision beyond 2050.