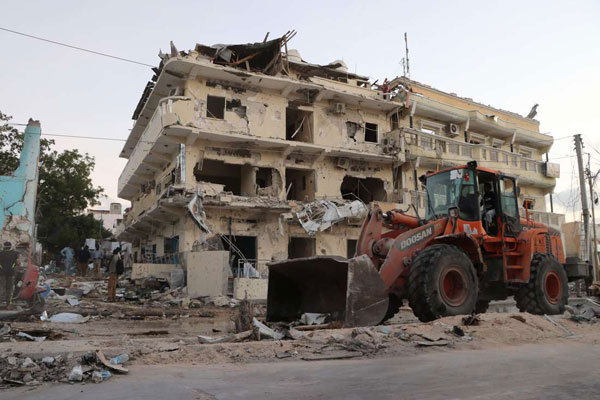 A backhoe loader cleans the street outside the Maka Al-Mukarama hotel in Mogadishu, Somalia on March 1, 2019 after a car bomb exploded. The FBI said it learned this year that Mostafa has taken on a leadership role in al-Shabaab’s explosives department. FILE PHOTO | ABDIRAZAK HUSSEIN FARAH | AFP

The US State Department is offering a $5 million (about Sh508 million) reward for information on the whereabouts of an American citizen said to be a leader of al-Shabaab’s bomb-making operations.

Renewed attention to the reward, first posted in 2013, came as prosecutors in California unsealed on Monday a previously secret set of criminal charges against Jehad Serwan Mostafa, a 37-year-old US native described as a long-time leading figure in al-Shabaab.

“We believe this defendant is the highest-ranking US citizen fighting overseas with a terrorist organisation,” said Robert Brewer, the top federal prosecutor in southern California.

“Today we seek the public’s assistance in capturing Mostafa and disrupting Al-Shabaab.”

Special FBI Agent Scott Brunner specifically called for the assistance of East Africans in locating Mostafa, who is believed to be based in southern Somalia.

Mostafa, who is on the FBI’s Most Wanted Terrorist list, was raised in San Diego and attended high school and college in southern California.

He left San Diego in 2005 and traveled first to Yemen and then to Somalia where he took part in fighting against Ethiopian troops, Mr Brunner recounted.

Mostafa has been involved with Shabaab as a media specialist, a trainer of recruits and a participant in attacks on African Union soldiers and Somali government forces.

The FBI said it learned this year that Mostafa has taken on a leadership role in al-Shabaab’s explosives department.

“He has been working to improve the effectiveness of improvised explosive devices and has used IEDs as “a tool of terror,” US authorities stated.

If convicted of the charges pending in a federal court in California, Mostafa could be sentenced to 55 years in prison and be required to pay $750,000 (about Sh76 million) in fines.