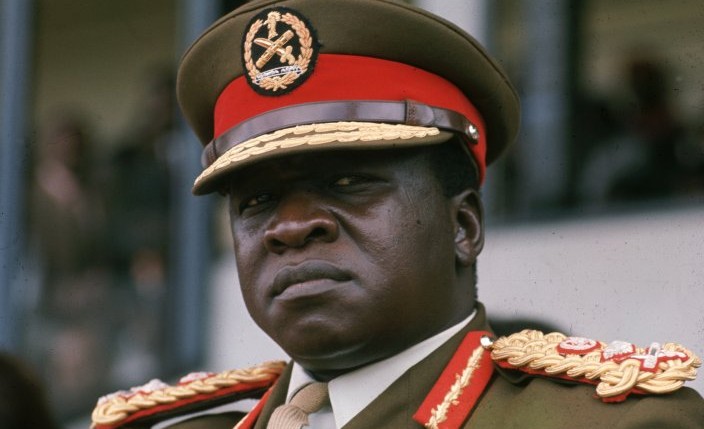 Ugandan president Idi Amin Dada was a violent dictator whose regime was responsible for some of the worst atrocities in his country’s history. Find out more about his brutal reign

In 1971, General Idi Amin overthrew the elected government of Milton Obote and declared himself president of Uganda, launching a ruthless eight-year regime in which an estimated 300,000 civilians were massacred. His expulsion of all Indian and Pakistani citizens in 1972—along with increasing military expenditures—brought about the country’s economic decline, the impact of which lasted decades. In 1979 his reign of terror came to an end as Ugandan exiles and Tanzanians took control of the capital of Kampala, forcing Amin to flee. Never brought to justice for his heinous crimes, Amin lived out the remainder of his life in Saudi Arabia.

Idi Amin Dada (c. 1925 — 16 August 2003) was the third president of Uganda, from 1971 to 1979. Amin joined the British colonial regiment, the King’s African Rifles in 1946, serving in Somalia, Kenya and Uganda. Eventually, Amin held the rank of major general in the post-colonial Ugandan Army and became its commander before seizing power in the military coup of January 1971, deposing Milton Obote. He later promoted himself to field marshal while he was the head of state.

Amin’s rule was characterised by human rights abuse, political repression, ethnic persecution, extrajudicial killings, nepotism, corruption, and gross economic mismanagement. The number of people killed as a result of his regime is estimated by international observers and human rights groups to range from 100,000[1] to 500,000.[2]

During his years in power, Amin shifted in allegiance from being a pro-Western ruler enjoying considerable Israeli support to being backed by Libya’s Muammar Gaddafi, the Soviet Union, and East Germany.[3][4][5] In 1975, Amin became the chairman of the Organisation of African Unity (OAU), a Pan-Africanist group designed to promote solidarity of the African states.[6] During the 1977–1979 period, Uganda was a member of the United Nations Commission on Human Rights.[7] In 1977, when Britain broke diplomatic relations with Uganda, Amin declared he had defeated the British and added “CBE”, for “Conqueror of the British Empire”, to his title. Radio Uganda then announced his entire title: “his Excellency President for Life, Field Marshal Alhaji Dr. Idi Amin Dada, VC, DSO, MC, CBE”.[2]

Dissent within Uganda and Amin’s attempt to annex the Kagera province of Tanzania in 1978 led to the Uganda–Tanzania War and the demise of his eight-year regime, leading Amin to flee into exile to Libya and Saudi Arabia, where he lived until his death on 16 August 2003.

Share thisFacebookTwitterPinterestEmailWhatsAppFact And Things You Don’t Know About Uganda’s Former Dictator, General Idi Amin Ugandan president Idi Amin Dada was a violent dictator whose regime was responsible for some of the worst atrocities in his country’s history. Find out more about his brutal reign In 1971, General Idi Amin overthrew the elected government of Milton