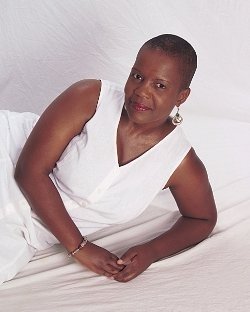 The journalist and former US Air Force Reserve officer arrives in Nairobi from Los Angeles on February 22.

Announcing the visit on her blog last week, Akinyi said she was excited to meet her father for the “first time in memory”.

Mr Ochieng on Friday said he was thrilled by his daughter’s visit as he had not seen her since she was a baby, 54 years ago.

And their parallels are many. Akinyi, like Obama, was born in August 1961, their fathers are (were) Kenyan and Luo and their mothers were American.

Akinyi and Obama’s parents also met when they were both attending the same American colleges – University of Hawaai for the Obamas and Roosevelt University in Chicago for the Ochiengs.

“My parents divorced when I was very young; afterwards, my father returned to Kenya. For half of my childhood, I was raised by older relatives of my mother,” says Akinyi, a statement that could as well be coming out of Obama’s mouth.

Like Obama Senior, who returned to Kenya when the current US president was a baby, Philip Ochieng also left America for his homeland, leaving an infant Akinyi, who did not hear from him until the Internet Age when, at age 35, she went searching for him online.

The discovery of a father who is “a famous journalist in the entire African continent”, for Akinyi was also a discovery of the huge ideological gulf that matched the distance and time that had separated them.

Akinyi and her father have not spoken to each other during most of Barack Obama’s presidency because of their differences in political persuasion.

“Yes, it’s about my opposition to that presidency, to that person,” she says.

Commenting on Akinyi’s well-known anti-Obama politics, Mr Ochieng said he had no problem at all with her leanings. “She is now with the Republicans, but I cannot expect her to be like me.”

Yet politics is not the only point of divergence between father and daughter. Akinyi, also an author, concurs with her fathers’ legion critics who believe that Ochieng is often unduly difficult to read.

She was concerned after she noticed many letters to the editor in the Nation from readers complaining that they had to reach for a dictionary every time they read his columns.

Akinyi advises her father to tone down.

“The best of written communicators strike a balance between high-quality language and being mindful of whether his or her audience will care enough to want to pull out a dictionary every time they encounter his or her by-line,” she explains.

But Mr Ochieng has remained adamant. “It is not my job to come down to your level. It is your job to rise to my level,” he insists.

It will be an interesting encounter between father and daughter, but particularly for the lady.

Unlike Barack Obama who first visited Kenya in search of his roots in 1987, five years after his father died in a road crash; Akinyi is coming nearly 30 years after him, to a father who to some is a living legend, to others an obstinate mere mortal and to her, an idea that is not much more than a biological source of her life.

When Akinyi first made contact with her father in 1997, he was elated. “She did a good thing to look for me even though I had abandoned her. I am also happy with her because she keeps my name. American women, when they remarry, force their children to take on their next husband’s name,” Ochieng’s biographer, Liz Gitonga Wanjohi writes in The 5th Columnist: A Legendary Journalist.

So how is he preparing for this historic reunion? “She will find us as we are. We might take her to Awendo (his rural home). It all depends on how much time she has,” Ochieng spoke to Saturday Nation on phone from his Ong’ata Rongai home outside Nairobi.

Akinyi, a language expert, will be in Kenya for a week. Her coming has in a way exposed the truth in Ochieng’s self-description as an “entrepreneurial idiot,” who did not make a fortune from his decades in journalism, most of them at the helm.

Just to be sure, Akinyi is appealing for donations to help make her trip successful. “While the trip and the lodging are already paid for by my generous friend, I will have to pay for my meals,” she wrote in a post ‘why I am ‘begging’ for my Kenyan trip’.

“My brother has assured me that he can get me from Nairobi to our ancestral village, but I don’t want to leave that to chance, especially since their mother – my father’s present wife – is very ill and they have many medical bills to pay.”

Mr Ochieng’s wife, Jennifer Dawa, has been battling multiple strokes for some time now and a number of fund drives have been held to offset her bills.

One of independent Kenya’s most notable, if enigmatic figures, Ochieng has been vilified and celebrated in equal measure.

The former for being the intellectual prop of Kanu in its darkest days as editor of its mouthpiece Kenya Times; the latter for being a brilliant wordsmith and a key contributor in building Kenya’s media to be what it is – one of the freest and strongest on the continent.

Perhaps to assuage his guilty conscience for throwing his daughter into an identity crisis, Mr Ochieng wrote in 2008 that Barack Obama Junior’s book Dreams from my Father reminded him of the agony that has been oppressing Akinyi’s mind.

“The only consolation, if it is one, is that all Black people – no matter where they are – live in two worlds, and therefore, have an identity crisis,” he wrote in the regional weekly The EastAfrican.

Will this ultimate reunion between father and daughter close the ideological chasm and the time and space that have separated them?