Eyes on EACC as Britain hands over ‘Chickengate’ files 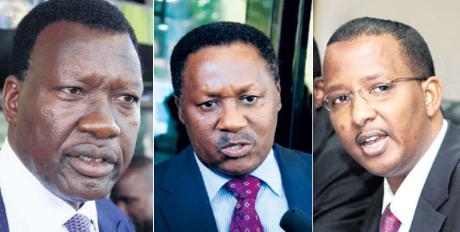 Eyes on EACC as Britain hands over ‘Chickengate’ files

The United Kingdom’s Serious Fraud Office (SFO) has handed over to Nairobi official documents detailing the systematic bribery of Kenyan electoral and examination officials in a move that now places the matter squarely on the doorsteps of Kenya’s anti-corruption agency.

The SFO delivered the “Chickengate” dossier to Attorney- General Githu Muigai two weeks ago, according to sources at the State Law Office and the files have since been passed on to the Ethics and Anti-Corruption Commission (EACC), which has been accused of dragging its feet in bringing to justice public officials involved in the scam.

“The EACC now has all the necessary materials to pursue the case and nail the suspects mentioned. They do not have an excuse anymore,” said our source, who cannot be named because he does not speak for the AG’s office, adding that the files were received through diplomatic mail.

The dossier includes all the evidence that SFO used to prosecute and jail directors of British printing firm Smith & Ouzman after they were convicted of paying out hefty bribes codenamed  ‘chicken’ totaling Sh51 million to Kenyan electoral and examination officials.

Diplomatic bags are not subject to custom laws and cannot be opened by third parties, hence are used as a secure channel for the transmission of official communication between nations, as provided for in the 1961 Vienna Convention on Diplomatic Relations.

The Attorney–General’s office has a mutual legal assistance department which officially requested British authorities to share the evidence used to successfully indict Smith & Ouzman and its two directors, Christopher Smith and his son Nicholas.

The handing over of the ‘chickengate’ evidence to EACC now paves the way for criminal prosecution against the IEBC and Knec officials who ate the ‘chicken.’

A cloud of doubt, however, remains over the EACC’s commitment to pursue the Kenyan suspects in the case given the slow pace its investigations have moved since the UK prosecutors opened their case against British suspects.

READ: EACC has little to show on ‘chickengate’ scandal as UK goes after briber’s assets

SFO detectives retrieved damning e-mail exchanges between S&O and Kenyan electoral officials, shipping invoices and local purchase orders (LPOs) used by the procuring entities, to put a solid case of corruption that led to imprisonment of the S&O officials and confiscation of the company’s assets.

The SFO’s documents show that Kenyan electoral officials inflated the price of each of the 14.51 million ballot papers ordered for the 2010 referendum at the rate of Sh0.75 per ballot paper, translating to kickbacks totalling £105,193.82 (Sh14.8 million).

EACC chairman Philip Kinisu concurred that there were concerns over the agency’s handling of the ‘Chickengate’ affair and ordered chief executive Halakhe Waqo to publicly issue a statement on the matter.

“This is a public interest matter,” Mr Kinisu said on Tuesday in an interview with Business Daily. “I’ll ask the CEO to put out information on the status of the investigations,” said the former PricewaterhouseCoopers executive who was sworn into office on January 18, 2016.

EACC is yet to complete investigations and charge any of the top officials named in the scandal, yet London a year ago jailed those who paid out the bribes and last month seized the assets of Smith & Ouzman Ltd and its directors.

More recently, Director of Public Prosecutions (DPP) Keriako Tobiko has also shifted blame to EACC, insisting that his mandate does not include “investigating criminal cases” as that is a function of the anti-graft agency.

Law Society of Kenya (LSK) chairman Eric Mutua described the EACC as the weakest link in the quest to prosecute the Chickengate scandal, saying the conviction in London gives the agency a solid case against the locals co-conspirators.

“The blame is squarely on EACC. There is no goodwill on the part of EACC,” said Mr Mutua, adding that conviction in London of the Britons means the Kenyans named in the court documents received the bribes.

“There is no way they would have been jailed without evidence,” said the lawyer.

Top on the list of those adversely named in the SFO’s Chickengate files are Independent Electoral and Boundaries Commission chairman Issack Hassan, former Energy secretary Davis Chirchir (who is a former commissioner at IIEC) and former Knec boss Paul Wasanga.

London’s Southwark Crown Court on January 8, 2016 seized the assets of Smith & Ouzman Ltd and ordered the British printer to pay a total of £2.39 million (Sh351 million) in fines and penalties for paying out bribes.

Court papers show that the bribery payments were made through Trevy James Oyombra, the S&O Kenyan agent, who would in turn discreetly pass on the ‘chicken’ to IIEC and Knec officials.

Judge Daniel Pearce-Higgins had in February last year sentenced Nicholas Smith to three years in jail while his father, 72-year old Christopher Smith, was handed a suspended jail term of 18 months and 250 hours of community service.

The UK’s Bribery Act (2010) outlaws use of bribes by both persons and corporations to influence decisions, win or retain business abroad.

John Githongo, a former anti-graft czar, faulted the EACC’s poor progress on investigating ‘Chickengate’ despite President Uhuru Kenyatta’s announcements that his government is committed to rooting out corruption.

“Chickengate has exposed the so-called anti-corruption fight for the charade it has been,” he said.

“The political will to make EACC work doesn’t exist I’m afraid. It never did. It’s merely hot air from State House,” said Mr Githongo who served as PS for Governance and Ethics between 2003 and 2006 before he fled to the UK fearing for his life.

Opposition chief Raila Odinga said IEBC has a “serious credibility issue” based on the chicken bribery affair and called on EACC to pursue those named and to recover the funds lost in the inflated bills.

Smith & Ouzman, founded in 1845, has an estimated annual revenue of Sh1 billion ($10 million) from its specialised printing business of security documents such as examination and ballot papers.

S&O lists some of its top customers in Kenya as IEBC, Knec and other government agencies.