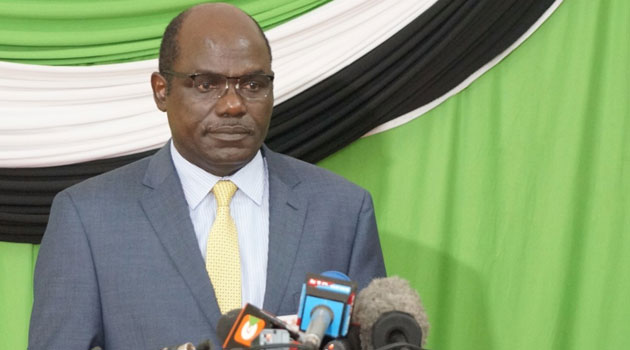 Peter Gichira who is a former Presidential candidate contends that Chebukati grossly violated Article 47 of the Constitution by refusing, in his capacity as the Returning Officer of the 8th August, 2017 Presidential Election, to allow him to submit his list of nomination signatures/FILE

A petitioner is now seeking to oust the Independent Electoral and Boundaries Commission Wafula Chebukati through Parliament accusing him of violating the Constitution.

In his petition, Peter Gichira who is a former Presidential candidate contends that Chebukati grossly violated Article 47 of the Constitution by refusing, in his capacity as the Returning Officer of the 8th August, 2017 Presidential Election, to allow him to submit his list of nomination signatures.

He state that the Chairperson further rejected his documents and failed to give him reasons for the same.

“The Chairperson rejected the Petitioner’s documents and failed to give him reasons for the same. The High Court in Judicial Review Case No. 273 of 2017 expressly found that the IEBC had treated the Petitioner unfairly. Article 47 of the Constitution guarantees Kenyans’ fair administrative action by providing that every person has the right to administrative action that is expeditious, efficient, lawful, reasonable and procedurally fair,” he said.

He stated that if a right or fundamental freedom of a person has been or is likely to be adversely affected by administrative action, the person has the right to be given written reasons for the action.

“That Section 10 of the Leadership and Integrity Act, 2012 requires the Chairperson, as a State Officer, to report truthfully on all matters of the Commission. However, and as previously mentioned in this Petition, the Chairperson lied to the High Court under oath,” he stated.

He pointed out that Chebukati further deliberately and wilfully misled the Court and gave information he knew was false, all designed to lock out the Petitioner from the presidential race and deny him his Constitutional right to vie for a political post of his choice.

“That the Chairperson’s acts of omission and commission as enumerated above are in further violation of Section 13 of the Leadership and Integrity Act, 2012 which sets out the moral and ethical requirements State officers are expected to observe and maintain,” he said.

He explained that a State officer, for instance, is required to accurately and honestly represent information to the public and demonstrate honesty in the conduct of public affairs and that Chebukati had met neither of those two requirements.

“That, in conclusion, the matters raised in this Petition are grave as they question the integrity of the Chairperson of one of the most important commissions in the land. He is supposed to be above board in the performance of his duties. These matters should therefore be examined exhaustively.”

He argued that Chebukati was also in gross violation of the Leadership and Integrity Act, 2012, which was enacted to give effect to Chapter Six of the Constitution.

The petition came even as Human Rights Activist Okiya Omtatah filed a petition to protect Chebukati from being fired.

Ex-presidential candidate Gichira petitions Parliament to remove Chebukati from office Reviewed by samrack on May 1, 2018 .