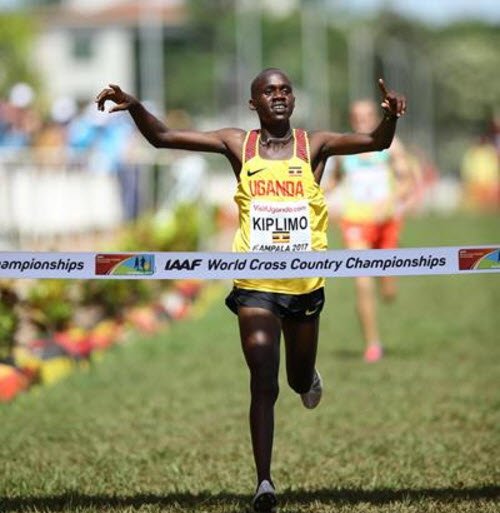 Letesenbet Gidey created a piece of history when she became only the fourth woman ever to win the World Under20 Cross Country title twice, leading Ethiopia to a 1-2 finish as Kenya’s Cellphine Chepsol came third in Kampala, Uganda.

In the corresponding men’s race, World U20 10,000m bronze medallist Jacob Kiplimo of Uganda gave the hosts a golden cheer when tore the Kololo Independence Grounds apart to finish ahead of Ethiopia’s Amdework Walelegn and Kenya’s Richard Kimunyan Yator .

In winning the race, Kiplimo gave Uganda its first ever gold medal in World Cross history.

The world U20 10,000m bronze medallist last year, Kiplimo came into the race as the host country’s best chance of an individual medal following his brilliant performance which saw him win the Ugandan Cross Country Championships on this same course.

Kiplimo covered the 8km course in 22:40, ending the Kenyan and Ethiopian dominance in the event to win the first global title of his career.

From the gun, Eritrean Yemane Haileselassie produced a fast start, working himself to the head of the leading pack which was composed of Ugandan Victor Kiplangat, Kenyans Wesley Ledama, Edwin Kiplangat Bett and Amos Kirui and Ethiopian Solomon Berihu with Kiplimo following suit.

At the end of the first lap, Haileselassie, the Eritrean record holder in the steeplechase and 2016 World U20 silver medallist in the event, was at the front of a tightly wound 10-man pack.

The fastest entrant at the 2016 IAAF World U20 Championships where he won silver in a personal best of 8:22.67 led through the first lap alongside Ethiopian Solomon Berihu and the entire Kenyan squad.

In the second lap, Kenyan Richard Yator Kimunyan, the World U18 5000m champion two years ago, overtook the pack briefly, taking turns up front with Kiplimo and Ledama. Berihu and Kirui also remained in contact.

Unconcerned about the hot conditions at the Kololo Grounds, and backed by his vociferous home fans, Kiplimo broke away from Kirui and Kiplangat going into the final lap, sending the crowd into a further frenzy.

As he powered on, Amdework Walelegn, who finished fourth in the 10,000m at last year’s World U20 Championships, tried to save the day for Ethiopia, pushing hard to close the gap. He moved past Kirui and Kiplangat with Kiplimo his next target, but the attack bearned no fruit as the Ugandan continued to hold his advantage.

Kiplimo went on to cross the finish line in 22:40 with Walelegn three seconds behind to bag silver. Kimunyan joined the podium finishers nine seconds further back.

Upon crossing the finish line, Kiplimo who was congratulated by Uganda’s President Yoweri Kaguta Museveni said, “Yes yes yes, I always thought I could win. It was a very good race. When I decided to break away going into the last lap, I knew I was going to win.”

“I am happy but not satisfied with second spot,” said Walelegn. “The crowd made it very difficult for me to run according to my plan.”

Walelegn did however lead Ethiopia to the men’s U20 title with 17 points, their second since 2013. Kenya was one point behind to take team silver. Eritrea was a distant third with 55, just one point better than Uganda, who was fourth.

The 19-year-old Gidey won gold in Kampala much the same way she clinched her first title on her debut two years ago in Guiyang, China, only this time she couldn’t lead an Ethiopian podium sweep.

As temperatures rose in the Ugandan capital on Sunday afternoon, 108 athletes set off in the six-kilometre contest. The group featured a mix of international competition debutants and those who were winding up their age-group careers.

Former world cross country champion Lorna Kiplagat had described the Kololo Independence Grounds course as one which would give each athlete a chance, but it was still the Kenyans and Ethiopians who set the early pace. The rains, which had been predicted, stayed away much to the relief of the athletes and fans who turned up to watch the country host its first international athletics event.

At the two-kilometre mark the race was stretched out to a leading pack of 10 athletes, six Kenyans and four Ethiopians. Defending champion Gidey tucked in within the group, which also had U18 and U20 steeplechase world champion Celliphine Chepsol of Kenya.

With no international competition experience Kenya’s Hellen Lobun hung on to the lead on the winding course with Chepsol and Gidey as the rest dropped off the pace.  Like she did in 2015, Gidey matched the two Kenyans stride for stride as she bid her time to make a move.

The Ethiopian national cross country champion injected a burst of pace almost 500 metres into the final two-kilometre loop and raced on to win her second major international U20 title.

“The course was somehow challenging because of the grown grass and many barriers but am delighted with the victory,” Gidey said.

Hawi Feysa who was third in the Ethiopian nationals worked her way back up the field to win silver while Chespol came home in bronze medal position and Lobun wound up a distant fifth.

In a top 10 dominated by Ethiopians and Kenyans, Uganda’s Peruth Chemutai, a 2016 Olympian in the steeplechase stood out after finishing seventh. The first non-African finisher was Japan’s Tomomi Takamatsu in 15th place.

Gidey now joins compatriot Genzebe Dibaba (2008 and 2009) and Kenyans Viola Kibiwott (2001 and 2002) and Faith Kipyegon (2011 and 2013) as an athlete to have successfully defended an U20 female cross country title. The 5000m runner hopes this can be a launching pad to a successful senior career.

“I want to compete at the world championships in London later this year and this performance gives me great motivation,” she explained.

Gidey’s past track experience hasn’t produced much success: at the 2015 world U18 championships she finished just outside the medal bracket in Cali, Colombia, but at 19 years she still has time to work on it.

Ethiopia beat Kenya to the team title by one point after scoring 19 to take the gold. Uganda’s 62 points was enough for the bronze medal, the country’s second team medal in the category. They first won bronze in 2010.

There was a pile up at the finish line of the race as athletes collapsed due to exhaustion. Australia’s Georgia Evans attributed it to the rising temperatures saying, “Its very hot and the hills on the course put a lot of lactic in the legs and so everyone lost a lot of water generally.”