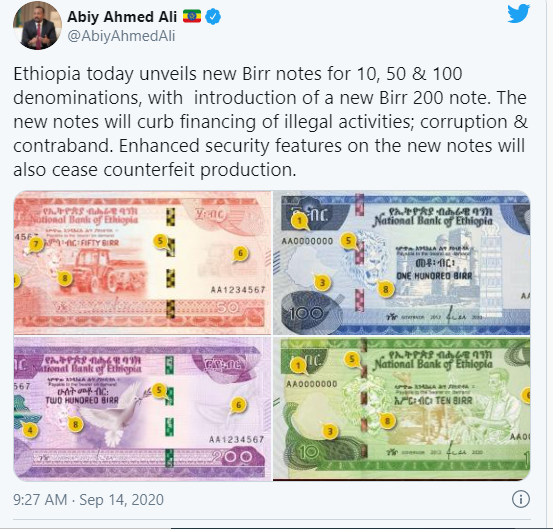 The Ethiopian government has unveiled a set of new bank notes as a part of its efforts to curb cash hoarding, illegal trade activities, and illicit financial flows in an already struggling economy.

Prime minister Abiy Ahmed disclosed the notes with denominations of five, 10, and 100 are changed, and a new 200 birr (~$5.50) note is being introduced. Over 3.6 billion Ethiopian birr ($97 million) is being spent to print the new currencies. Ordinary Ethiopians have just three months to replace their old notes.

“Money outside the banking system has been rising, affecting the liquidity of commercial banks. This is in addition to its impact on bolstering illegal trade activities”, said Abiy in a statement.

Local banks have long called for a change in currency via Ethiopia’s Bankers Association noting that over 113 billion Ethiopian birr lives outside of the formal banking system exacerbating the liquidity problems commercial banks have faced this year.

“Even though changing currency is costly and expensive, it is very important to the economy,” says Wasihun Belay, a development economist based in Addis Ababa. “Especially with the inflationary pressure haunting the country for long and its adverse impact on purchasing power, introducing new denomination is a step in a right direction and, in addition, 500 and 1000 notes should also be introduced,” he says.

Although demonetization is an economic strategy used from time to time in developing countries to stabilize the currency and ease inflation it is not without its risks. Economists often warn if mishandled it could trigger market chaos and uncertainty as citizens scramble to swap their notes.

Ethiopia last introduced a new denomination at the end of the Ethiopian-Eritrean deadly civil war two decades ago.

The government has in recent years been forced to print currencies to finance its budget deficit only sustained by foreign lenders. Broad money supply has been increasing by 20% annually according to the National Bank of Ethiopia over the last 15 years and skyrocketed from 104.4 billion Ethiopian birr to almost 1 trillion birr this year.

Although this has helped the economy grow by raising the contribution of the state through massive infrastructural investments, it has resulted in an increase in cost of living. Last month, inflation rate topped 20%. Like most developing economies, Ethiopia has been harshly hit by the pandemic. After several years of rapid growth the World Bank and IMF have had to downgrade their forecasts annual growth of 3.2% down from 7.2%.  In May, the country’s debt was downgraded to B2 from B1 after it stated its intention to take part in the G20’s Debt Service Suspension Initiative designed to help low income countries focus on healthcare for their citizens.

Most transactions in Ethiopia are still cash-based as the informal sector has a substantial share in the economy. To get round this, the National Bank introduced a cash withdrawal and limits on withdrawal as of last month.

Share thisFacebookTwitterPinterestEmailWhatsAppEthiopia Emulates Kenya, Launches new currency The Ethiopian government has unveiled a set of new bank notes as a part of its efforts to curb cash hoarding, illegal trade activities, and illicit financial flows in an already struggling economy. Prime minister Abiy Ahmed disclosed the notes with denominations of five, 10, and 100 are