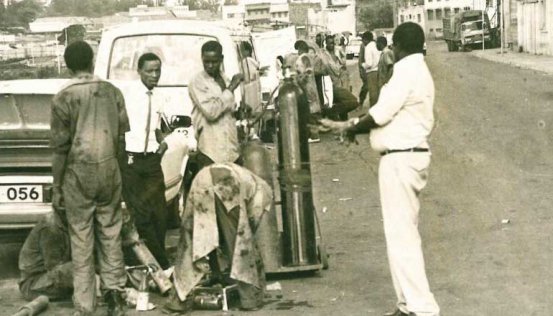 Kirinyaga Road. If you are looking for mechanics of all shades and with all sorts of deals regarding spare parts then that is the road you take.

Spare shops line up both stretches of Kirinyaga Road with the outlaying open air field serving as the ‘office’ of experts in wiring, chassis repairers, tinting guys, panel beaters, peddlers of air-con gas.

With one look at a car spare part, the arm chair ‘broker’ mechanics of Kirinyaga Road can tell which make of vehicle you own and what’s wrong with it.

Then there are the kalasingas who specialise in crankshaft grinding having taken their engineering prowess from Punjab in India to Kenya. Kala Singh came to Nairobi in the 1890s to start a hardware shop and along the way, his name was corrupted to kalasinga to denote all Sikhs!

The backstreet of Kirinyaga Road will provide one for less than Sh1,000. Your wipers have been stolen? Worry not, you might just buy them back along what was once Grogan Road, and which a ‘certain community’ from Central Kenya mispronounced as ‘Girogoni.’

Indeed, in 1964, Attorney General Charles Njonjo tabled the Motor Vehicles Components and Accessories Bill in Parliament that sought to outlaw open air garages, and have all spare part shops closed after six O’clock chiefly because Kirinyaga Road was spurring car theft in the city.

The Bill did not pass after four months of waheshimiwas foaming at the mouth.

See also: Did you know that FGM got politicians ‘begging’ for votes ndani ya kanisa

The Bill among other absurd suggestions outlawed the modification of any spare parts without permission from the Superintendent of Police, huh!
Attempts to evict them from their ‘Spare Parts District’ has been met with violent resistance over the years.

But how did mechanics and spare parts shops colonise this part of Nairobi?

The War ended in 1945 and with it, 44,500 Kenyans dead, and while White soldiers were rewarded with 20 acre parcels of land in Karen and the ‘carrier corps’ paid their dues in the area that would later be known as ‘Kariokor’ the colonial government did not let go of the mechanics that repaired vehicles during the War.

It simply dumped them along Grogan Road, now Kirinyaga Road, where mechanics and spare part shops operate like cheek by jowl lovers!

Did you know how Nairobi’s Kirinyaga road became spare parts District? Reviewed by samrack on November 24, 2016 .

Share thisFacebookTwitterPinterestEmailWhatsAppKirinyaga road jua kali mechanics, 1989. Photo: Courtesy Did you know how Nairobi’s Kirinyaga road became spare parts District? Kirinyaga Road. If you are looking for mechanics of all shades and with all sorts of deals regarding spare parts then that is the road you take. Spare shops line up both stretches of Kirinyaga