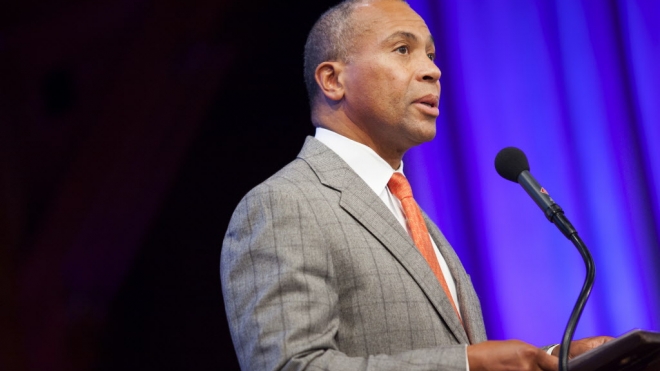 Deval L. Patrick ’78, J.D. ’82, who recently concluded two terms as the 71st governor of the Commonwealth of Massachusetts, will be the principal speaker at the Afternoon Exercises of Harvard’s 364th Commencement on May 28.

“Deval Patrick is an extraordinarily distinguished alumnus, a deeply dedicated public servant, and an inspiring embodiment of the American dream,” said President Drew Faust. “We greatly look forward to welcoming him home to Harvard on Commencement Day.”

Raised on Chicago’s South Side, Patrick came to Massachusetts at age 14, having won a scholarship to Milton Academy through the Boston-based organization A Better Chance. He earned admission to Harvard College, as the first in his family to attend college, and spent a year in Africa after graduation on a Rockefeller Fellowship before studying for his law degree at Harvard Law School, where he was president of the Harvard Legal Aid Bureau.

Early in his career, he served as a law clerk on the U.S. Court of Appeals for the Ninth Circuit in Los Angeles, as a staff attorney at the NAACP Legal Defense and Education Fund working on voting rights and death-penalty cases, and then as a partner at the Boston law firm Hill & Barlow.

In 1994, President Bill Clinton named him assistant attorney general for civil rights, the nation’s top civil rights post. In that role, he led the Justice Department’s efforts in such areas as prosecuting hate crimes and enforcing laws on employment discrimination, fair lending, and rights for the disabled.

He went on to become the first chair of Texaco’s Equality and Fairness Task Force, and later served as a senior executive at Texaco and then at the Coca-Cola Co.

Against long odds, he mounted a broad-based grassroots campaign that led to his election as governor of Massachusetts in 2006. He took his oath of office with his hand on the Mende Bible, presented to John Quincy Adams by freed Africans from the slave ship Amistad.

Consistent with his emphasis on generational responsibility, Patrick’s leadership as governor featured strong support for Massachusetts public education at all levels and the vigorous growth of the life sciences, clean technology, and digital technology industries, collaborating with government, universities, and the private sector. In addition to guiding Massachusetts through the global financial crisis of 2008-09 and its aftermath, he pursued a wide range of priorities in such areas as economic opportunity, affordable health care, public infrastructure, government reform, veterans’ services, and marriage equality. During his tenure, Massachusetts led the nation on these and other fronts. He also brought a steady hand to a range of crises, from natural disasters to the Boston Marathon bombings.

“It’s an honor to have Governor Patrick return to campus to share his life experience with the newest members of the Harvard Alumni Association,” said Cynthia Torres ’80, M.B.A. ’84, president of the alumni association. “From his youth on the tough streets of Chicago’s South Side, he went on to attend Harvard College and Harvard Law School, and was twice elected to the highest office in our nation’s oldest commonwealth. His distinguished career continues a longstanding tradition of Harvard alumni in public leadership.We look forward to hearing him share his insights with our graduates, alumni, and friends.”

Patrick will speak during the afternoon exercises at the annual meeting of the Harvard Alumni Association, held in Harvard Yard’s Tercentenary Theatre between Widener Library and the Memorial Church.

Share thisFacebookTwitterPinterestEmailWhatsApp  Deval Patrick Named Harvard Commencement Speaker Former Massachusetts governor will address Afternoon Exercises in May Deval L. Patrick ’78, J.D. ’82, who recently concluded two terms as the 71st governor of the Commonwealth of Massachusetts, will be the principal speaker at the Afternoon Exercises of Harvard’s 364th Commencement on May 28. “Deval Patrick