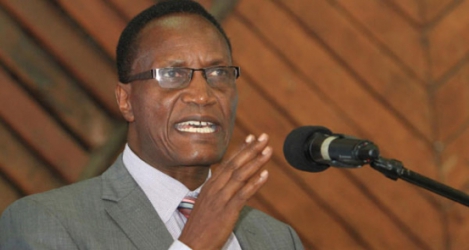 Kenya: There was tremendous improvement in results for 2014 Kenya Certificate of Secondary Education (KCSE), Education Cabinet Secretary Jacob Kaimenyi has said. Kaimenyi released the results Tuesday morning at Mitihani house in Nairobi. The Education Cabinet Secretary said 3, 073 (0.63%) candidates scored a mean of A plain in 2014 compared to 2, 722 (0.61%) in 2013. 149, 717 candidates attained C+ and above which is a minimum grade for university entry. This represents 30.8 percent compared to 27.5 per cent in 2013.

“Am delighted to announce that general performance improved tremendously in 2014 KCSE examinations compared to 2013”, an elated CS said. Over 450, 000 candidates sat for the examination in 2013. In terms of gender, 88, 299 male candidates attained an overall mean grade of C+ and above which represents 59 per cent  while female candidates who got a C+ and above stood at 61, 418 which represents 41 per cent. Male candidates outperformed female candidates with 69.4% of males attaining mean grade of A plain compared to female candidates who are at 30.6%. See also: D-Day as 450,000 candidates await KCSE results 15 out of 31 subjects examined recorded improvement compared to 14 out of 31 in 2013. Female candidates outshined male candidates in five subjects namely; English, Kiswahili, Christian Religious Education (CRE), Home Science and Art and Design. 1, 090 students with Special Needs Education (SNE) sat the 2014 KCSE exam in which 180 of the candidates managed to attain a mean grade of C+ and above. Five SNE candidates scored a mean grade of A plain while 14 got A minus. The Education CS attributed the results to government’s efforts in tailoring education curriculum to meet the needs of students with special needs. He further announced an increase in number of special needs candidates attaining full circle education saying government’s effort towards inclusive education is bearing fruits. “Kenya is among few countries in Africa who have tailored their education curriculum to meet the needs of students with disabilities. This tailored curriculum has led to the achievement of inclusive education in our schools”, Kaimenyi said. Five national schools were involved in exam irregularities despite admitting top students. Taita-Taveta and Lamu counties reported zero cases of cheating.

Garissa and Mandera counties recorded highest in gender disparity in 2014 KCSE exam.  In Garissa, 72 % of the candidates were boys and girls were at 28 % boys while Mandera was at 71 % for male and 29 % females. Kaimenyi decried an increase in under age candidates which stood at 1.9% compared to 1.3 % in 2013. The candidates are the first beneficiaries of Free Primary Education, which was introduced in 2003 when they enrolled in Standard One and joined Form one in 2011. See also: D-Day as 450,000 candidates await KCSE results The cabinet secretary said dropout rate in secondary education remains a challenge. 521, 621 candidates were admitted to secondary schools in 2011 while 483, 630 candidates sat for KCSE examination in 2014. This represented an overall wastage of 7.85%. Factors cited for the high dropout rates include child labour, child abuse and retrogressive cultural practices eg Female Genital Mutilation. In addition, Kaimenyi sounded a warning alarm to head teachers, who are still withholding student certificates despite government’s directive last year, which ordered for the release of all withheld certificates. He said it is against KNEC Act to withhold the certificates and said those found culpable after investigation, will face a disciplinary measure as per provisions of the laws in Kenya. Earlier on, Education Principal Secretary Dr. Bellio Kipsang announced that the government had released funds for exam registration of candidates in public schools. Head teachers were also urged to adhere to fees structure guidelines issued by the government to ensure all Kenyans access education irrespective of their backgrounds.

In a bid to encourage students to enrol for technical courses, Kaimenyi said the government is revamping and equipping 60 technical training institutes in the 60 constituencies countrywide. Parents and students who sat for the 2014 KCSE exams can access the results by sending index number to 22252 or logging into KNEC website,