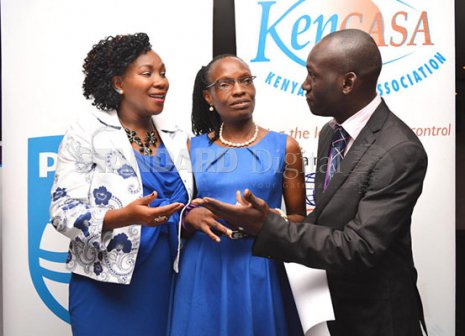 Did you know that the kind of cancer a person contracts sometimes depends on which tribe they come from? These are the surprising findings by a team of scientists who took time to study medical records of cancer patients in Nairobi going back 15 years. The combined team of six researchers from Kenya Medical Research Institute (Kemri), Britain’s Queen Mary University and Oxford University came to striking conclusions linking the occurrence of cancer in Nairobi to the tribal origin of afflicted people. The study found, for instance, that Luos and Kambas are more likely to be afflicted by cervical cancer than any other tribe living in Nairobi. Of the top eight killer cancers in Nairobi six of them were shown by the study to be concentrated in one or two communities, with breast tumours highest among whites and Asians. READ MORE Asbestos-roofed houses causing cancer in Kenya Heed Magufuli’s call on tribalism First Lady unveils initiative to fight cancer cases Cancers of the mouth and throat were most common among the Somali, the skin affliction called Kaposi Sarcoma highest among Luos and the tumour Burkitt Lymphoma largely affects Luhya children.

Stomach cancer in Nairobi was found to be most prevalent among the Kisii followed by the Kikuyu. And nose cancers, called nasopharyngeal tumours, occurred most among Nairobi residents originating from the highlands, such as the Kalenjin, Kikuyu and the Kisii. Previous studies have shown the incidence of nose cancers among the Kalenjin to be about twice that of any other ethnic group in the city. This distribution pattern of nose cancers has been attributed to the exposure of these communities to indoor wood smoke from heating fires. The researchers analysed data from the Nairobi Cancer Registry going back 15 years and were surprised that pre-migration exposures and lifestyles still dictate the kind of cancers dominant in the city.

The team examined records of 22,231 cases of cancer reported at the registry from 2000 to 2014. They found that the two main cancers in Nairobi, prostate, a significant killer of men in Kenya, and cancer of the rectum were evenly distributed among the different racial and ethnic groups. “We are fairly surprised,” says Mrs Ann Korir, the lead investigator and head of the Nairobi Cancer Registry at Kemri. She said they expected people living in the same city, who have intermarried and are exposed to comparable risk factors, to largely suffer the same type of cancers. “­This is not the case from our data with cancers in Nairobi being as varied as there are ethnic and racial groups,” said Mrs Korir in an interview. The type of cancers they found in Nairobi were confirmed to develop along ethnic and racial lines and seem to be influenced by factors beyond living in the city. READ MORE Asbestos-roofed houses causing cancer in Kenya Heed Magufuli’s call on tribalism First Lady unveils initiative to fight cancer cases For example, cancers of the mouth and throat were found to be prominent among both men and women of the Somali communities living in Nairobi, way above any other ethnic group in the city.

“We think this is mainly due to the cultural habit of Somalis chewing of khat and use of tobacco,” said Mrs Korir. The other groups found to develop significant throat and mouth cancers in Nairobi were the Kalenjin and Asians. Independent studies at the Moi Teaching and Referral Hospital, Eldoret, have previously associated the high rates of these cancers among the Kalenjin with consumption of the traditional fermented milk called ‘mursik.’ Burkitt Lymphoma, which was found to occur most among Luhya children, is a fast developing tumour, largely affecting the lower jaw in children. It also occurs more commonly among the Luo, both groups coming from the malaria zones of the lake region. “It is surprising to find that Luo and Luhya children resident in Nairobi retain such high risks of this cancer; characteristic of their home area,” says the study.

The cancer, which has been linked to endemic malaria exposure, is hardly significant in other ethnic groups in Nairobi. “It’s curious that cancer patterns described many years ago in different tribes and regions of Kenya seem to persist in the modern urban population,” says Mrs Korir. The study published in the International Journal of Cancer was carried out at the Nairobi Cancer Registry and targeted only residents of Nairobi going out of its way to exclude referral cases. The staff of Nairobi Cancer Registry visited all health facilities in the city involved in the diagnosis and management of cancer patients for registration. Death certificates of cancer patients who died in Nairobi were also used to identify cases. The main tribes included in this study were Kikuyu, Kamba, Kisii, Kalenjin, Luo, Luhya, Somalis, Asians, non-Kenyans, whites, other tribes and a group classified as unknown. Mrs Korir and her team argue that while long-ingrained cultural and lifestyle habits are the main risk factors to developing cancer, genetics have also a role to play. READ MORE Asbestos-roofed houses causing cancer in Kenya Heed Magufuli’s call on tribalism First Lady unveils initiative to fight cancer cases In the Nairobi study this was dramatised by the very high prevalence of skin cancers among Caucasian Kenyans. Many studies, locally and elsewhere have shown whites to be highly susceptible to skin cancer.

The study associates the high levels of breast cancer among the local white and Asian populations with a   uence. “Generally, whites and Asians in Nairobi are more affluent, which is consistent with wealth being a risk factor for breast cancer.” But with the pure Nairobi born and bred millennials now becoming a significant population in the city, Mrs Korir says cancer dynamics are bound to change in coming years. This generation, she forecasts, may possibly exhibit similar types of cancers influenced by lifestyle and exposure to the same risk factors and independent of their counties of origin. “This is where we now take our future research,” she said of investigations on whether traditional biases will disappear with time giving way to new cancer trends in the city.

“What emerges from our study is that no tribe in Kenya is immune to cancer with some appearing to be more susceptible to particular risk factors.” For example, says Mrs Korir, the Kamba in Nairobi are highly prone to the skin cancer called Kaposi Sarcoma for unexplained reasons. “We don’t know why but data points us in that direction. Maybe they get exposed to too much sunlight or whatever. This opens new research pathways,” says Mrs Korir.

Defining cancer by tribe Reviewed by samrack on November 20, 2016 .

Share thisFacebookTwitterPinterestEmailWhatsAppChairperson of the Kenya Cancer Association Ann Korir (left) share a light moment with Cancer survivor Sally Kwenda (centre) and Chairman of Relay For Life Kenya 2015 Jarim Omogi (right) during the official launch of Relay For Life Kenya 2015 in Nairobi. Photo by WILLIS AWANDU/STANDARD Defining cancer by tribe Did you know that