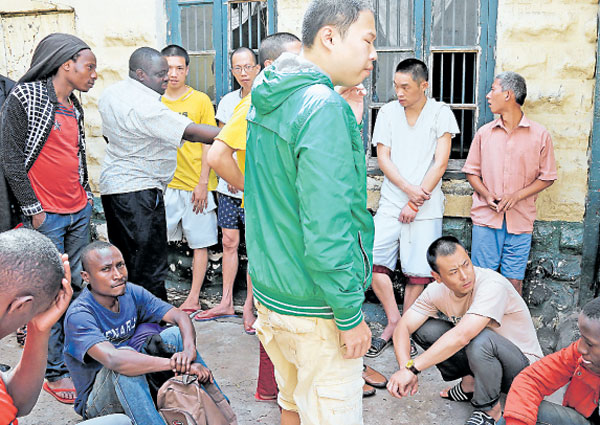 The most Luo Xongxu knew about Kenya before flying in from China was its diverse wildlife and massive infrastructure projects funded by Chinese money.

But, for the last 18 months, he has seen few animals and infrastructure except pesky insects and the walls of a century- old cramped windowless cell in Block L at Nairobi’s Industrial Area Remand Prison.

The 28-year-old is among 76 people from China and Taiwan who were arrested after fire broke out in a house in the city’s plush Runda estate in December 2014 and police discovered a network of telecommunications equipment, which raised suspicions about the activities that were taking place at the house.

Life has not been easy since the arrest, and he says he has fallen sick more times in the Kenyan remand prison than in his entire life.

“We are not used to the Kenyan weather and prison is not the best place to acclimatise. Most of us fall sick at least once every week,” he says through an interpreter.

The language barrier and “strange” food further enhance their sense of isolation.

“The mosquitoes are determined to keep you awake. Sio poa sana (it is not too comfortable). It is really difficult to communicate but we are learning kidogo (a little),” he says with a twist of the little sheng he has learnt to speak while in prison.

As they await their date with destiny, the Chinese remandees spend their days chatting and playing cards in between meals of ugali, githeri, rice, sukuma wiki, beans and occasionally meat like the rest of the inmates.

Last year, the Sunday Nation reported how some of them were said to be ordering special meals, and luxuries like cigarettes, but our recent visit found no sign of such extravagance.

Mr Luo left behind his wife and a one-year-old son in the Chinese city of Zigong, Sichuan Province, and came to Kenya in September 2014 with huge expectations.

His home city, known for its salt production, was once among the wealthiest in the country but its economy has become less vibrant over the years despite massive industrialisation of the Asian giant.

Perhaps that is why Mr Luo jumped at the opportunity to come to Kenya when he saw an advertisement on a pole asking for people willing to work in Africa.

“The flier said that on top of a $800 (Sh81,000) monthly salary, the job offer included airfare and accommodation,” he says.

Mr Luo studied machine automation after high school. But he could only secure work as a driver, cook and as a casual labourer earning $300 (Sh30,000) per month to support his young family.

On arrival, he claims a Kenyan driver picked him up and others in the group at the airport and took them to a house in Runda where they were to await further instructions.

They would be arrested two months later, setting off a chain of events that have created a diplomatic row between Kenya, China and Taiwan.

The 76 were charged with running a telecommunications system without a licence, conspiring to commit a felony and engaging in organised criminal activity.

If found guilty on June 6 when a ruling is expected to be issued, they could spend 15 years in prison.

Mr Luo’s account leaves lingering questions: Were some of those arrested victims of human trafficking?

Were all those found in the Runda house aware of the alleged illegal activities going on at the house or were some completely in the dark?

But while for legal reasons the Sunday Nation cannot examine the merits of their case as it is still in court, there is a possibility the Kenyan government could hand them over to waiting Chinese police who will ship them for trial in China if they are set free.

When the first batch of 40, which included 23 Taiwanese, went to Kilimani police station to collect their passports after their release, they were detained and taken to the airport, handcuffed and forced into a China Southern Airlines plane with hoods on their heads.

The Chinese Government in January had asked Kenya to hand over the 76 for trial in China saying they were part of a fraud ring targeting Chinese bank accounts who had stolen close to Sh1.5 billion but Kenya declined.

“The social impact of the crime is terribly serious and the Chinese Government and public paid high attention to this case,” Chinese Ambassador to Kenya Liu Xianfa wrote to the Foreign Affairs ministry in January 13.

He added: “The results of investigations indicate that all the victims (of the fraud) are in China. At the request of the Chinese victims, the Chinese police have formally filed these cases.”

Assistant Commissioner-General of Prisons David Macharia maintains the two countries do not have an agreement that would allow Kenya to transfer prisoners to China.

“For extradition to happen there has to be a memorandum of co-operation for inmates between the two countries,” he says.

This week CCTV, the Chinese state broadcaster, showed two Taiwanese deported from Kenya confessing to fraud while under police detention, implying that the remaining 28 men and nine women in Kenya’s prisons would also be subjected to the same treatment if they are released.

Mr Wangchun Chi, 31, from Taipei, the capital of Taiwan, who is also remanded at Industrial Area, says that even though he does not fear being tried in China “because I am innocent,” he wishes things could be different.

“China is a good country, it is a beautiful country but I want it to respect my rights as a Taiwanese,” he says.

Mr Chao Lugian, 28, a Zigong native who is also part of the group remanded at Industrial Area, arrived in Kenya with his wife in September 2014 after learning of the opportunity to make $800 (Sh80,000) a month through an advertisement.

They left their daughter under the care of his sickly grandmother.

“My mother abandoned me when I was eight months old and it was my grandmother who raised me but I could only study up to high school before I became a truck driver,” he says.

While he spends time at Industrial Area awaiting the verdict of his case, his wife is at Lang’ata Women’s Prison on similar accusations and the only time they see each other is during court appearances.

“Sometimes we don’t even get a chance to talk to each other in court because after the proceedings, the women are taken back to their prison and us back to ours,” he says.

Mr Wayne Wong, a Malaysian-Chinese Pastor based in Kenya who promotes cultural ties between the two countries together with his wife Irene, has been visiting and ministering to the remandees every week.

He fears the suspected crimes are unlikely to be taken lightly.

“Fraud is considered a capital offence in China and the government says it has evidence to convict the first batch that was deported. If they are found guilty, they could spend a minimum of 20 years in jail,” he says.

The pastor adds: “Unlike other developed countries, Chinese culture treats offenders as outcasts and the government considers crime, no matter how minor, very seriously even when it is committed in other countries.”

Since their arrest, the inmates say the Chinese embassy in Nairobi has provided little assistance, even though a representative usually shows up during the court sessions, and they have had to rely on their families back home to send money for legal fees and upkeep.

“We understand that the Chinese government should not interfere and we are willing to comply with the legal system here,” says Mr Luo.

The hearing of their case had to be postponed three times due to lack of an interpreter until Mr Wayne volunteered.

They were also denied bail as the court thought they were a flight risk, forcing them to spend their time in remand during the entire period.

Experts say as much as Kenya would want to demonstrate its sovereignty as it did by not extraditing them to China and insisting on trying them first, it is unlikely that it would want to jeopardise its relations with Beijing.

“Given its economic sway, power, global influence and the reluctance of the international community to push back whenever China breaks the law, Kenya has very few options in this matter,” says Patrick Magero, an International relations and peace studies lecturer at the USIU-Africa.

“China is currently the largest donor in Kenya and the government would not want to bite the hand that feeds it,” he says.

Relations between Kenya and China are at an all-time high with trade figures showing phenomenal growth in the last five years since China unveiled a major 10-point China-Africa co-operation plan and an offer of $60 billion of funding support to strengthen its co-operation with Africa.

With this improvement in relations, the number of Chinese visitors to Kenya has also increased in tandem.

“Even though the whole world views China as a huge global economic super power, there is still a percentage of people who the effects of economic growth have not trickled to.”

“A majority of them come from poor rural towns with minimal education and cannot even read and write and, because of the huge population, think they can get their luck elsewhere making them an easy target for human trafficking rings,” says Mr Wayne.

Only time will tell if the inmates will serve their sentences in Kenya or be whisked away wearing hoods.

Some of the 28 Chinese nationals on remand in Industrial Area Prison. PHOTO | JEFF ANGOTE | NATION MEDIA GROUP Chinese Nationals Face Harsh Reality in Kenyan Prisons The most Luo Xongxu knew about Kenya before flying in from China was its diverse wildlife and massive infrastructure projects funded by Chinese money. But, for the