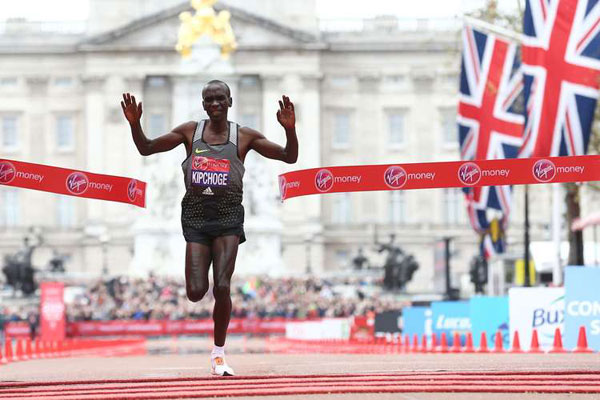 The race zeroed down to Kipchoge, Biwott and Bekele as they crossed the 27km mark in 1:14:49.

Eliud Kipchoge successfully defended his London Marathon title in a course record on Sunday to seal his place in Kenya’s Olympic marathon team.

However, his time was not only enough to break the course record held by Wilson Kipsang of 2:04:29 when he won the 2014 race, but also improved on his personal best of 2:04:00 from his victory in Berlin last year.

The world record of 2:02:57 is being held by Dennis Kimetto from the 2014 Berlin Marathon victory.

The race zeroed down to Kipchoge, Biwott and Bekele as they crossed the 27km mark in 1:14:49.

However, Bekele’s legs wilted against the might of Kenyans as he fell back with Kipchoge and Biwott cruising on past the 30km in 1:29:12.

The race zeroed down to Kipchoge, Biwott and Bekele as they crossed the 27km mark in 1:14:49. Kipchoge retains London Marathon title in course record, missing world best by eight seconds Kenya’s Eliud Kipchoge crosses the finish line to win the elite men’s race of the 2016 London Marathon in central London on April 24,