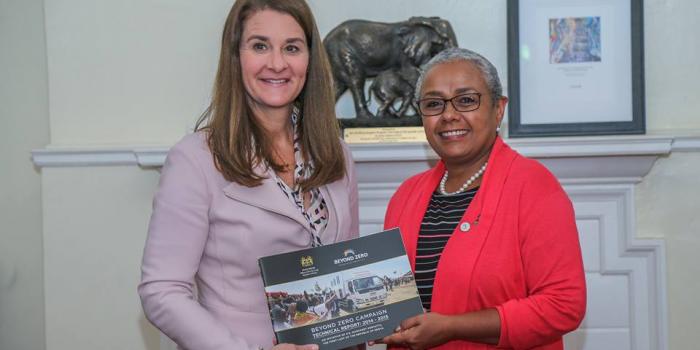 First Lady Margaret Kenyatta’s Beyond Zero campaign on Tuesday received a major boost after one of the richest persons in the world pledged to support it.

Mrs Gates announced the support when she paid the First Lady a courtesy call at State House, Nairobi.

According to Melinda, the Bill and Melinda Gates Foundation will partner with the Beyond Zero initiative to scale up access to quality healthcare services for mothers and children.

“We have been working in Kenya for quite some time and our focus has been on various sectors including agriculture, health, financial services and social justice,” she said.

The move to support the campaign was motivated by the already existing collaboration between the Gates Foundation and a number of county governments across the country.

Mrs Gates stated that her foundation had already invested heavily in maternal and child health, and she was willing to extend support to the First Lady’s health initiatives.

During the visit, Melinda was updated on the positive impact the Beyond Zero campaign had achieved in Kenyan families and the main reason why the campaign was started.

“What made me initiate this campaign was the high statistics on maternal and child mortality,” said Mrs Kenyatta.

The Bill Gates Foundation has also promised to support the Organisation of African First Ladies Against HIV/AIDS (OAFLA).

Mrs Gates was full of praise for the First Lady, pointing out her influence in the society that had brought to the fore issues that helped in achieving developmental goals.