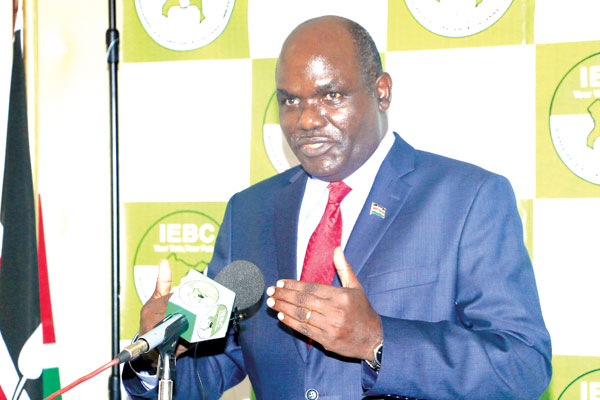 The battle for the presidential seat promises a heated contest after the second Mass Voter Registration (MVR) results showed Jubilee and Cord/Nasa strongholds sharing out numbers that are not separated by wide margins.

Although Jubilee bedrock regions appeared to stand a shoulder above the Cord/Nasa turf, battleground zones that could go to either side are expected to square out the difference, serving a potentially sizzling competition expected to plunge President Uhuru Kenyatta into the ring with the Opposition likely candidate Raila Odinga.

Each side is seen as holding sway in about 20 counties, that is if Nasa, which is still being crafted, will go into the presidential race as one unit, while seven counties are counted as battle grounds that could swing either way.

Preliminary registration totals released by Independent Electoral and Boundaries Commission (IEBC) yesterday showed 3,782,089 new voters were listed against a target of at least six million in the month-long exercise that ended last Sunday.

The figures show Rift Valley, Eastern and Central regions accounting for more than half of the now 19 million registered voters. Rift Valley and Central are largely Jubilee strongholds but Eastern is shared out with the Opposition.

The three regions have listed a total of 10,544,141 voters. The rest of the five regions put together carry the remaining 9,199,575 voters. Last weekend, political scientist Mutahi Ngunyi, on his online Fifth Estate forum, said the additional voters listed during the MVR have not changed the electoral landscape, arguing that Jubilee and Cord shared equally.

According to Ngunyi, who coined the phrase ‘tyranny of numbers’ to describe Jubilee’s advantage in 2013, the situation remains largely the same, only with more numbers of potential voters than in the last polls.

And yesterday, IEBC chairperson Wafula Chebukati said the new voters’ figures represent 62 per cent of the commission’s upper target of six million but 95 per cent of the four million lower target.

The counties that recorded the highest number of new applications were Kajiado, Mandera, Narok, Garissa, Kirinyaga, Kiambu, Wajir, Murang’a, Nakuru and West Pokot in that order.

And taking into account the registration of voters after the 2013 General Election, Chebukati said the electoral commission projects approximately 5.2 million new voters will be added to the roll.

Although the MVR ended on February 19, Chebukati said registration continues at the constituency level and the voter register will be closed on March 7, despite a court order directing extension to May 17.

“At this point, it is important for the commission to take time to collate all the data from the field to prepare the draft register that will be subjected to verification,” Chebukati said.

Registration of prisoners and remandees, which has delayed for two days owing to logistical challenges brought about by a court extension of MVR, kicks off today. Data from Department of Correctional Services indicates that there are 49,867 prisoners in 118 prisons across the country.

“Those to be registered will be adult citizens who will present themselves wit IDs, must be of sound mind and must not have been convicted of an electoral offence in the preceding five years to the elections.

Once registered, this constituency will only vote in the presidential election,” he said. On the other hand, registration of Kenyans in the Diaspora commenced in Uganda, Tanzania, Rwanda, Burundi and South Africa and will continue for 14 days until March 6. With regards to voter transfers, the Commission received 1,001,819 applications.

He said the commission will now process all the data received from the field to its central database for further processing. This entails matching of all records received to ensure there are no duplicates or persons appearing in the register more than once.

Once the commission receives feedback from the field officers, IEBC will then prepare the draft register that will be subjected to inspection and verification by the public, starting May 10.

The commission will then amend, certify and publish the final register of voters as per the law and in readiness for the August 8 General Election.

On timelines for nominations, Chebukati said some parties are already submitting relevant documents. Submission of party nomination rules started on Monday and will run up to March 2 while submission of party membership lists is to commence March 9 to 19.