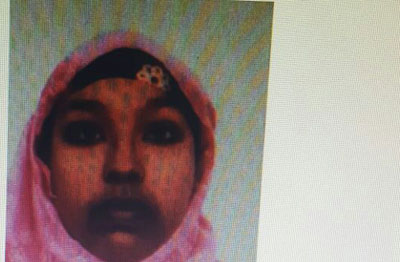 Tasnim Yakub Abdullahi Farah, one of the women killed by police during an attack at Central Police Station in Mombasa on September 11, 2016. PHOTO | NATION MEDIA GROUP

Tension was high in Mombasa following a foiled terrorist attack on the Central Police Station on Sunday.

During the attack, which coincided with the anniversary of the September 11 Al-Qaeda attack on US targets 15 years ago, police gunned down three women terrorists.

The three, who were wearing black bui-buis (head to toe robes), black T-shirts, white trousers and black gloves, had made their way into the station under the guise of reporting the theft of a mobile phone.

Two attackers were of a light complexion while the third was darker. One wore a bullet proof vest, and was short and heavily built.

The 10am attack came just a day before Muslims celebrate Idd-ul-Adha, also known as the festival of sacrifice.

When the two police officers at the reporting desk asked one of the women to remove her veil and reveal her face, she jumped over the counter and started brandishing a dagger which she had concealed under her flowing bui-bui. She then attacked the officers.

A witness, Ms Salma Mohammed, said one officer was stabbed on the neck and chest, prompting his female colleague to flee.

The same attacker then doused herself with petrol and set herself on fire.

“There was smoke all over place. I could not see much and I had to escape,” said Ms Mohammed, who was at the station to seek the release of her husband.

Mombasa County Police Commander Patterson Maelo said one police officer suffered injury to the hip and the other to the arm.

According to Ms Mohammed, two other suspects were waiting outside the reception area and around the entrance of the police station.

The two shouted “Allah Akbar! Sisi ni Al-Shabaab! (God is great! We are Al-Shabaab!)”, as a team of police officers surged towards them.

“The officers fired more than 20 times at the two,” said the witness.

A second witness said he fled from the scene and went to alert officers in the traffic department and others within the station.

BE WARNED
Mr Maelo said his officers acted swiftly and shot the attackers.

A fire engine from the Mombasa County Government also arrived and put out the fire at the station caused by the attacker who had doused herself in petrol.

Soldiers from the bomb disposal unit of the Kenya Defence Forces arrived at the scene at around midday to defuse what was believed to be explosives that one of the attackers had.

However, they later established that the three attackers were only wearing bullet-proof vests, and left.

Two key roads — Makadara and Nkurumah — were closed after the attack and the area remained a no-go zone.

The last time a terror attack was carried out in Mombasa was in early 2014.

Officers from a specialised security unit have been dispatched to targeted estates in Mombasa to conduct a door-to-door search as police try to unravel details of the attack.

“These attackers were strapped in bullet-proof vests, had knives and petrol bombs, a clear indication that they were ready for war. But a police station whose core business is security, is not a wedding venue and you must expect ferocious fire that you have never seen if you provoke the officers,” said Mr Marwa.

He warned that anybody attempting to attack public places “will be met with intensive fire and dealt with mercilessly”.

“These suspects did not succeed because our officers are ever ready to counter any attack. These bad elements should know that anybody who dares stage an attack will be met with ferocious fire as never seen before,” he said.

At a media briefing at the station, Senator Hassan Omar said the attack was unfortunate, coming on the same day as the 9-11 attack 15 years ago.

Governor Hassan Joho described it as “a dark day for Mombasa”, coming only a day after celebrations to mark 10 years since the birth of ODM.

Mr Joho had hosted the celebrations, which were attended by the party leader, Mr Raila Odinga, over the weekend.

“I appeal to the community, leadership and everybody, let’s remain together. To every one of us I say protect your life but also be your brother’s keeper,” said the governor.

He called for security agencies to beef up security and remain alert, and asked the public to help police detect and report suspects.

“Let this incident help us emerge even stronger as a community,” he said.

Mr Joho called on the police to guard public places such as beaches, and urged residents to cooperate with security officers to divulge information.

Woman Rep Mishi Mboko said it was unfortunate that women had now taken to crime.

“I condemn this incident in the strongest terms possible. It is sad to see women involved and using bui-buis to commit such crime. They are painting Islam negatively,” she said in a telephone interview.

Mvita MP Abdulswamad Nassir asked the public to remain calm and condemned the act as unfortunate. He said the act went against Islam.

Sources revealed the three as Tasnim Yakub Abdullahi Farah and Fatuma Omar and a Mariam.

One source said Mariam was previously arrested and questioned by officers from the Anti-Terrorism Police Unit (ATPU).

“She was arrested and released after she was found innocent,” said the source on condition of anonymity.

Police linked the three to the Boni Forest-based Jaysh Al Ayman — an affiliate of Al-Shabaab — which operates in Lamu and Garissa counties.

A police statement indicated that three other suspected accomplices were apprehended after ransacking the house of one of the attackers.

“Further investigations led to a thorough search at the residence of Tasnim Yakub Abdullahi Farah at Kibokoni, Mombasa, where three other suspected accomplices were found and arrested,” the statement read.

Mobile phones belonging to the attackers led police to the location.

Postmortems to be conducted by forensic investigators are expected to establish if they had criminal records, by checking their fingerprints.

Police were yet to establish whether the three were an advance team of terrorists sent to destabilise the station and pave the way for a bigger attack.

“From the look of the attack, it seem they have failed to meet the expectation of those who might have sent them,” said a senior detective.

Attackers’ phones lead to arrest of 3 suspected accomplices Reviewed by samrack on September 11, 2016 .

Share thisFacebookTwitterPinterestEmailWhatsAppTasnim Yakub Abdullahi Farah, one of the women killed by police during an attack at Central Police Station in Mombasa on September 11, 2016. PHOTO | NATION MEDIA GROUP Attackers’ phones lead to arrest of 3 suspected accomplices Tension was high in Mombasa following a foiled terrorist attack on the Central Police Station on