After Kenyatta win, all eyes on Kenya’s embattled opposition chief 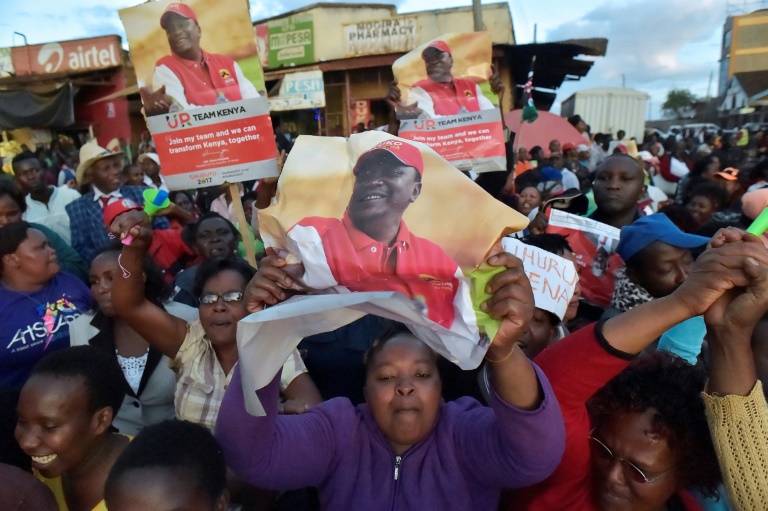 After Kenyatta win, all eyes on Kenya’s embattled opposition chief

Thursday’s contest saw Kenyatta winning a decisive victory with 98 percent of the vote, hailing the result as a vindication of his victory in an initial August poll which was later overturned by the country’s Supreme Court.

But it proved to be a bittersweet victory.

Turnout was just 38.8 percent, which is likely to raise questions over the credibility of a vote that has deeply polarised the East African nation, sparking months of bitter infighting, legal wrangling and violent protest.

“This was nothing more than a revalidation of (the voters’) general will,” Kenyatta said in his victory speech, in which he admitted the result was likely to face further legal challenges.

So far, Odinga has remained silent but has promised to address his followers on Tuesday.

Ahead of Monday’s announcement, security was stepped up in flashpoint areas in the west and in Nairobi’s slums where some opposition supporters could be seen piling rocks and tyres and setting light to a few barricades, AFP correspondents said.

“People are not happy, how can they declare the results when four counties have not voted? This is illegal,” said a man watching a group of several hundred people chanting anti-Kenyatta slogans in the western city of Kisumu, an opposition stronghold.

“Let’s wait to hear what Raila will say, he will give the way forward.”

Despite his successful bid to overturn the results of the August election, Odinga withdrew from the re-run some two weeks beforehand, citing concerns the new vote would be neither free nor fair.

He has since pledged to transform his National Super Alliance (NASA) coalition into “a resistance movement” that will spearhead a campaign of “civil disobedience”.

Odinga has called for a fresh election to be held within 90 days and is likely to throw down further legal challenges to the validity of Thursday’s election.

“We have an announcement to make to our supporters and to the country tomorrow,” a member of Odinga’s entourage told AFP on Monday, saying the 72-year-old would use the opportunity to point the way ahead.

Aside from some scuffles on Monday after the announcement, things have been largely calm since Saturday.

According to figures released by the IEBC election commission, a total of 7,616,217 people cast ballots in Thursday’s protest-hit election. Kenyatta had received 7,483,895 votes to Odinga’s 73,228, which equates to less than one percent of the vote in a sign that the boycott he called for had held.

The vote was the chaotic climax of two months of political drama after the Supreme Court overturned Kenyatta’s victory in August 8 polls over widespread irregularities and mismanagement by the IEBC.

But this time, election chief Wafula Chebukati said he was confident the poll had been “free, fair and credible”.

The current political crisis is the worst to hit the country since a 2007 vote sparked months of politically-driven ethnic violence that left 1,100 people dead.

After Kenyatta win, all eyes on Kenya’s embattled opposition chief Reviewed by samrack on November 1, 2017 .

Kenya President Uhuru Kenyatta’s decisive win with 98 percent of the vote is likely to raise questions over its credibility as turnout was less than 40 percent © AFP / SIMON MAINA After Kenyatta win, all eyes on Kenya’s embattled opposition chief Kenya was once again left waiting Tuesday, as embattled opposition leader Raila Odinga