A new political settlement is required in Kenya going to 2022 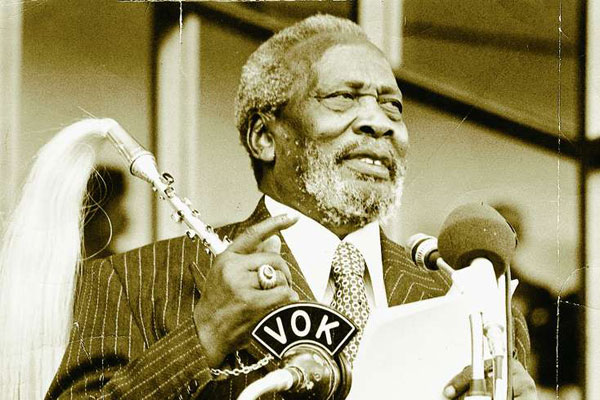 A new political settlement is required in Kenya going to 2022

A while back in the 1990s, a renowned University of Cambridge Historian, Prof John Lonsdale, writing on Kenya noted that “politics in modern Kenya is an enigma; looking at the same thing and events observers – both in Kenya and outside – usually disagree on what they see”.

The disagreements are at times violent and even inaudible as each observer seeks to override observations by others.

Unfortunately, these disagreements are not among political scientists and political economists.

The disagreements are also not among political sociologists.

The disagreements are common among a new group of commentators that the media calls “political analysts”.

Many of them have no idea about basic concepts and analytical tools for analysing political behaviour and institutions but are very keen to make judgements on many events and processes.

But looking at the rolling political game in Kenya today, one can see how right and accurate Prof Lonsdale was two and half decades later.

There is a lot of talk on Kenya and disagreements on what is happening or what needs to be done.

Everyone seems to have his/her own view on the elections.

For each comment made, there is a cynical counter argument.

Optimists and pessimists are also on a clash of their own.

Each of them is holding the position of being right and the other person as wrong.

And if you are wrong, then you belong to another side.

Positions – even wrong ones – now define political alliances and affiliations.

There are certain decisions taken without spending time to examine the consequences of such decisions.

Owing to these disagreements, the country embarked on a process to get a new Independent Electoral and Boundaries Commission (IEBC) a few months ago.

No sooner had the process to establish one completed than new efforts to introduce amendments to the electoral laws were made.

And even if the electoral law is addressed, the political elites either in the ruling party or the challenger coalition – or both – will bring something else on the table.

They will pop up with surprises – more surprising than what we have seen them do thus far.

Many are still approaching political power and its use using the lenses from the old constitution.

Many are seeking to access and control political power without a clear national vision.

This has been the main trend historically.

We have not seen them conflict over the making of a national vision established under the new Constitution.

Although that vision is well established, we have not heard any of the leaders discuss the vision of Kenya.

Neither have the leaders had any dialogue on how to create more wealth.

All we know they do is to fight over what there is in place without talking about how to create more for tomorrow.

Because of this, there is doubt on whether the various political factions in the country have a common national vision or a common understanding on how to reach and maintain one.

These disagreements imply, therefore, that conflicts will remain among the elites as long as there is lack of a common understanding about how power under the new Constitution is arranged and how that power should be used.

Things will change the moment they stop using the old constitutional framework to interpret political and economic events in the country today.

But when will this be? The year 2022 will be the moment to witness the real clash between different understandings of Kenya.

First, the reality of our politics is that the political settlement that governed politics on the eve of independence has continued to influence major events and processes since then.

On the eve of independence, there were political conflicts that generated a need for bargains and compromises among ethnic elites representing different regions of Kenya.

Those elites later institutionalised themselves through control of economic activities and control of political processes in their respective regions.

For instance, Kadu retained control of the Coast, Western and Rift Valley regions.

Former President Moi led the elites in these regions to consolidate the Kadu position.

Their families have continued to dominate politics in their respective counties and even at the national level.

But modern day politics has also led to some of the families losing political influence even though they retain economic influence through the resources they acquired with the support of the government in the 1960s.

They have large tracts of land or other investments both in their counties and at the national level.

Kanu was no different. It retained control of Central Kenya and the Mt Kenya region in general.

The party later sought allies from the Ukambani region.

Although Luo Nyanza was initially in Kanu, the fallout between President Jomo Kenyatta and his Vice President Jaramogi Oginga split the party into two ethno-regional blocs.

Both President Kenyatta and Jaramogi led their respective elites in consolidating their political positions in their regions.

Their families are today dominating politics at the national level.

LIGNIFYING IEBC
The passing of the new Constitution 2010 disrupted this political understanding evolving from the 1960s a little.

In other words, the pre-independence bargains that ethnic elites were struck on how they could acquire political power and exercise it remain to influence major events in the country.

The Kanu-Kadu bargains and the interests that influenced the political practices at the time continue to dominate political behaviour and even how we shape institutions.

The shape and behaviour of institutions and the content of policies in the country is often aligned to this bargain.

The consequence is simple: the institutions we create are often malleable and excessively weakened as each faction emanating from this age-old history seeks to outdo the other.

We make institutions using ethnic-based approaches in order to satisfy the conditions for political bargains that shaped the independence politics.

This is in spite of the new Constitution determining how to establish new institutions and practice politics.

The making and the unmaking of the IEBC must be seen in this context.

It is not the IEBC that we are establishing or shaping.

All that is happening is aligning of interests in line with the type of conflicts that continue to characterise the making of political bargains since the late 1950s on the eve of independence and later after the fallout within Kanu in 1969.

POLITICAL VOLATILITY
The groups that were in conflict have remained in conflict as they struggle to get into power or get the other out of power at different times.

Our stability has often depended on who among them is “included” and who is “excluded”.

Thus when President Moi ascended to power in 1978 he represented the Kadu coalition but could not govern without including some of the Mt Kenya groups and their elites.

He included them but did not allow them to acquire significant economic and political interests.

He also could not afford to rattle the Kenyatta economic interests too.

He excluded the Odinga’s as he created and took on board new elites.

President Mwai Kibaki was generally an outsider but the historical blocs are the ones that brought him to power.

He had to include both interests in order to get to power.

Once he excluded the Odinga’s his government instability set in and he could not govern effectively without “creating” new actors to come in.

All this suggests that electoral and other political efforts in the country will continue to succeed or fail depending on how they align themselves to these bargains of the 1960s.

The dominant ethnic blocs are always in a position to thwart or co-opt new efforts depending on how they perceive such efforts.

But no condition is permanent. The see-saw game of politics and the dominance of these bargains will come to an end in 2022.

The dominance of the two blocs will come to an end.

This will give room to new type of political settlement.

It will possibly give rise to a bargain by new elites who are not tied to the political settlement of the 1960s.

The Constitution of Kenya 2010 will definitely dictate the new type of settlement required to move Kenya to a new direction.

But this is only if the influence of the 1960s does not produce an offspring to dictate the shape and behaviour of institutions in 2022.

Prof Kanyinga is based at the Institute for Development Studies (IDS), University of Nairobi; karutik@gmail.com

A new political settlement is required in Kenya going to 2022 Reviewed by samrack on January 4, 2017 .

Share thisFacebookTwitterPinterestEmailWhatsAppFirst Kenyan President Jomo Kenyatta. Both President Kenyatta and Jaramogi led their respective elites in consolidating their political positions in their regions. FILE PHOTO A new political settlement is required in Kenya going to 2022 A while back in the 1990s, a renowned University of Cambridge Historian, Prof John Lonsdale, writing on Kenya noted