11 PEOPLE FLYING KENYAN FLAG ABROAD (MOST ARE NOT EVEN KENYANS) 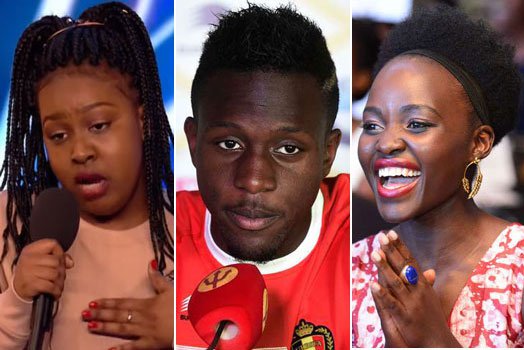 11 PEOPLE FLYING KENYAN FLAG ABROAD (MOST ARE NOT EVEN KENYANS)

By EDDY KAGERA
For a long time, Kenyans have relied on sportsmen to put the country on the world map. But today, people who are not necessarily Kenyans are acting as the country’s envoy, flying the flag high with their achievements.

Born to a Kenyan father and American mother, Mr Obama is perhaps the one person who gives Kenya the biggest dividend. He was the president of the United States – the leader of the free world – until January this year when Donald Trump took over. He is American but his Kenyan roots have benefitted the country.

The Oscar-winning actress is also one of the most recognizable faces in Hollywood. She is the daughter of Kisumu Senator Anyang’ Nyong’o and his wife Dorothy. Lupita has often shied from referring to herself as Kenyan, instead preferring the phrase: born in Kenya and brought up in Mexico. Nonetheless, she is still a win for the country.

The Kenyan is making it big in Hollywood as an actor. He has featured in movies such as television series House, Gone Baby Gone, Twilight and Blacklist Redemption, among tens of other big hits.

She is a 16 year-old British-born Kenyan teen, who on Saturday got a standing ovation and impressed judge Simon Cowell during the season premiere of Britain’s Got Talent. Her stellar performance earned her the first golden buzzer for her performance episode of the show, which means she will now go straight to the live shows. Ikumu, whose parents are Kenyan immigrants, performed a show-stopping rendition of And I Am Telling You by Jennifer Hudson.

This Kenyan-born lawyer migrated to Australia in 1999, made history on Thursday when she was elected as a Senator in South Australia. Gichuhi, who was running on Family First Party ticket, won a special count of the South Australian ballot papers and was later confirmed as the new senator after the High Court considered questions raised about her citizenship. She has since renounced her Kenyan citizenship but is still a valuable envoy.

His grandmother’s craft of being a herbal medicine healer inspired him to become a scientist, and now at the age of 62, he is a senior official at a leading drug manufacturing firm in the United States. What’s more; Dr George Njoroge recently earned the distinction of being the first African to be granted 100 patents by the United States Patent and Trademark Office. Dr Njoroge’s 100th patent was awarded in September last year and it was about his discovery of molecules to treat a variety of diseases.

He is currently a professor of engineering at Iowa State University. Working with a research team he founded in 2014 that now has 11 members, Prof Thuo figured out a complex process in which two different surfaces can be fused using cooled metal rather than heated one. The professor has created a company, Safi Tech, which he says is moving the invention to commercialisation.

He is a British professional boxer in the Welterweight division and a former English super-welterweight champion, according to his Wikipedia page. Ochieng was born in Kaloleni, Nairobi where he raised by his grandmother. Upon her death, he relocated to London at the age of 11, linking up with his parents. So far, he has fought 65 amateur fights altogether with a record of 55-10.

She is a Kenyan chef who was born and raised at the coast. She was named the 2016 Armed Forces Chef of The Year after a gruesome competition. Petty Officer 1st Class Frida Karani beat 21 other contestants after impressing the judges with her culinary skills, which she attributes to her Kenyan grandmother. Ms Karani went to the United States as an exchange student in a hospitality program in Orlando, Florida, in 2006 before joining the Le Cordon Bleu culinary school.

11 PEOPLE FLYING KENYAN FLAG ABROAD (MOST ARE NOT EVEN KENYANS) Reviewed by samrack on April 20, 2017 .