Why Kenya may be ill-prepared for elections 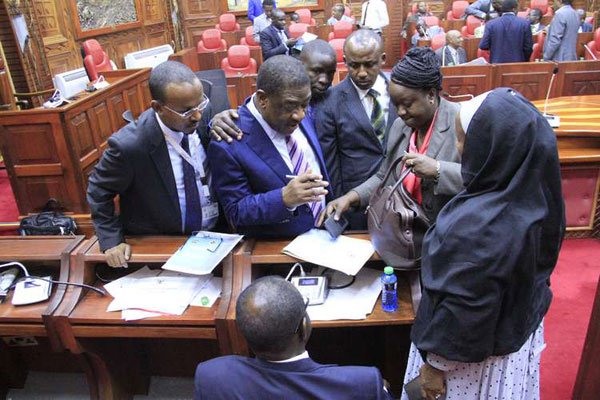 Members of the Senate Legal Affairs and Human Rights Committee during a hearing on the disputed electoral laws at County Hall in December. PHOTO | FILE | NATION MEDIA GROUP

Why Kenya may be ill-prepared for elections

Although all recent Kenyan elections have shown degrees of unpreparedness, the 2017 elections may end up becoming the most ill-prepared poll the country will have.

While the impasse over the fate of the outgoing members of the Independent Electoral and Boundaries Commission was finally overcome through the Joint Select Committee that the ruling Jubilee and opposition Cord established to address outstanding questions that would allow the elections to go ahead, there had already been substantial delays in getting the country to that point.

The delay has since been compounded by a series of obstructionist measures that have been witnessed during the implementation of the deal that was agreed by the Joint Select Committee. One of the problems that caused this further stalling was a deadlock in agreeing a package that would constitute a “dignified exit” for the outgoing commissioners, as had been commanded in the agreement between two political parties.

The agreement provided that the outgoing commissioners could only leave office after new ones were appointed, creating an inbuilt disincentive to hurry the process towards their replacement.

The plan to appoint new IEBC commissioners also suffered delay when the selection panel was forced to vacate the initial shortlist of applications for the position of chair after the applicants were found to be wanting. The panel then re-advertised the position.

The work of the selection process has not been without its own controversies. The applicable law required the panel to identify two finalist candidates for the position of chair, for the President to pick one, and a further list of nine candidates out of which the President would fill the six positions of commissioners.

Questions have been raised over the selection criteria applied both by the President and the panel after relatively lower-ranked candidates were preferred over their better positioned competitors.

There have also emerged questions as to the suitability of the proposed chair, Wanyonyi Chebukati, following allegations that a law firm he is associated with was involved in unethical practices. The selection panel was placed in the extraordinary situation of taking out paid space in newspapers to defend its selection.

The new IEBC commissioners will thus take office under some cloud of doubt. Assuming that they receive the approval of the National Assembly, they will have about six months to prepare for the elections, a period that is significantly less than the not-less-than-two-years that was recommended by the Kriegler commission.

Difficulties in preparing for the elections have significantly been compounded by Jubilee’s decision to introduce amendments to the Election Laws (Amendment) Act, 2016, the law that codified elements of the agreement reached with Cord.

In the National Assembly, the debate on the amendment was stormy and was characterised by physical confrontations among opposing legislators, as police cordoned off the debating chamber, creating political tension in Parliament and around the country.

The main grievances by Cord revolved around the speed at which the Speaker of the Assembly seemed prepared to allow the processing of the law, and a view that since the law had been agreed on in a bipartisan process, any amendments should follow the same process.

A decision by Speaker Justin Muturi to refer the Bill to the Senate for concurrence shifted the attention to the upper house, which also passed the Bill without alteration. The chaotic events that had been witnessed before the Assembly provided the context in which the Senate convened to deliberate on whether to give its concurrence to the Bill.

The Senate set out to demonstrate a maturity that had lacked when the National Assembly debated the same Bill, with the Senate Speaker Ekwee Ethuro demanding a withdrawal of the police positioned outside the chambers.

Also, unlike in the National Assembly where debate was rushed, Mr Ethuro demonstrated a willingness to allow for consultations, directing the Legal Affairs committee to arrange sessions for the receipt of public views.

In the end, however, the debate and vote in the Senate reflected the same partisan positions that had been evident in the National Assembly, a demonstration that the Senate was unable to transcend the political divisions that the Bill had created at all levels. Even the proceedings of the Legal Affairs committee took the same party lines as would later be witnessed during the debate in plenary.

The opposition attempted to prevent debate in the Senate through a technical interpretation of what a session before Senate meant. However, the Speaker overruled the objection and allowed the debate to proceed.

While all the public submissions made to the committee opposed the passage of the Bill, these had no persuasive effect and were not even referred to when the vote was eventually taken.

UGLY PROCEEDINGS
Ultimately, it will be difficult to avoid the perception that the political establishment used the relative respectability of the Senate to sanitise the ugly proceedings that had taken place in the National Assembly.

To pass the Bill, the majority needed, and was able to obtain, the 24 votes that constitute a simple majority of the 47 delegations represented in the Senate. On the other hand, the task by the opposition was to prevent the majority from achieving the 24 votes.

In the end, much turned on the decision on the vote by the delegation from Kisii County, whose leader, Senator Chris Obure, reportedly donated a last-minute proxy in favour of the little-known Senator Hosea Ochwang’i, who cast the Kisii vote in favour of the amendments.

There were compelling arguments about the need for Senator Ochwang’i to consult with his co-delegate, Janet Ong’era, a requirement of the Constitution, and also about what should be made of the fact that Senator Obure, elected on an ODM ticket, had apparently defected to Jubilee without seeking a fresh mandate from the electorate that constituted his delegation.

Senator Gideon Moi, who had been expected to vote with the opposition, ended up supporting the Jubilee side. Senators of Kajiado and Narok counties, who had come under pressure from both Jubilee and Cord, stayed away during the vote, thus preserving their neutrality on the debate.

During the debate, the leadership of Speaker Ethuro was tested when a number of senators claimed that he had allowed a little more time before ordering the closing of the doors that would pave way for the voting to commence, to allow Senator Ochwang’i into the chambers. Claims also surfaced about irregularities affecting the Samburu delegation vote.

While the Mr Ethuro has avoided the withering criticism that has been reserved for his National Assembly counterpart, there is a sense in which he could have better guided the proceedings during the debate. Viewed in totality, the proceedings before the Senate had a certain sense of inevitability about them.

In retrospect, it seems that the Senate was set for a pre-determined outcome and that no reason was ever going to be good enough to stop that. Under the circumstances, all the motions before the vote were an act of window dressing, which would not affect the outcome.

Like the Supreme Court, which had promised so much but ended up delivering so little, the senate finds itself in the same position where, on an issue of some national importance, it was unable to rise to levels of leadership that would help to keep the country together.

The country goes into elections with Jubilee using its majorities in both houses of Parliament in a crushing manner that has left the opposition badly humiliated, and the country badly divided.

In the event of a major disagreement going forward, it is difficult to see what authorities remain which can mediate through such a crisis.

Why Kenya may be ill-prepared for elections Reviewed by samrack on January 8, 2017 .

Share thisFacebookTwitterPinterestEmailWhatsAppMembers of the Senate Legal Affairs and Human Rights Committee during a hearing on the disputed electoral laws at County Hall in December. PHOTO | FILE | NATION MEDIA GROUP Why Kenya may be ill-prepared for elections Although all recent Kenyan elections have shown degrees of unpreparedness, the 2017 elections may end up becoming