When Kibaki and Raila threatened to kick out US envoy 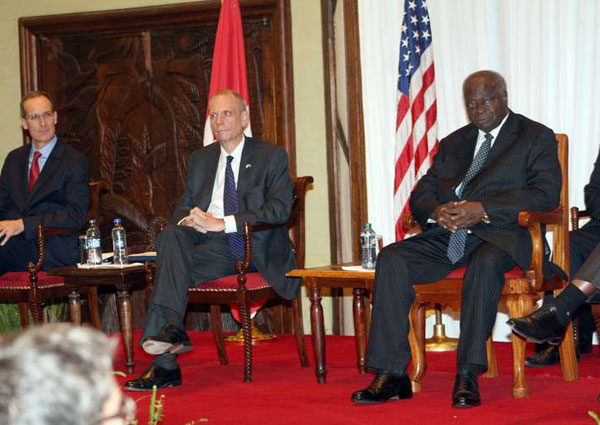 When Kibaki and Raila threatened to kick out US envoy

In Summary
One of the crises the State Department dealt with was the fallout from the release by WikiLeaks of more than 250,000 cables sent to Washington from embassies around the world.
While many revelations like this are fairly harmless, Mrs Clinton will be more embarrassed by the emergence of American assessments over the motivation of European powers, especially France, which led efforts to topple Gaddafi.
Nato’s air campaign in Libya resulted in a humanitarian catastrophe and turned the country into a failed state, something which has returned to haunt Clinton in her campaign for the US presidency.
ADVERTISEMENT

By MURITHI MUTIGA
More by this Author
Retired President Mwai Kibaki and Raila Odinga, then prime minister, threatened to kick former American ambassador Michael Ranneberger out of the country after WikiLeaks released cables from the US embassy to the State Department, which were sharply critical of the Kenya government.

This is one of the revelations contained in more than 30,000 emails sent between Hillary Clinton and her senior staff members during her time as America’s top diplomat.

The communications, which were archived and indexed by the anti-secrecy website WikiLeaks earlier in the week, shine a light on the views of Americans about key leaders across the world.

The emails came to light as Mrs Clinton fought to defend herself after revelations that she used a private server rather than secure government servers to send and receive correspondence while she served as Secretary of State.

The dispatches contain numerous revelations about how America’s top diplomats see the world and the strategies they use to advance their interests.

One of the crises the State Department dealt with was the fallout from the release by WikiLeaks of more than 250,000 cables sent to Washington from embassies around the world.

The cables revealed that Mr Ranneberger had told his bosses that Kenya was a “flourishing swamp of corruption” and that the US ambassador was funding a national programme to help youth come up with alternative leadership.

A top Clinton aide, Cheryl Williams, flagged the annoyance of Mr Kibaki and Mr Odinga at the description in the cables. She notes they had told the ambassador “they would not tolerate his activities in the country”.

Johnnie Carson, who was the assistant secretary of state in charge of African affairs, was drafted in to deal with the matter: “I spoke to Ranneberger several times yesterday (December 12, 2010) and I have a call (to) Prime Minister (to talk on this) and other issues,” he wrote to Ms Williams. “I am following this closely.”

The emails also reveal how the Americans regularly track Chinese activities in the region, the efforts by lobbyists to persuade Mrs Clinton to intervene in the constitutional review debate in Kenya and other details such as how the experience of a chaotic rally in Ghana during President Clinton’s time in office saw the Secret Service stop Mr Obama from addressing any large rallies during his visits to Africa.

Outside the region, the dispatches contain numerous embarrassing details the Americans would have hoped would never have seen the light.

The dramatic ouster of Colonel Muammar Gaddafi is discussed with revelations of American analysis that France’s Nicolas Sarkozy wanted Gaddafi out to advance French economic interests and to neutralise Libyan efforts to end French dominance of West Africa.

One of the emails records how Laurie Rubiner, a top official at the pro-choice lobby Planned Parenthood, wrote to Mrs Clinton in July 2009 urging her to join the debate on abortion raging as part of the constitution review process in Kenya.

“I understand you are going to Kenya next week and while I know the trip is primarily focused on trade issues, I wanted to flag an issue for you because I know it is near and dear to your heart,” she wrote.

INTRIGUES
Ms Rubiner pointed out that “Kenya has one of the strictest anti-abortion laws in Africa — it is illegal unless a woman’s life is at risk and criminalises both the woman and the provider.”

She urged Mrs Clinton to speak up on the issue and advocate a more liberal position in the law.

However, a Clinton aide wrote back to Ms Rubiner saying the issue was not on the agenda.

Eventually, the clause which Ms Rubiner feared clerics were advocating, one declaring that “life begins at conception” was replaced by a more relaxed provision.

On China’s presence in Africa, a top aide to Mrs Clinton wrote to Washington saying the State Department needed to pay more attention to the fact the Chinese were not only investing in infrastructure projects but were also pumping money into the media field.

“StarTimes, which is backed by the Chinese government, made its first move into Africa in 2002 and now has operations in 10 African countries, including. Nigeria, Tanzania, Uganda, Rwanda, Burundi, CAR, Guinea and Kenya,” the note said.

“They are also actively pursuing licences elsewhere and have about 1,500 employees on the around. Typically the licences they are awarded allow them to program between 30 to 40 channels of video.”

The official suggested that American companies should be encouraged to also enter the field and vie for market share.

At least from the evidence of the emails, American officials appear to have had little access to President Kibaki and they primarily handled their affairs through the office of the Prime Minister.

In one dispatch, deputy assistant secretary of state Reuben Brigety reports he “spent eight hours yesterday directly with PM Odinga, travelling in his vehicle as we toured the refugee camps at Dadaab, walking next to him as we talked with refugees in the hospital and reception centre, sitting with him and (Foreign minister George) Saitoti during meals, and sitting next to him on his private plane en route back to Nairobi (during which we talked one-on-one for an hour)”.

Mr Brigety promises to offer “detailed readouts” of the meetings through official channels but reports progress had been made in persuading Kenya to open a new refugee facility which the country had previously refused to sanction.

“(Mr Odinga) is deeply seized with this crisis in Somalia and decided on the spot to open the long-promised Ifo camp, something the international community has been asking for at least two years now. But specifically, I’m writing to let you know that at the end of the trip, the PM specifically asked me to pass his kind regards to Secretary Clinton and A/S Carson – ‘Hillary’ and ‘Johnnie’ as he said. I’ll be back in the office on Monday and happy to talk more about conversation with the PM if you’d like.”

GOLD ACCUMULATION
Explaining why President Obama, despite his vast popularity in Africa as America’s first black president would not be making a speech before large crowds on a visit to Ghana an aide to Mrs Clinton wrote there was a near-disaster when her husband addressed a crowd estimated at more than 500,000 people during his visit to Ghana in 1998.

The Secret Service report on the trip said “the overheated, overcrowded, overwhelming event left some in Clinton’s party worried that he’d been shot” after he suddenly moved forward to help a woman who was nearly being crushed at the front shouting “Get back! Back off!”.

Mr Clinton’s doctor also feared he would collapse from heat stroke after his host Jerry Rawlings wrapped a ceremonial robe on his shoulders on top of his suit and a decision was made at the time that travelling presidents should only address small, controlled gatherings on foreign trips.

While many revelations like this are fairly harmless, Mrs Clinton will be more embarrassed by the emergence of American assessments over the motivation of European powers, especially France, which led efforts to topple Gaddafi.

A note from one of her most trusted allies, Sidney Blumenthal, contains this analysis of the situation: “On April 2, 2011 sources with access to advisers to Saif al-Islam Gaddafi stated in strictest confidence that while the freezing of Libya’s foreign bank accounts presents Muammar Gaddafi with serious challenges, his ability to equip and maintain his armed forces and intelligence services remains intact.”

The note said Gaddafi had amassed a large stockpile of gold, which the French were concerned about.

“According to sensitive information available to this these individuals, Gaddafi’s government holds 143 tonnes of gold, and a similar amount in silver. During late March, 2011 these stocks were moved to SABHA (south west in the direction of the Libyan border with Niger and Chad); taken from the vaults of the Libyan Central Bank in Tripoli.

This gold was accumulated prior to the current rebellion and was intended to be used to establish a pan-African currency based on the Libyan golden Dinar. This plan was designed to provide the Francophone African Countries with an alternative to the French franc (CFA).”

Blumenthal said the sources estimated the gold was worth more than $7 billion (Sh700 billion).

He added: “According to these individuals Sarkozy’s plans are driven by the following issues: (a) A desire to gain a greater share of Libya oil production,
(b) Increase French influence in North Africa, (c) Improve his internal political situation in France,

(d) Provide the French military with an opportunity to reassert its position in the world, (e) Address the concern of his advisers over Gaddafi’s long term plans to supplant France as the dominant power in Francophone Africa).”

BEE ATTACK
Nato’s air campaign in Libya resulted in a humanitarian catastrophe and turned the country into a failed state, something which has returned to haunt Clinton in her campaign for the US presidency.

On a less contentious subject, the emails record that Mrs Clinton had a near-miss with a minor disaster when, at the end of her visit to Malawi, a swarm of bees descended on the farewell party in Lilongwe.

An aide to Mrs Clinton sent her a story summarising the events, in an email with the title, BZZZ.

“According to press reports, Malawi and American officials all scampered for cover while Clinton ran onto the jet for cover. ‘There was a slight panic as the bees winged across the airport.

People could be seen running away to keep cover as the Secretary of State swiftly boarded her plane to avoid any stings,’ a witness told the Nyasa Times.”

An aide, Philippe Reines, wrote a note to Clinton and another aide Jacob Sullivan, gently mocking the Secretary of State.

“Jake and I never scurry. For any reason. Very strict no scurry rule. And we shame others into adherence. Do we need to sit you down for a talk?”

Mrs Clinton simply replied: “Hmmm. Is this from that new wire service PIR?”

When Kibaki and Raila threatened to kick out US envoy Reviewed by samrack on March 26, 2016 .

Share thisFacebookTwitterPinterestEmailWhatsAppWhen Kibaki and Raila threatened to kick out US envoy Switzerland Ambassador to Kenya Ralf Heckner (left), United States Ambassador to Kenya Robert Godec and former President Mwai Kibaki during the launch of two projects at Safari Park in Nairobi on February 18, 2016. Evidence from leaked emails reveal that American official had little