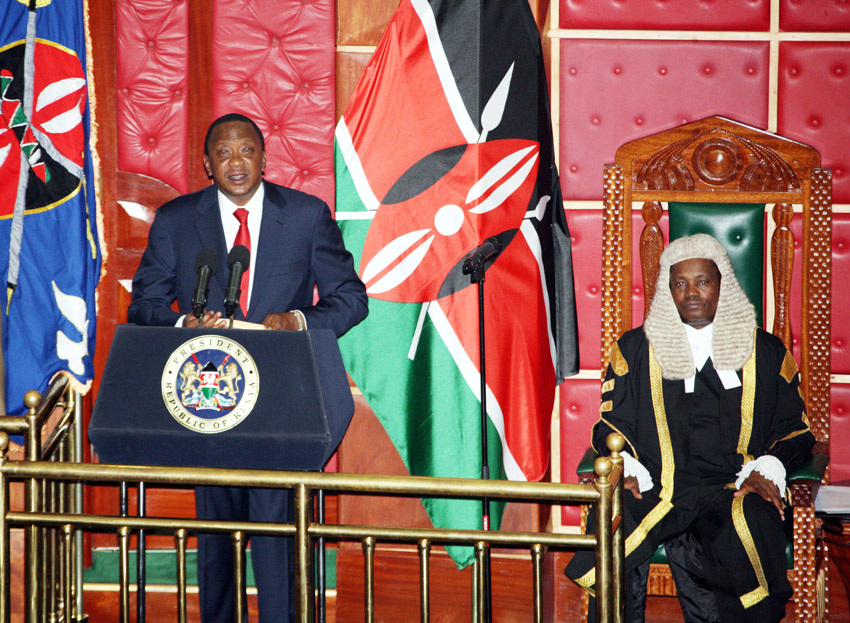 President Uhuru Kenyatta addressing Parliament on the State of the Nation. [Photo/Courtesy]

President Uhuru Kenyatta is set to address the nation on Thursday on the gains and challenges that the Jubilee government has experienced three years after taking over power.

The address comes two days after Deputy President William Ruto addressed a County Hall session on the milestones made over the last three years.

Also Read: VIDEO: Kenyatta to make his 3rd State of the Nation address

It is widely expected that some of the key issues that featured in DP Ruto’s address on Tuesday will re-emerge in the President’s speech with key focus on infrastructural development, power connectivity, education, health, war on corruption and national unity.

Of key importance will be President Kenyatta’s stand on corruption coming a year after the release of the infamous ‘list of shame’prepared by the Ethics and Anti-Corruption Commission (EACC).

Since then, six Cabinet Secretaries have resigned over corruption allegations in what Ruto termed as a first in Kenyan history.

The CSs were later replaced in a Cabinet reshuffle in December last year.

Criminal proceedings have also been instituted to investigate the involvement of those mentioned in the corruption allegations with most of the cases still on.

In his address on Tuesday, Ruto reaffirmed the government’s commitment to fight graft saying no one will be spared in the crackdown.

Since coming to power, Jubilee government has been dogged by a series of corruption allegations including the loss of Ksh 791 million at the National Youth Service (NYS), the Eurobond scam, apparent loss of Ksh 180 million at the Youth Fund and Enterprise Development among others.

In a bid to get to the bottom of the claims, various Parliamentary Committees have been formed to probe the matter and recommend actions against those responsible.

Notably, the President’s focus will be drawn to last month’s announcement by EACC that asset worth Ksh 500 million belonging to suspects of the NYS scandal have been frozen.

EACC chair Philip Kinisu further stated that 161 of the 175 graft suspects whose names appeared in last year’s ‘list of shame’ have been charged.

According to National Assembly Majority Leader Aden Duale, the President’s address will also touch on Article 10 of the Constitution which focuses on national values and principles of governance which binds state organs, state officers, public officers in the application and interpretation of the Constitution, enactment and interpretation of the law and the implementation of policy decisions.

The principles of governance highlighted in this Article include patriotism, national unity, sharing and devolution of power, the rule of law, democracy and participation of the people, equity, social justice, inclusiveness, equality, human rights, good governance, integrity, transparency and accountability.

The Garissa Township MP also noted that a scorecard of Jubilee’s achievement in its three years in power will also be in the agenda with key focus on education, health care, infrastructure development for instance the Standard Gauge Railways among others.

In his address on Wednesday, Ruto said the government had set aside 7.2 % of the country’s GDP for the development of the education sector with part of the budget going towards supporting education policy, legal and curriculum reform.

“In the last budget education sector was allocated Ksh 300 billion, the other resources  go towards supporting free primary and day secondary education, digital literacy program , development of digital content, building  capacity of teachers  and rolling out of computer laboratories,” he said.

The issue of the Independent Electoral and Boundaries Commission (IEBC) and CORD’s push for its disbandment may also feature in President Kenyatta’s speech having been a topic of discussion in recent days.

CORD has openly come out to oppose the existence of IEBC threatening to boycott the next elections if the commission is not reformed.

Voter registration may also be a point of focus for the President especially after IEBC failed to meet its target of registering 4 million new voters between February 15th and March 15th.

Speaking during his tour of Nakuru County a fortnight ago the president promised to increase the allocations for IEBC to ensure voter registration is extended and allow more people to register as voters.

What Kenyans should expect from President Uhuru’s State of the Nation address Reviewed by samrack on March 30, 2016 .