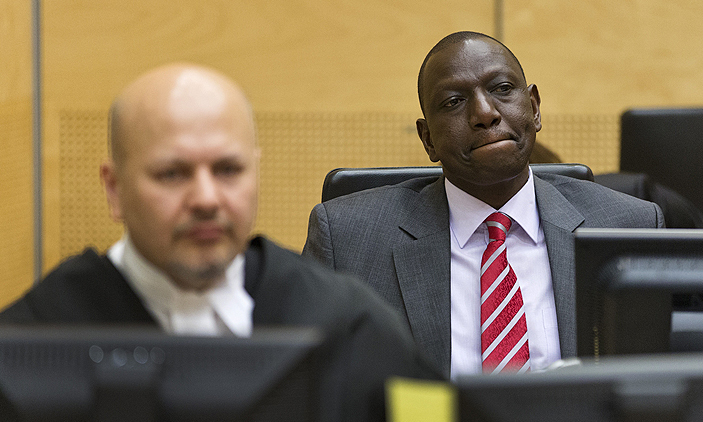 Kenya’s Deputy President William Ruto (R) reacting as he sits in the courtroom before the trial at the International Criminal Court (ICC) in The Hague. AFP

THE HAGUE – War crimes judges will rule on Tuesday whether to throw out a case brought against Kenyan Deputy President William Ruto for his alleged role in post-election violence several years ago which left more than 1,300 dead.

The judges at the International Criminal Court will hand down their ruling on April 5 on motions brought by Ruto and his co-accused, radio boss Joshua arap Sang, to either acquit them or find there is no case to answer, the court said in a statement on Wednesday.

“This decision will be notified only in writing. No hearing will be held,” the statement said, adding it would be made public before 5:00 pm (1500 GMT) on the day.

Ruto, 49, and Sang, 40, have both denied three charges of crimes against humanity namely murder, forcible deportation and persecution arising out of Kenya’s disputed elections in late December 2007 and its violent aftermath in early 2008.

Prosecutors say more than 1,300 people died and some 600,000 others were left homeless in Kenya’s worst wave of violence since independence from Britain in 1963.

The prosecution closed its arguments in the main trial in September 2015, and the defence has yet to start.

Instead Ruto’s defence team has called for the charges to be dismissed, arguing the ICC prosecutors have failed to prove his role in post-polls bloodshed and told the court in January that the case was “in tatters.”

Sang’s team has maintained there is “no case to answer.”

That announcement was the ICC’s biggest setback since it was established in 2002 to try the world’s worst crimes, and came amid allegations of witness intimidation, bribery and false testimony.

Kenya has fought an international campaign against the cases, leading African accusations that the ICC is unfairly targeting the continent’s leaders. – See more at: http://www.newvision.co.ug/new_vision/news/1420875/icc-rule-bid-throw-kenya-ruto#sthash.rGGjWbdT.dpuf

ICC to rule next week on bid to throw out Kenya Ruto case Reviewed by samrack on March 31, 2016 .

Kenya’s Deputy President William Ruto (R) reacting as he sits in the courtroom before the trial at the International Criminal Court (ICC) in The Hague. AFP ICC to rule next week on bid to throw out Kenya Ruto case THE HAGUE – War crimes judges will rule on Tuesday whether to throw out a case brought